More than a year and a half into the pandemic, it’s obvious to Cracker Barrel off-premises will never return to what it was pre-COVID.

Cracker Barrel also passed the first anniversary of its new digital store, a platform that allows customers to order takeout and retail items in one shopping cart. Since its debut, the store garnered more than 43 million sessions and handled over 3.4 million orders.

The chain’s first digital restaurant, Chicken ‘n Biscuits by Cracker Barrel, expanded to 500 locations—roughly 75 percent of the company’s footprint—in the final week of the first quarter. The menu features a Southern fried chicken box and bucket, hand-breaded chicken tenders, and sides like coleslaw, green beans, and macaroni and cheese.

A second digital concept, The Pancake Kitchen by Cracker Barrel, also launched in the final week of Q1 and resides in about 100 stores. The brand offers the restaurant’s classic buttermilk, pecan, blueberry, confetti, and chocolate chip pancakes, with the usual sides, such as fried apples, bacon, and sausage patties.

“We believe this brand helps us address unmet demand for breakfast offerings via third-party delivery in many geographies,” she noted during Cracker Barrel’s Q1 earnings call. “Additionally, we remain optimistic about the sales potential of the Chicken ‘n Biscuits brand, which helps us leverage excess kitchen capacity during underutilized dayparts and target additional users of the brand who might not otherwise visit a Cracker Barrel restaurant.”

The rollout hasn’t been without its bumps, however. Cochran said Cracker Barrel faced supply chain issues with chicken tenders for much of the quarter, and ran into trouble with technological integration as the brands were stood up.

In light of those obstacles and the fact that both virtual brands underwent expansion just three weeks ago, the company doesn’t have a full understanding of what the new channels will bring, the CEO said. Once Cracker Barrel ensures execution, the company will discuss how to market Chicken ‘n Biscuit and The Pancake Kitchen across third-party delivery marketplaces.

“I don’t think we have a great, clear read to disaggregate, except to say that we’re pleased with it at the outset,” Cochran said. “Both of the brands, we’ll look to see if there’s additional stores that we can open them, and which stores that were already open have strong sales and why. We’ll continue to look at the offer and the pricing as we go.”

Growth of the digital-only concepts coincided with the roll out of the company’s first ghost kitchen, aptly named Cracker Barrel Kitchen. The delivery location, based in Los Angeles, offers a streamlined version of the brand’s menu as well as items from both Chicken ‘n Biscuits and The Pancake Kitchen.

Cracker Barrel views the ghost kitchen as “100 percent incremental” and a chance to reach new guest in urban markets. The chain plans to open additional locations in L.A. in the near future. As for the long-term, Cochran said there’s potential to bring “the homestyle food of Cracker Barrel” into more urban areas across the country. 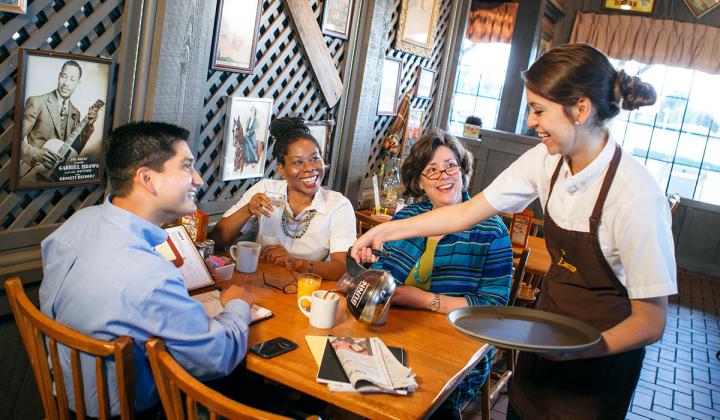 In Q1, Cracker Barrel faced commodity inflation of 7.3 percent, driven by significant increases in pork, beef, and oil, offset by 5.5 pricing and favorability of product mix.

The brand’s rising off-premises channels fueled same-store sales, which rose 1.4 percent in Q1 compared to 2019, and that’s coming off a 6.8 percent decline in the fourth quarter. The sales recovery was also driven by improved staffing levels. Recruitment efforts, like Cracker Barrel’s new virtual orientation program, helped the chain hire an average of more than 2,000 employees per week.

Cochran said elevated staffing will prove crucial as the company heads into what’s historically the most active time of year.

“I believe we’ve largely, if not completely, closed the gap in the back of the house, so we’re feeling really good about where we are in grill cooks,” the CEO said. “I think in front of the house, specifically with servers, we’re working hard to hire even more. But we do feel good about where we’re positioned going into the busy season, and we think that those improvements in staffing is certainly a meaningful part of how we’ve been able to achieve the sales recovery that we’ve seen.”

Jennifer Tate, the chain’s senior vice president and chief marketing officer, said that after three and a half months of data, pricing hasn’t negatively impacted traffic or menu mix. Because of this, the chain plans to take another price increase in the third quarter, above its typical range of 3 percent.

“We feel OK about that,” Tate said. “We've always had a really strong equity in the area of everyday value, and we’re still thought of over lots of years of having quality homestyle, scratch-made food at a fair price. We don't do LTO, coupon, dealing. It's everyday value all the time. And so we've still got a lot of great offers every day. Lunch features at $6.99, dinner meal starting at $7.99. So we think we've got plenty of room to take more pricing in Q3.”

For the full fiscal 2022, the chain expects commodity and wage inflation in the high single digits, capital expenditures of $120 million, and the opening of three Cracker Barrel stores and 15 Maple Street Biscuit Company locations.

How to Market Your Restaurant, Minus the Big Budget
The Cheesecake Factory Rolls Out Gift Card Bonus Promotion
Friendly's to Offer Free Sundae with Purchase from 'Happy Ending' Menu

How the Art of Sous Vide Can Assist with Food Inflation
Golden Corral Adds Wings, Chicken, and Tenders to Buffet Menu
IHOP Store to Offer Choco-Pancake for One Day Only