Catering to college crowds does not mean scrimping on the quality of food or service for Amici Italian Café.

The Classic Italian Chain Coming to a College Near You

College students are not a new market segment for Amici Italian Café. In fact, two decades ago, the concept was founded by a group of new college grads.

As undergraduate in the early ’90s, Chris Torino, like many other college students, worked in the restaurant industry. His foodservice career didn’t stop when he earned his degree, however. Shortly after graduating from the University of Georgia, in Athens, Georgia, he along with two classmates opened the first Amici Italian Café a few miles down the road from their alma mater in Madison, Georgia.

A second location was added in Milledgeville, Georgia, two years later. Amici Italian Café expanded to four locations before the company began to franchise, opening three such locations in 2009.

Mike Torino, Chris’s dad, joined the parent company, Amici Food Group, as a management consultant in 1996 and was appointed president in 2001. He is a founding member of Amici Franchising and currently serves as CEO.

Mike Torino says the recession stalled growth from 2009 to 2011, but stores were added again beginning in 2012. With a mix of seven corporate and franchise locations in spring 2017, Amici Italian Café announced it would build a new location in Madison, Georgia, where the restaurant group is headquartered, and a new corporate location in Gainesville, Georgia. The bigger news, however, was that Amici was going regional and had awarded a 20-unit franchise deal to Stonemont Financial Group, a private investment firm headquartered in Atlanta. 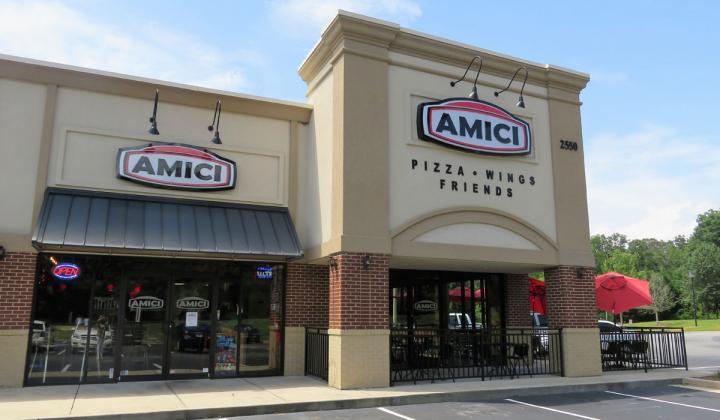 Stonemont has plans to open new Amici restaurants across the Carolinas, hoping to duplicate the success of the brand’s Georgia college locations on campuses across the Southeast. The first of these locations is on the ground floor of a new private student living development adjacent to the campus of Clemson University, in Clemson, South Carolina. Called Plaza One89, the building will house 45 students in two- and four-bedroom furnished apartments on the upper floors, with Amici serving both students and the public on the ground floor.

While Torino says the restaurant is a great fit for the Clemson student housing project and is popular with students at many of its other locations, Amici is not being remade as a college concept.

“This isn’t a strategy that has evolved,” he says. “We are not limiting ourselves to the college market. Our strategy is to take a look at markets individually and determine if they make sense. It has to be the correct thing to do.”

The chain gained a strong student following on the campuses in Milledgeville, the home of Georgia College & State University, and in Athens where the University of Georgia is located. Introducing themselves to students at their college-town locations has made Amici a well-known brand throughout the state and enabled a smooth introduction to non-college Georgia markets.

"When college students reach 21 they appreciate a mellow atmosphere where they can relax and enjoy a beer."—Chris Torino.

For example, Torino says the Macon and Milledgeville locations of Amici are “college situations,” whereas stores in Greensboro and Covington are not.

“In the past, being near a college did not preclude us from going into an area; likewise we’re not limiting ourselves to college markets,” Torino says.

While it is not the brand’s first location near a college campus, the Clemson location is the first Amici to be located outside of Georgia, where it is well known, winning many awards through the years including “Athens’ Best Wings,” and “People’s Choice” for pizza and chili cook-offs in Milledgeville and Madison.

Nevertheless pizza, wings, and beer are what endear Amici to college students, Torino says. All locations have Wednesday Wing Night with specials on wings that appeal to cash-strapped college students and anyone on a budget. Those wings are available in traditional or boneless styles with sauces from the milder BBQ, lemon pepper, and sweet chili to the bolder X-Hot, XX-Hot, and XXX-Hot.

The star of the show though, is always the gourmet pizza on a hand-tossed crust. Guests can build their own pizza, or choose from a variety of specialty pies like the Woodsman with pepperoni, prosciutto ham, and mushrooms and the Summer in Turin with diced tomatoes, feta cheese, olive oil, garlic, and basil. The daily combo with one slice and a small salad or soup is a popular lunchtime choice for business people looking for a quick bite on their lunch hour and students between classes.

Torino says if an Amici is located near a university, food and drink specials cater more to the needs and wants of college customers, and college locations tend to offer live entertainment more frequently. Still, catering to college crowds does not mean scrimping on the quality of food or service. Torino says many college kids in Georgia grew up going to an Amici with their families and expect that same quality as their hometown location.

“The concept has always been family friendly,” he says. “In a college setting, it’s a place college kids can come in and enjoy good food in a nice atmosphere.”

All Amici locations—including those near college campuses—also feature full bars with at least 10 beers on tap, including local brews. Torino says the staff are always vigilant of the drinking age, and uses a bracelet system during live entertainment nights to easily identify who can and cannot be served.

“But when college students reach 21 they appreciate a mellow atmosphere where they can relax and enjoy a beer,” Torino says.

In developing college-housing properties at campuses in North and South Carolina, Stonemont looked at several restaurants. In fact, it was a group of Stonemont employees who were also University of Georgia alums that suggested Amici. The property’s proximity the football stadium is also a huge boon as the restaurant’s versatility can attract students, parents, and spectators alike.

Amici locations vary in size from 2,500 to 4,500 square feet. Some have gone into existing spaces, and others have been built new. They are in strip malls and freestanding buildings in both suburban and downtown areas. The new Clemson location is about 3,600 square feet with a somewhat industrial vibe thanks towood, metal, and concrete finishes. It haslarge windows that open onto a patio area for outdoor dining. There is a private room for meetings and parties.

Torino says the goal is to make every Amici restaurant feel homey, like a family living room.

“Amici means friends in Italian,” he says. “At Amici Italian Café, friends come together, sit around the table, and enjoy themselves and the delicious food and great service.”

Based on the predicted success of the Clemson location, Stonemont expects to open more campus locations within student housing developments in Columbia and Charleston, South Carolina, and Raleigh-Durham, North Carolina.