Testing is underway in significant markets to ensure operational efficiency and usability of technology.

More than seven months into launch, Chili’s virtual brand, It’s Just Wings, is everything the company hoped it would be.

The response to the $150 million concept has been strong, and the brand is still learning how to maximize its potential, including expansion into takeout. Currently, It’s Just Wings is only offered through delivery on DoorDash.

“We’re going to take It’s Just Wings and develop it further,” CEO Wyman Roberts said Wednesday during the brand’s Q2 earnings call. “We have it in the one channel. We’re learning every day really how to maximize that channel. We’re in our first sports season and obviously that brand resonates well during sports, so we’re pushing the marketing inside and outside the channel.”

“Then we’re pushing to takeout,” he continued. “That takes an infrastructure build that requires technology and coordinating a marketing effort behind that. But we want to build that brand out, and then at the same time, get our operations lined up for full restaurant capabilities as well as full takeout—both Chili’s and virtual brands. That’s all happening now.”

The move comes as Chili’s same-store sales slipped 6.3 percent in Q2. In the past four weeks, comps have hovered in the negative 5 to 6 percent range due to lingering effects of COVID restrictions. When excluding California and Illinois, Chili’s No. 2 and No. 3 markets, comps grew by 2 percent—and that’s with an average of 50 percent capacity. It’s Just Wings played an integral role in January’s performance because of its connection to sports like the College Football Playoffs and NFL postseason.

CFO Joe Taylor said Chili’s ability to market on the DoorDash platform around major events allowed highly incremental sales and set a number of records in the period, making it clear why the brand is ready for takeout.

The full-service chain is working on technology that will lead customers to an It’s Just Wings website. Once that infrastructure is built, marketing efforts around the brand, particularly through digital and social channels, will intensify. Beforehand, most of the awareness has originated from discovery on DoorDash or word or mouth.

Testing is underway in significant markets to ensure operational efficiency and usability of technology. The brand said takeout should roll out by the end of the year.

Roberts explained the move isn’t necessarily motivated by DoorDash customers asking for more options because those consumers are ordering to specifically receive delivery. The motivation comes from the strength of the product and reception on DoorDash, which leads to broader possibilities for consumer acceptance. It’s important to note that takeout comprises two-thirds of the off-premises program, so Chili’s knows customers would be willing to pick up It’s Just Wings. Takeout also provides more access to consumer insights as DoorDash only shares general marketing information.

There are costs with building the infrastructure for takeout, but the end result is promising because of the removal of delivery fees and lower costs for consumers.

“Little heavier on the front end, especially with to-go,” Roberts said. “Very profitable on the back end as the brand gets established. We’re just in the process of understanding, OK, what’s it going to take to get a little bit more brand awareness out there.”

Roberts said that as soon as It’s Just Wings is built out, Chili’s will look toward the next virtual brand.

“As we introduce a virtual brand in test, [we] first understand how viable it is from two aspects—how big are the sales from a consumer perspective and how operationally executable is it in our restaurants,” he said. 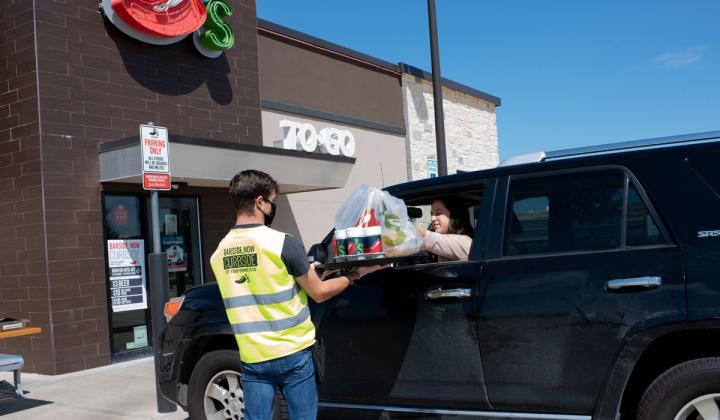 “When COVID’s over and you do the case studies of why a state that closed restaurants still has some of the worst results, it’s just interesting, right?” CEO Wyman Roberts said. “It comes back to, if you’re running restaurants the right way, it’s not the driver of COVID, and I think California has felt that.”

To that end, Chili’s is making investments to ensure a fully integrated digital experience. Essentially, customers may use tabletop devices to order before the server arrives. The waiter will then see that, bring the food, and start the experience.

Roberts said it will improve table turns and the efficiency of servers. Those are side benefits, but both have key implications to the restaurant on a busy Friday or Saturday night.

“You’re off and running significantly faster,” Roberts said. “You can close out at the same time on that device and you eliminate some of the stretch points that can come into an occasion if you’re in a hurry. If you’re not, we’ve got servers there that will take your order and bring your experience to you at whatever pace you want. It allows you to control that more. We’re very excited about the opportunity to offer this to guests. We think it will pick up.”

As of January 20, 82 percent of Chili’s and 69 percent of Maggiano’s dining rooms were open. A big piece of news for the brands is California is now allowing outdoor dining. The Golden State has gone back and forth with dining room restrictions in the past year, but in the times it’s returned, the response has been immediate. The restaurants open parking lots, pitch tents, and watch as consumers begin to line up.

The CEO acknowledged that California has a COVID problem, but he believes the solution was unnecessarily heavy on restaurants and ineffective in stopping the crisis.

“When COVID’s over and you do the case studies of why a state that closed restaurants still has some of the worst results, it’s just interesting, right?” Roberts said. “It comes back to, if you’re running restaurants the right way, it’s not the driver of COVID, and I think California has felt that.”

Maggiano’s has suffered more from COVID restrictions. The second quarter is typically the brand’s strongest, but the pandemic eliminated its robust banquet and corporate catering channels. As a result, comps dropped 47 percent and traffic sank 37.8 percent in Q2. Operating income dropped from $21.5 million in fiscal 2020 to a loss of $900,000 in 2021, and operating margin decreased from 16.7 percent to 5.5 percent. The restaurant earned $64.3 million in total revenue, down from $126.2 million in fiscal 2020.

“With the second quarter now behind us, we expect the impact from Maggiano’s to consolidate the performance of Brinker to be more muted as we head into the rest of the fiscal year, particularly as the brand recovers from both an improved operating environment and the implementation of performance-driving initiatives,” Taylor said.

Taylor said Chili’s is reaching a point in its evolution where it can increase unit development. The brand previously indicated that it wants to reach 1 to 2 percent growth on an annual basis. The CFO said that should start as the company moves into 2023 and 2024.

“We’re seeing some changes in the real estate market,” Taylor said. “I think we are seeing conversion opportunities at a much higher level, which are interesting because I’m seeing our ability to access certain markets now that you probably wouldn’t have had the same level of access to pre-pandemic. I’m excited about that opportunity. We’re positioning the company so we can grow at that level from both a capital perspective and a team perspective.”

President Joe Biden has made it clear that raising the minimum wage is a priority for his administration.

In fact, Democrats in both houses reintroduced a bill that would raise the federal minimum wage from $7.25 to $15 by 2025. The current level has remained in place since 2009.

Chili’s appears well-suited to take on the potential change since its No. 2, No. 3, and No. 4 markets have all increased minimum wage beyond the federal requirement.

Roberts said in states with higher labor costs, restaurants leverage technology to create efficiency, which allows employees to make more money because the tip pool is spread among fewer people.

The brand also looks at ways to be more effective around tip pooling. Roberts explained in these higher-cost situations, the company can mitigate extra expenses by letting the tip pooling bring up wages.

The CEO feels Chili’s has an advantage because other brands will have to deal with the wage pressures from a pricing perspective. For example, Chili’s is able to utilize its 3 for $10 deal in California despite the minimum wage being $15 and the elimination of the tip credit wage.

“How long we can afford that price point in that market, I don’t know,” Roberts said. “But it is out there and it has been out there for a couple of years even as the price and the wage rates have gone up. So I think our scale really helps us in this environment. And at the end of the day, these things across the industry are going to be much more difficult for restaurant operators.”

“… The way you deal with this most effectively is through technology and through systems, and we have the ability to do that and have been doing that. And we are excited about rolling some of this technology to other markets fairly soon.”

At Chili’s, servers average around $20 when tips are included; the average is closer to $30 in California.

Taylor said he doesn’t think anything will change in this fiscal year or even the next, but Brinker will move forward with the assumption that something will happen in the future.

“This will be a debate,” Taylor said. “I think it is going to be front and center for an extended period of time this year. I have been involved in a couple of minimum wage debates over the years, and they do tend to be intense discussions. There is passion on both sides of the equation. They tend to extend over periods of time.”