Chili's new Team Service Evolution model prevents food orders from flooding the kitchen all at once.

The system requires fewer bodies and increases wages for servers.

That initial pilot was a failure, CEO Wyman Roberts said Wednesday during the company’s Investor Day. The model worked well, but the technology was lacking.

“It would break on a Saturday night in the middle of volume,” Roberts said. “It just couldn’t handle capacity.”

In the ensuing years, Chili’s decided to remove third-party partnerships and build the model internally with proprietary software, which left the brand with an efficient system ready to be rolled out to the entire footprint.

The new Team Service Evolution model has three key pieces, including iPad minis with POS software for each server, new kitchen display screens in the bar and beverage area, and a fresh labor model with a runner position to assist servers on the floor.

Instead of waiting in line to use a POS monitor in the back of house, servers take orders using their iPad Minis. Often, drinks are brought to guests by the food runner before the server has left the table. Chili’s said the setup creates an improved food and drink order flow to the kitchen, which prevents food orders from flooding kitchens all at once.

“TSA allows for smoother shifts and simplifies the job for our team members by creating clear direction of what their roles are,” the company said in a video explaining the new system.

The food runner position forms a new career progression for Chili’s employees as well, which begins with host, and flows to runner, server or bartender, certified shift leader, manager, and general manger. Roberts said this gives inexperienced employees a clear line of sight toward earning six figures. According to Chili’s Sustainability report, Chili’s general managers across 1,600 stores earned an average of more than $87,000 in salary and bonuses in fiscal 2021, but the restaurant aims to boost that to $100,000 over the next three years.

Roberts said the Team Service Evolution model is in half of restaurants currently and will be rolled out completely by December. The CEO noted that because servers remain on the floor, they can take a bigger section, which results in higher wages. Hourly workers earned an average of $16.95 in fiscal 2021, including tips, bonuses, and sick pay, but Brinker wants to increase that to an average of $18 by fiscal 2023.

Roberts also said the model requires fewer bodies, and that should lead to more efficient service.

“That means we get to keep the best of them,” Roberts said. “On a Friday night, when you need more bodies, you’re oftentimes going to somebody to come work in the restaurant who’s not that skilled, that’s only working one to two shifts per week. That’s the last place you want somebody that’s not very skilled is in your restaurant messing with your kitchen and your POS when you’re very busy.” 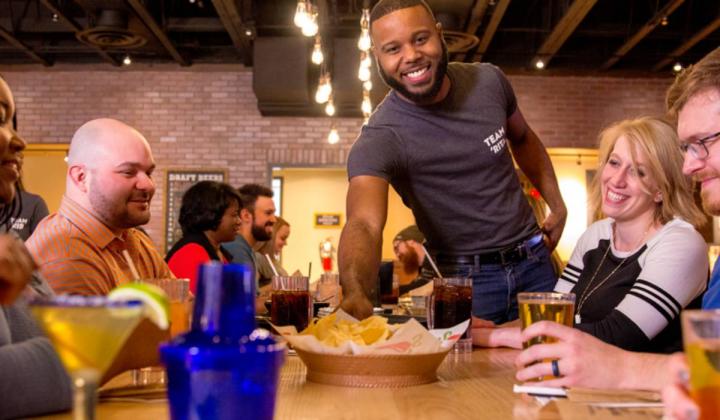 Chili’s earned $58,000 in average weekly sales per restaurant in July.

The new model comes as Brinker faced pressure from staffing shortages, the Delta variant, and commodity inflation in the first quarter. Chili’s same-store sales grew 8.8 percent in July compared to two years ago, but decelerated to a 3.1 percent increase in August. In September, comps lifted 7 percent, and through October 13 (the beginning of Chili’s Q2), they grew 7.3 percent.

Maggiano’s comps upped 1.6 percent in July, but lowered 2.2 percent in August and 0.5 percent in September, compared to two years ago. Through October 13, same-store sales lifted 1.5 percent.

Chili’s earned $58,000 in average weekly sales per restaurant in July, but $55,000 in August. The figure dipped to $54,000 in September. CFO Joe Taylor explained average weekly sales typically remain flat between July and August, yet this year proved to be uncharacteristic because of all the macroeconomic factors.

Taylor estimated Chili’s lost roughly 3–4 percent in comps because of short-term constraints. Regions most challenged include the Midwest and California.

“That’s an opportunity for us,” Taylor said. “As pleased as we are with our ability to drive topline, we’re still leaving sales on the table. We still have restaurants that have not been able to fully open, staffing issues are forcing some restaurants into limited hours, inability to open fully, particularly when you think about Fridays and Saturdays where you really get those volumes.”

The good news for Chili’s is restaurants are starting to capitalize on the opportunity. Month-to-date in October, average weekly sales per unit are at $55,000.

Roberts said turnover is decreasing and restaurants are basically staffed to pre-COVID levels, on average. There are some hot spots where stores are struggling more, but he believes the system is past the “911” situation it experienced in the past.

At higher career levels, retention remains steady. General managers have an average tenure of 11.6 years, while directors of operation stay 19.2 years and vice presidents of operation 17.9 years. Brinker has also observed employees returning to restaurants after leaving for another industry. The manager rehire rate is 10 percent, versus 4 percent in 2019, and the hourly rehire rate is 21 percent, compared to 13 percent in 2019.

To improve workplace quality, Brinker leadership implemented multiple changes to remove stress for restaurant employees, including how it trains new managers. Beforehand, managers learned from modules and were then tasked with training other managers. The company is now accelerating and testing a method in which it offers live classes from its headquarters and trains all managers across labor, production, and their own well-being.

In addition to training, Brinker has made sure restaurants aren't losing sales because of short supply. Roberts shared employees once drove U-Haul trucks to restaurants when a distributor didn’t have enough drivers.

“We are responding to these COVID headwinds with increased focus on hiring and retention efforts, and working with our partners to gain further stabilization of the supply chain environment,” Roberts said in a statement.