The brand is looking to alleviate 'structural' labor and commodity costs, and offload 'transitory' pressures.

As he explained, sales are “solid” and traffic numbers are “extremely good.” Chili’s same-store sales grew 6.5 percent in Q1, and that pace has remained the same through the first month of the second quarter. The brand’s traffic was down 3.2 percent in Q1 compared to two years ago, but that’s an improvement from the 8.8 percent decline in the fourth quarter. Versus last year, traffic increased 10.5 percent.

The real near-term challenge—which rings true across the industry—is navigating pandemic-induced labor and supply chain issues that are impacting cost structure. Restaurant operating margin was 10.4 percent in the first quarter, down from 11.6 percent last year.

“From a top-line perspective, we’re sitting in a good spot,” Roberts said during Brinker’s Q1 earnings call. “ … After 40 years, I’ll take managing costs over searching for sales and traffic any day. Those are good problems to solve because they’re largely within our control.”

Chili’s is scheduled to take its third pricing action of the fiscal year with the next menu update in two weeks. Following that rise, the brand will carry an incremental 3 percent price uptick compared to the year-ago period.

When Brinker considers pricing changes, it focuses less on peers and more on the customer and how the shift affects their ability and desire to engage, Roberts said. He also noted pricing has been tested both conceptually from a consumer perspective and also in market.

“We’re feeling really good about the responses, and the strength of the value propositions post-price, and that gives us a lot of confidence that we can continue the traffic momentum that we have post the price increase that’s coming,” the CEO said.

The price hike is intended to offset what Brinker believes is “structural” labor and commodity costs. Moving forward, if pressures thought to be transitory turn out to be more structural, Roberts said the company will use a “disciplined approach that protects our traffic performance and keeps our brand strong.” He remained confident Brinker has pricing power if necessary, especially in the virtual brand and delivery channels.

Brinker faced commodity inflation in the mid-single digit range in the first quarter, with significant pricing from pork and chicken driving the increase. That’s projected to rise to the higher-single digits as the company approaches the second half of its fiscal year, CFO Chris Taylor said.

For poultry in particular, the CFO said it’s not an issue with the number of chickens, but a “production kink that’s really throwing some wrenches into the system and creating that incremental cost.”

“I think over time, we do have a strong belief that that is going to correct itself," Taylor said. "We’re hearing anecdotally from partners that they’re seeing better hiring rates. … As they work through some of the systems, we would expect to see greater production capacities, which should definitely impact the price as you go forward.”

“Our chicken contract runs into the fourth quarter into the April timeframe,” he added. “While you start those conversations in real time as to what that will look like, we’re going to watch that very closely as we move through the next several months and start moving more towards days that you might traditionally commit for new contracts and keep our options as broad as we can and there for as long as we can.” 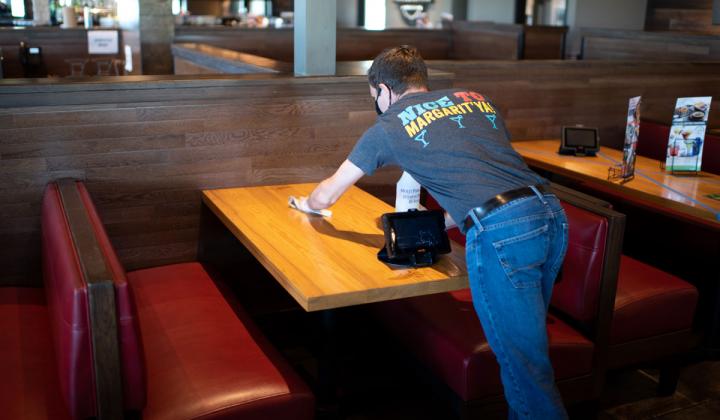 Chili’s ended the period with 1,234 domestic restaurants and 362 stores around the world.

In terms of labor, staffing shortages cost Brinker 3–4 percent in sales during the first quarter. But matters are improving on that front; Roberts said labor has returned to pre-pandemic levels on average, with some hot spots, specifically in the Midwest and California. Through October, the company added an average of 1,000 employees per week.

Because of the greater than normal influx of new team members, Brinker experienced outsized costs in training and overtime. Taylor said the company considers these costs above normal operating levels, and he expects them to stay that way in the near-term. Brinker is working to remove these transitory costs from the system by the back half of the fiscal year.

“We are absolutely seeing better response to recruiting back into the restaurant,” Roberts said. “ … Now we’re in that process of just getting them trained up and proficient at the work.”

Looking ahead to the holiday season, he said traffic at Chili’s is historically elevated, but not in an extreme manner, so Roberts feels confident about the chain’s staffing levels supporting higher guest counts.

However, he added Maggiano’s could present a bigger issue if consumer demand rises above what’s been typically seen in the past.

“They’re working aggressively to staff up,” Roberts said. “That may be a little bit more of a headwind, but I think they’re going to be fully staffed to be able to handle business that we expect. Now if the environment is overheated, we may not be able to take all of the potential business that we could have gotten if it just becomes a really gangbuster holiday season.”

The Italian chain’s same-store sales decreased 0.2 percent in Q1 compared to 2019, and slipped 0.9 percent in October. Traffic rose 39 percent year-over-year, but sank 28.9 percent versus two years ago. Taylor said Maggiano’s will evaluate its pricing after the holiday season.

Chili’s ended the period with 1,234 domestic restaurants and 362 stores around the world. Maggiano’s has 54 units in the U.S.