Chili's Gets its Mojo Back

Sales and traffic return to positive territory for the classic chain. Can Chili's keep it up?
August 2018 Danny Klein

There was a lot at stake for Chili’s in fiscal 2017. CEO Wyman Roberts went as far as calling it “an important and pivotal year for our business,” during an August 14 conference call. The brand was carrying a streak of negative same-stores into the calendar, with a menu too broad, operations too complex, LTOs that hurt execution, and technology that failed to leverage Chili’s standing or core strengths.

What followed was a broad strategy intended to simplify operations and enable consistent execution. Notably, Chili’s slashed its menu by 40 percent and focused on improving its burgers, ribs, fajitas, and margaritas. There were a bevy of other changes, but let’s first look at the results.

Three quarters into this new strategy, Chili’s just reported its best performance in more than three years. The brand achieved same-store sales gains of 0.6 percent and positive comp traffic of 0.8 percent in the fourth quarter. For the full year, Chili's saw its comps decline 1.1 percent compared to a 2.3 percent drop in 2017.

The traffic flip is even more prominent (at company stores):

When Chili’s began the year with a nearly 9 percent traffic drop, Roberts said trends were starting to turn. The brand cut back its menu about two months prior to reporting the results and saw tickets taking longer than 15 minutes fall 40 percent. This was just the start of the revitalization. Fast forward and Roberts said Chili’s has cut its longest ticket times in half over the course of one year. 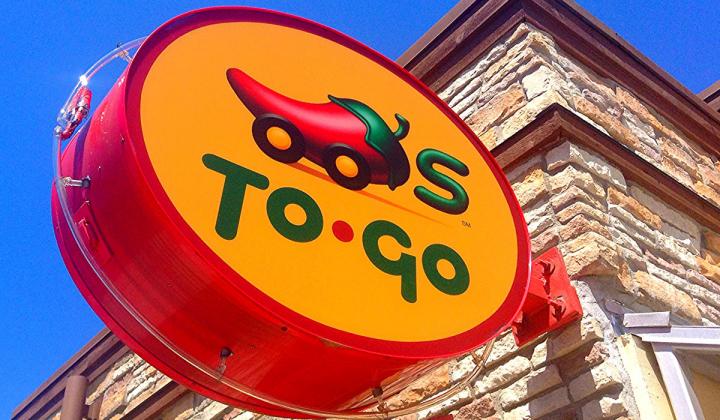 Off-premises are playing a key role for Chili's. Delivery is up next.

In Q4, Chili’s traffic outperformed the industry by more than 200 basis points. Roberts said the comps sales reflect a significant investment to grow the brand’s loyalty database. Chili’s actively promoted its My Chili’s Rewards Program, which became its focus after the brand bailed on American Express Co.’s Plenti Rewards program last quarter. Customer feedback showed the program was too complex. Chili’s rerouted to My Chili’s Rewards and also abandoned a points-based system. Electing instead to focus on growing its database. Roberts said Chili’s grew “our already sustainable database by more than 25 percent,” in the quarter.

“This gives us additional marketing leverage throughout the year to drive incremental visits for the sizable portion of our guest base. We saw a meaningful increase in the percentage of our guests who engage with us through this platform and will continue to expand our direct marketing capability to optimize the efficiency of those channels,” he said.

Roberts said Chili’s would be able to leverage these names and relationships for months, if not years. To get there, the brand took a 1 percent hit in pricing, which Roberts said was an investment and marketing strategy he believes will pan out long-term. Chili’s expects to get back into the positive 1.5 percent pricing territory moving forward.

“The strategy is working. Sales and traffic are both up, guests are telling us through their satisfaction scores that their experience is faster, the food is better, and the value is best-in-class,” Roberts said. “And our team appreciates this back to our roots strategy and the commitment to simplify their experience. Engagement score is at all-time highs, and our employee turnover is significantly better than the industry.”

Chili’s recorded double-digital off-premises growth in the quarter. The brand is seeing its mix of to-go between 11.5–12 percent of total sales. Roberts said the mix isn’t moving as much as some casual brands “because we are growing the whole pie.”

“We see year-over-year mid-teens to upper teens growth on a very consistent basis in our to-go business. But we are growing both to-go and in-dining room operations, which gives a little less impact to the overall mix,” he said.

Meanwhile, Chili’s delivery is a very small slice of that graph. Roberts said a shift is coming, however. “… We are going to be leaning more aggressively into delivery as we move throughout the fiscal year, and I would anticipate it having some impact on our ability to move the business forward, particularly in the second half of the fiscal year,” he said.

A lot of this will come down to simplification. Roberts said some restaurants have multiple tablets for multiple delivery partners, and “you just have to really wonder about how easy it is and how consistent the operators are able to manage that information flow.”

"We’re excited about the things that we've kind of put out there in terms of the base experience at Chili's, focusing on simplification, delivering a better guest experience, getting the food out hotter faster, and then improving the recipes. We know that makes a difference in the quality of experience, and that's fundamental to anything we do moving forward." — Wyman Roberts, Chili's CEO.

Chili’s is talking with partners and suppliers, he added, to see how it can integrate delivery into the same technology platform so it can streamline the process for operators. In sum, Chili’s wants to make sure it can deliver a consistent guest experience, whether it’s in the restaurant, via pick-up, or delivery. And that extends from food quality to operational performance.

Leverage and putting pressure on independents

Chili’s continues to use its capital to invest in the guest experience. One aspect of this is a reimage program that just completed its first market. The average cost per restaurant is $210,000–$230,000, and Chili’s is scheduled to complete 250 restaurants by the end of the fiscal year. It’s expected to take place over the course of three fiscal calendars. As a whole, Chili’s is investing $140–$150 million on its existing base in improvements for the year.

“The feedback from the guests has been positive. Obviously, they really appreciate, and we see the biggest movement, as you would expect, in the atmosphere scores, the relevance, the cleanliness, and that's the piece of the project that gets the most playback. But we're also excited about the opportunity to give guests a better guest experience when they come in to the restaurants,” Roberts said.

This, along with the tech piece and other investments, is something Roberts said is starting to alter the bar and grill discussion in foodservice. As earnings are showing, he said, the large national brands are taking more consistent share quarter to quarter, in regards to the macro numbers.

“I think the independents are—they're struggling a little more than some people would actually like to acknowledge,” Roberts said. “And there's always going to be the hot item and the hot concept in whatever town you're in. But there's a lot of pressure on a lot of those smaller independents. And in the bar and grill category, they continue to make up a big piece of the industry. And they're not all the hot new sexy thing, and they're struggling, I think, with a lot of the headwinds that the industry is facing. And they don't have the leverage, the scale, the insight to deal with it. And I think we're putting a little bit pressure on them.”

It all comes down to “getting the food out hotter, faster.”

As a company, Brinker reported adjusted earnings per share of $1.19 in Q4. Quarterly revenues came in at $817.1 million. Chili’s revenues summed $688.2 million in the quarter, up 0.8 percent from the prior-year period. Maggiano’s same-store sales were up 0.3 in Q4.

Moving forward, Chili’s will continue to focus on the factors that have helped turn the competitive tide.

“We’re excited about the things that we've kind of put out there in terms of the base experience at Chili's, focusing on simplification, delivering a better guest experience, getting the food out hotter faster, and then improving the recipes. We know that makes a difference in the quality of experience, and that's fundamental to anything we do moving forward,” Roberts said.

Chili’s is working to strengthen its value proposition as well. The brand’s $5 margaritas and 3 for $10 offering was a good example. Roberts wouldn’t offer more color on future promotions, but hinted it would remain a key driver.

“With regard to the specific offers and how we're going to dial in our value proposition, we're going to keep that a little closer to the vest,” he said. “[The] 3 for $10 has been a strong offering out there for us. We're excited about what it does for the business, both dayparts and however that works for us. And it's within our margin structure to make it work.”