One of the pandemic’s defining legacies will be the acceleration of off-premises, and arguably no casual-dining brand has leveraged that growth more than Chili’s and Maggiano’s parent Brinker International.

In June 2020, just a few months removed from the start of a global crisis, Chili’s rolled out virtual concept It’s Just Wings to more than 1,000 kitchens at once. The ghost brand surpassed $170 million in domestic sales during fiscal 2021, exceeding the original goal of $150 million.

Brinker followed with Maggiano’s Italian Classics, which is now in more than 700 stores across the U.S.

Because of this new arsenal, the company is now ready to penetrate densely urban areas with smaller, off-premises-focused locations—something that’s been nothing more than an after-thought for Chili’s, which primarily sticks to suburban outlets.

In partnership with a third party, Brinker opened an urban-based ghost kitchen in Manhattan, offering Chili’s and It’s Just Wings. And that’s only the beginning; there are plans to test two 1,500–1,800-square-foot inline locations adjacent to college campuses in Dallas and Columbus, Ohio, in the near future.

“I never thought I’d see the day when I’d see a Chili’s in Manhattan, but it’s been up and running for a month, and we’re encouraged by its early performance,” says CEO Wyman Roberts, during Brinker’s Q2 earnings call.

Roberts noted Brinker’s experience with operating multiple brands in a tight kitchen space will prove valuable as it ventures further into these pilots.

In the past year, a handful of restaurants have partnered with third parties like Kitchen United, REEF Kitchens, and Franklin Junction to quickly expand their reach in previously unobtainable trade areas, without the physical infrastructure investment. For instance, TGI Fridays announced in October that it signed up for 300 ghost kitchens with REEF. Denny’s revealed a similar partnership with REEF, although an exact number wasn’t given.

In other cases, casual-dining brands have leaned into off-premises by adopting a fast-casual spinoff, as seen by IHOP, TGI Fridays, Buffalo Wild Wings, JINYA Ramen Bar, P.F. Chang’s, Hooters, and others.

“All are off-premise centric in their approach, but I think there are different ways to approach different incremental markets, and so we’re making sure we understand all of those options,” Taylor said. “I’m not going to put a specific metric out there yet as a target, but it’s meaningful enough to spend a lot of time on it.”

“We think there are a number of different markets, be they urban dense, be they college campuses that respond extremely well to off-premise, both to-go and delivery,” he added. “There could be some fill-in markets in other places that we’ve penetrated significantly on the suburban rings that we may go into.”

Chili’s currently has more than 20 full-sized restaurants in its pipeline, a pace that it hopes to carry forward. The casual-dining leader finished Q2 with 1,234 domestic restaurants and 365 internationally. Maggiano’s ended the quarter with 54 stores. 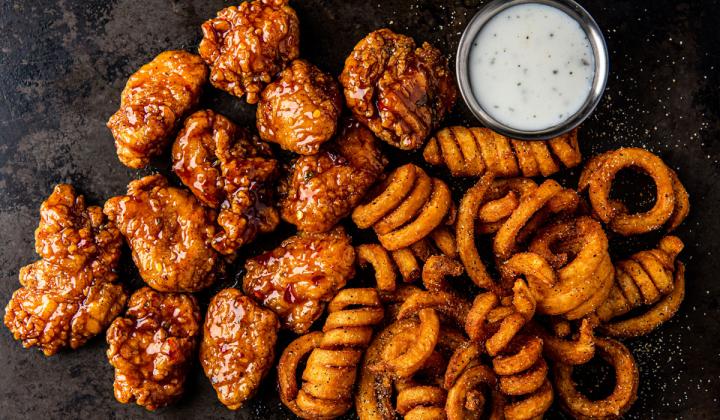 Chili’s has rolled out a new “Team Service Evolution” labor model in which servers use a tablet to take orders as opposed to punching in orders at a POS system.

The good news for Brinker is that it has more employees on a per restaurant basis than it did prior to COVID. Instead of two or three applications rolling in at a time, managers are now seeing 10 or more.

That’s why the company is doubling down on its retention efforts, beyond just a paycheck. One example is a virtual learning platform that allows Brinker to train hourly workers and managers from the restaurant support center.

Roberts described it as a “live interactive experience that improves the speed, quality, and consistency of our training while reducing costs and burden on our restaurant managers.” The system has led to a 20 percent improvement in retention of new hourly employees.

Chili’s has also rolled out a new “Team Service Evolution” labor model in which servers use a tablet to take orders as opposed to punching in orders at a POS system. The method requires fewer bodies, meaning more tables for waiters and higher wages.

For managers, Brinker is focusing more on leadership development programs for new and tenured leaders, like the “Women Take the Lead” initiative.

Historically, the rehire rate for Chili's managers (those who left, but came back) has been in the low mid-single digits. That rate is now more than doubled. It’s even higher for hourly workers.

“What we’ve seen with turnover, is if they’re training well and onboarded into the brand well, then they stay longer and they’re actually stickier and they get through that first 30-60 days,” Roberts said.

To mitigate rising food and labor costs, Chili’s has increased prices by more than 4 percent. At Maggiano’s, it’s a 5 percent hike with the latest menu launch.

Roberts, however, isn’t too concerned with customers lowering to quick service or turning to at-home consumption. Instead, he believes Chili’s will benefit from guests stepping down after dining at premium fine-dining and upscale concepts.

“If you just think about the amount of steak consumers have eaten during COVID, it’s kind of interesting,” Roberts said. “That’s usually a higher-priced item, it’s higher-check-average concepts. … We control what we control, and what we can control is our value propositions and the quality of our brands. We have one of the strongest value propositions in the industry and casual dining.”

Brinker views labor inflation as more structural and long-term, but commodity volatility is seen as transitory. That mindset drives how the company approaches food contracts.

“Having been through a couple of these cycles with products specifically, there are some products that are at all-time highs and they will come down,” Roberts said. “Where we have typically been looking to contract for a longer period of time, we’ll not do that as much. We’ll play the market a little more."

“There’s some risks associated with that obviously—more volatility. But we don’t think it’s prudent necessarily to lock in on these prices,” he continued.