It will reduce operational complexity and restructure the company's value proposition, the CEO said.

Inflationary pressure continued in Q3, with impact beyond expectation. Food and beverage costs were 180 basis points higher, driven by commodity inflation of 11 percent.

In response, the company is leveraging a pricing strategy that isn’t passive, but not reckless, either. The brand has already taken six pricing actions this year—all tested beforehand—to ensure consumer acceptance and protect long-term traffic growth. Chili’s exited Q3 with 4.6 percent pricing, while Maggiano’s carried 5.1 percent as it left the quarter. More rises are expected in Q4.

That's only a piece of the puzzle. Roberts said Brinker is also pursuing ways to create efficiencies, including an upcoming menu that will reduce operational complexity, restructure the company’s value proposition, and take more pricing, which should bring Chili’s closer to 6 percent.

In the past, when products like beef or chicken saw inflation, the casual-dining chain leveraged its diverse menu to maneuver those specific cost issues. However, as Roberts explained, it’s more difficult to avoid inflation when everything is going up at the same time.

“[The menu] has been in test,” the CEO said during Chili’s Q3 earnings call. “We feel good about the way we’ve restructured our platforms to deliver better margins, but also to deliver us more pricing flexibility across geographies and across various menu items, especially as we’re starting to see commodity prices significantly different in various categories. We anticipate we’ll see more of that going forward—more of the typical, 'this is the product that’s going to be the most challenged. How do we move the mix around that and get our guest to shop a little bit differently at a more favorable cost area of the menu?'”

The biggest drivers of commodity inflation are proteins, but the impact is now broader. For instance, while wings have usually been the main source of volatility when it comes to chicken, Roberts said those pressures have seeped into breast meat, a historically stable product.

Brinker believes commodity prices will moderate, but not until the start of 2023, which would be the back half of the company’s fiscal calendar (July through June).

“When we look at the commodities environment, and you just do some of the math on the costs that are going into the input side of this, it doesn’t really add up to these prices, so there’s got to be inefficiencies as we all know in the distribution and the supply chain side that are being taken into consideration that are taking these prices higher than they would normally go up and frankly, there’s some opportunistic pricing going on,” Roberts said. 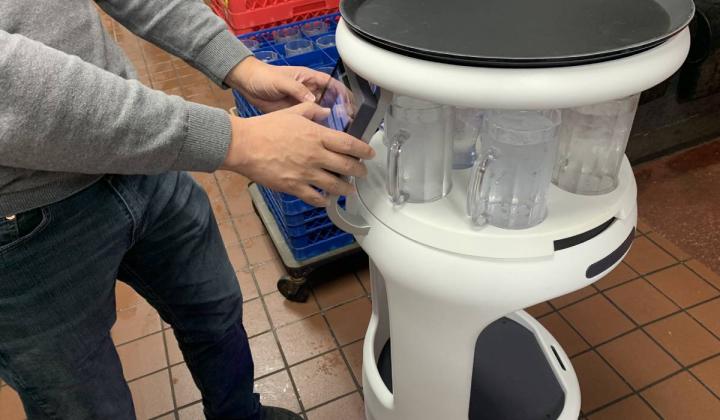 Chili's is testing Rita the Robot to relieve labor pressure in the front of house.

At Chili’s, off-premises remains more than 200 percent above pre-pandemic comparisons, as the delivery business continues to grow. Dining rooms are at 80 percent of pre-COVID levels, a figure that was weighed down by the outsized impact of Omicron in January.

Roberts said in-restaurant customers—which pay $8 more in average check than off-premises guests—are being motivated from two sources. The first is organic desire; consumers see COVID relenting and feel safer dining out. Secondly, customers are being nudged along by Chili’s via throughput initiatives that create a better experience.

The chain is continuing to roll out its Team Service Evolution model in which servers use handheld tablets to take orders instead of running back and forth to a POS station. For guests, this means more face time with servers. Under this system, front-of-house labor hours are near record lows and servers are making more than they ever had, Roberts said, which should cut turnover and relieve pressure on the P&L.

Chili’s is also extending its test of Rita the Robot, a machine that can serve, buss, host, and sing birthday songs. This month, the robot will be placed in 51 more restaurants across the country, and Wade Allen, Brinker International’s SVP of innovation, believes a systemwide rollout could happen within the next five years.

After resolving front-of-house labor woes, Chili’s will focus on optimizing the kitchen for the first time in close to 10 years.

“We’re testing some exciting new equipment that makes our heart of the house team members’ jobs easier, delivers a better product, is more efficient, and more effectively supports high volumes,” Roberts said. “We’re moving quickly down that path. More on that to come.”

Unlike commodities, labor pressures seem to be stabilizing now that Chili’s is above pre-pandemic staffing levels. The downside, however, is that many are new employees in need of training. In Q3, labor was unfavorable by 100 basis points compared to 2021, driven by wage inflation of 10 percent and high training and overtime costs.

“We’re just in that curve of training everybody up, getting all the leadership to understand the [new service model] right now and get comfortable with it,” Roberts said.

In terms of future store development, Chili’s plans to open, on average, two to three restaurants per month during fiscal 2023. A recently debuted unit outside of San Antonio earned more than $100,000 in sales during its first week. The company is expanding its virtual brand business, It’s Just Wings and Maggiano’s Italian Classics, on two fronts—building delivery in existing markets with more third-party partners, and placing ghost kitchens and smaller Chili’s brick-and-mortar stores in previously untapped markets.

Brinker’s sales in the third quarter increased to $960.6 million as compared to $813.7 million last year. Restaurant operating margin lowered to 12.2 percent, versus 13.9 percent in 2021.