North Carolina-based East Coast Wings + Grill has its sights on 100 units. Can it get there? Don't bet against CEO Sam Ballas.
October 2017 Danny Klein

At first glance, the growth plan laid out by East Coast Wings + Grill might seem bold, perhaps even ambitious: Take a 35-unit chicken-wing chain and build it beyond 100 restaurants. Given the full-service casual dining landscape, where retraction—not expansion—is the buzzword, East Coast Wings would be a trend bucker to say the least. This is true without even mentioning chicken wings themselves, which have soared to historic prices in recent months, afflicting even the biggest and most shadow-casting brands in foodservice. Case in point, Buffalo Wild Wings.

Yet, the reality about East Coast Wings is this: Anything CEO Sam Ballas says is researched and contemplated down to the grain. This is not a brand that believes in “ballpark” figures.

When it comes to the true health of a chain system—its unit-level economics—Ballas says East Coast Wings has a patent on the term. “We own that phrase,” he says. “You can’t say it unless you pay me a royalty.”

Driven by unit-level economics is beyond a mantra for East Coast Wings. It’s the ironclad benchmark and predicative model by which the brand measures, sustains, and speaks about its future. For some time, the North Carolina-based company didn’t widely share its success. Part of that was the company’s rolling initiatives and the time it would take to see them mature. Another was East Coast’s decision to fly under the radar and let its franchisees build from within. But the last reason is simply because East Coast Wings is finally ready to tell its story, and it’s a compelling one, no doubt.

Over the first half of 2017, the franchise has enjoyed same-store sales growth of 18.5 percent. As unheard of as that may be, its guest count boost of 13 percent is equally eye opening. There are more than 60 locations operating or in various stages of development, with 12 stores expected to open by year-end of 2018. Markets include Florida, Georgia, Kentucky, North Carolina, Pennsylvania, South Carolina, Tennessee, and Virginia.

Ballas says he often gets this question: What’s differentiating the brand right now amid a crumbling backdrop? It’s not a direct, easy-to-hand out answer, but it is anchored by two terms: EBITDA and, yes, unit-level economics. 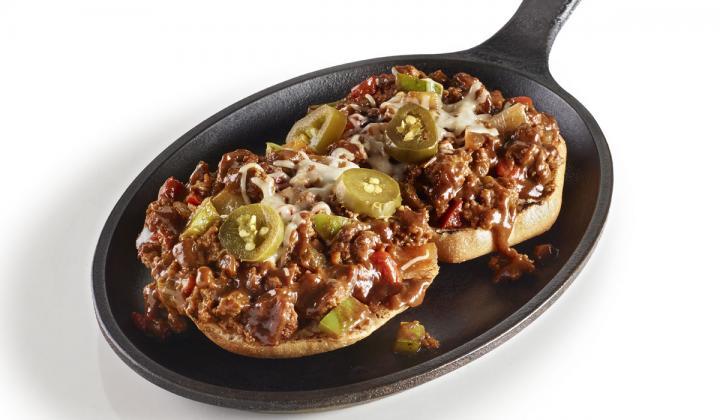 East Coast's just released a new fall menu. The brand's from-scratch kitchen has always been a hit with diners.

To start explaining this progress, it’s best to detail the brand’s model, how it’s evolved, and what it will look like in the future. Back in 2013, East Coast introduced a university design and a quick-service prototype. The idea, as it often is, was to create real-estate agility, lower startup and franchise costs, and capitalize on a convenience-driven market that continues to gobble up share.

But unlike many competitors, Ballas hit the brakes before the bubble burst. There are only two limited-service units, both in North Carolina. That’s it. No more will be built.

“We thought that the juice wasn’t worth the squeeze for that style of marketplace,” Ballas says.

East Coast bailed on the quick-service track for a variety of factors. Guests who walked into one, whether they understood the location’s purpose or they were following the brand from a previous trip, left disappointed. “You walk into the brand wanting things that aren’t there because it’s a more limited menu. We had a lot of kickback with that from patrons,” Ballas says.

That limited menu revolving around chicken wings was also a risky equation. It was a cautionary tale Ballas watched unfold during the recession years. He saw it again as wing prices soared. “If that’s all you sell then there is a pretty good chance that you will be in trouble,” he says. “You will have a depletion of sales or EBITDA, or profitability. … If you were a 10 percent EBITDA product and your wing prices jumped 30 percent, 40 percent, there went your profit. How long could you stay in business with that happening?”

Those stores, which are both still functioning and doing OK, aren’t generating nearly close to the average unit volumes or EBITDA of the full-service locations, naturally. Ballas says the beta testing of those restaurants just didn’t balance out.

“We went to the beta test and educated the brand and ourselves as an executive team, and realized, ‘You know what, we’re damn good at what we do, so let’s just keep doing it that way and start our growth model for full service the way we anticipated we’re going to do it. And that’s what we’re doing.”

However, that’s not to say East Coast Wings is growing without changing. This time, though, the brand is riding the success of what it calls East Coast Wings + Grill 2.0—a design and operating model that is more of an evolution, not a shift from its bread-and-butter system.

"Our numbers this year are a combination of the ability of the brand to utilize strategic platforms and technology combined with the DNA of quality food and the best franchisees in my space." — Sam Ballas, East Coast Wings + Grill CEO. 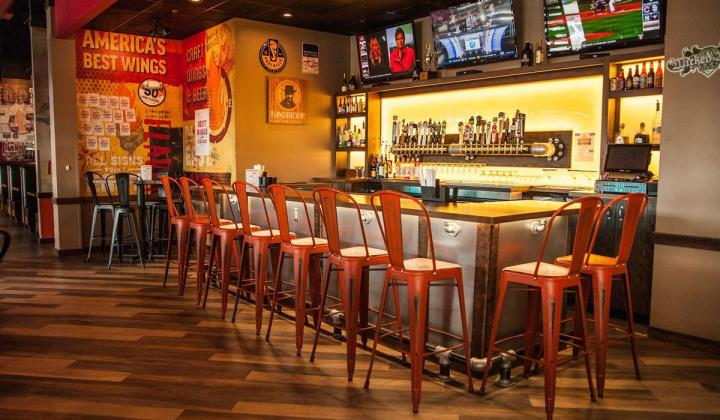 East Coast's 2.0 model might be smaller, but its performance is still on par with the larger stores.

Unlike the quick-service iteration, the 2.0 version has blown the doors off sales wise. The first opened in December 2016 and there are now units in Harrisburg and Burlington, North Carolina. The Harrisburg store, which has operated a full calendar year, has been able to sustain, if not grow, East Coast Wings’ sales in a box 1,000 square feet smaller.

“Think about that win for a location that can develop cheaper, operate with less expense, modeling, but yet have the same revenue sustainment that in itself drives larger EBITDA, right?” Ballas says.

Aside from size, the 2.0 design has a reworked interior and exterior for cost effective development. It’s rustic and industrial with a smaller footprint that reduces development costs by about 20 percent.

And there’s more to this shift than the physical. East Coast Wings has been a technological innovator for years, especially in the loyalty space. The chain launched its program in 2011—far earlier than many casual dining companies. The goal was to not only encourage repeat visits, but to build its customer database, boost check average, and get to know the brand’s diners.

About four years ago, East Coast turned the mirror around. The company sought a partner and looked for a direct way to reach its base.

“How do I get you away from the very bland, traditional, fill-in-the-blank comment cards, and be a little bit innovative in technology?” Ballas says. “Our solution was we would attach that platform to a loyalty program. I will tell you if you go back and look four or five years ago, casual dining was not talking loyalty programing when we were. We were ahead of the curve, as small as we are, with our customer-based loyalty program”

East Coast also decided it didn’t want its mobile and online ordering to be a borrowed, “black-label platform.” In other terms, East Coast wanted a system that it owned. The issue there, and a reason many brands take the other route, is that it comes with a hefty cost.

East Coast linked up with Paytronix for its loyalty program, Buxton for data analysis, and Olo for online ordering. All names often associated with the biggest punchers on the market. The chain is also partnering with FreedomPay for pay-at-the-table, ensuring secure transactions and decreased liability for partners.

“[These were platforms] that most franchise systems, or any chain system, casual dining at our level couldn’t afford to even use. So we implemented a lot of strategy early in 2016 because last year was the first year in the history of the brand that we felt a little tightness. And we had a couple of months in some negative same-store sales,” Ballas says.

East Coast needed to foot the bill to flip the results.

“We implemented all these different levels of platforms into a marketing and growth strategy. The beginning part was the conversation. By the middle of Q3 2016 we were implementing the strategy, which showed us the fruit results by end of June this year,” Ballas says.

Thanks to the loyalty program and “some strategic movement,” mobile and online ordering is producing a ticket average nearly 42 percent higher.

“That’s a huge number,” Ballas says. “We saw that strategy early. But here’s the key: The key is that when you have a sound financial model as a corporate structure, especially a franchise model, and you see opportunity strategically to find growth revenue dollars, and you have the capitalization be able to make that distinctive move, you need to make it fast. Our numbers this year are a combination of the ability of the brand to utilize strategic platforms and technology combined with the DNA of quality food and the best franchisees in my space.”

Outside of the technology, East Coast is adjusting menu offerings to appease market trends and add cost value engineering into offerings. This began in 2016 with a fall menu and will conclude with a 2018 spring menu, the brand says. There are also more than 65 craft-style beer options available. The most recent fall menu was released in late October and offers 15 new items ranging from entrée skillets to desserts. Some highlights include: Lobster Mac n Cheese Skillet, Ahi Tuna Crisps, and Macadamia Nut Cookie Skillet.

East Coast, which also has a new logo, hired Mark Lyso as its new executive vice president of operations in June. Lyso served as executive director of Franchise Development at Sizzler, director of recruiting with Famous Dave’s of America, and chief operating officer with Ruby’s Franchise Systems, in the past. “He’s like a kid in the candy store with all the platforms we have accessible for our team to be able to support the unit level, and everything we do at corporate is to support the unit-by-unit operation on the ground and improve the experience for our diners,” Ballas says.

One reason Ballas believes East Coast can fulfill its growth plan is because of its franchisees. Ballas believes in the system so much he’s going to do something he says is “completely unheard of in the franchise model.” He is working on a plan to place leading franchisees on the ground with the opening team for new stores.

“Franchisees don’t typically volunteer a week of their time to go with a three, four, five-person corporate team and go fly to Memphis, for example, and go open a East Coast Wings + Grill,” Ballas says. “But we have franchisees who believe that the integrity of the units have to be in tact immediately to the point where they want to be vested in the process. … Some people would say, ‘Why do you want to give away your cool tools to all the other franchisees?’ Well, they don’t have the same franchisees I have. You might give away the farm but can they make the field grow corn?”