CEO: Dave & Buster's is Back and Stronger than Ever

The eatertainment chain just posted record results across the board.

Dave & Buster’s CEO Brian Jenkins wasn’t underselling it Thursday when he said the brand had “come a very long way in just over a year.” Among the industry’s publicly traded chains, few dropped as deep into the pandemic hole as Dave & Buster’s. Comparable sales plunged 87 percent out of the gate as the 143-unit brand laid off more than 1,300 people and cautioned a bankruptcy could be near if a deal wasn’t struck with lenders.

But Jenkins always kept the long-game in sight. “We have had a single goal to emerge as a stronger, more competitive company,” he said.

As disruptive and pressing as COVID-19 was, it offered a “great reset” chance for some restaurants to pause, take stock, and adjust for a changing customer. And Dave & Buster’s didn’t squander the silver lining.

The chain also grew its EBITDA performance in Q2 by the $100 million mark for the first time in any quarter in Dave & Buster’s 40-year history, achieving $114 million in EBITDA, $36 million (44 percent) higher on a two-year view.

“Our brand is back and we are stronger than ever,” Jenkins said.

The key for Dave & Buster’s in this journey was always capacity. Unlike non-eatertainment peers, Dave & Buster’s couldn’t offset dine-in losses with off-premises efforts. A business built on social interaction and amusement revenue (67 percent of total sales this past quarter) wasn’t going to pivot around the fact people were trying to avoid one another.

Dave & Buster’s ended Q2 with every store open. Also, the chain was plenty busy while it waited to get going again. The best way to illustrate this is where Dave & Buster’s recovery is unfolding. Friday and Saturday nights have still not come back to pre-COVID levels. And yet, the brand is beating 2019 numbers. 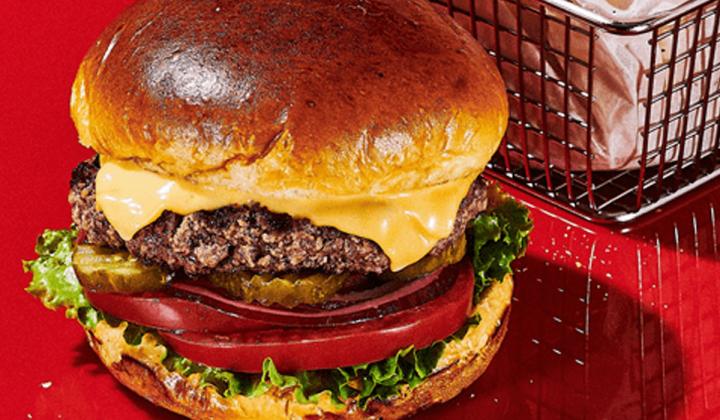 Over the past nine months, Dave & Buster’s worked on a new menu, game, and service model alongside a focus on streamlining execution, all in an effort to broaden reach and inspire visitation throughout the week. Dave & Buster’s cut food offerings by 33 percent and pushed a fresh identity, “Inspired American Kitchen,” to the center. Since rolling in May, COO Margo Manning said, half of the chain’s top-10 best sellers are either new or refreshed options. Additionally, Dave & Buster’s completed a beverage analysis and is on the cusp of evolving its lineup, with a launch date set for Q4 “to improve relevance and attachment in order to drive beverage sales,” Manning said.

The company’s entertainment initiative, though, is really where the frequency conversation is evolving (back in 2019, the company said its average guest visits less than twice a year). This past period, Dave & Buster’s piloted multiple programming initiatives. It hosted themed trivia nights and is continuing to do so, like Harry Potter and The Office, powered by Geeks Who Drink. Guests sign up for $5 per player. There was a Marvel Universe Quiz Show on August 10.

“These events are easy to execute and are also easy to market to our guests,” Manning said. “We intend to rapidly expand these test to more market this fall, based on its early success.”

Dave & Buster’s plans to introduce additional enteratainment formats this fall, comprised of music, film content, and live interaction. For football season, the chain will aim to amplify the watching experience—and get people off the couch—with custom video content and proprietary video elements, as well as added integration with Dave & Buster’s live radio format.

In key markets, the chain will also introduce live hosts to boost select football games. Picture performers engaging with guests before, during, and after contests with activities and prize giveaways.

“Our intention is to use this program model throughout the year and expand it further in 2022 as we continue to look for ways to get the guests more reasons to come visit D&B,” Manning said.

Here’s an example of the programming in action: Dave & Buster’s on Thursday announced a partnership with Barstool Sports’ Pardon My Take for a “football-viewing extravaganza.”

Additionally, Jenkins said the chain continues to explore a sports-betting partnership, which he believes would “represent a meaningfully enhancement to our appeal as a sports watching destination.”

“We're working on that. We're in active discussions, and when we finalize that agreement, we'll have more to share,” he said.

On the operations side, Dave & Buster’s has worked to strip friction out of its business for some time. It’s become imperative of late given staffing levels remain well below 2019 levels, despite the brand offering pay incentives in Q2, and will likely remain that way near-term or longer given the sector’s overall challenges. Restaurants lost 41,500 jobs in August, marking the first time they’ve experienced negative growth since January. After losing 19,400 workers to begin 2021, food and drink places gained roughly 1.03 million jobs across six months before the reversal in August. There were 11.3 million on payroll during the month, which is still 1 million shy of February 2020.

“The labor market continues to be challenging,” Manning said. “In Q2, we made a temporary investment in hiring programs and retention incentives and we gained significant staffing tractions, which bolstered our staffing levels for what was a very busy summer. Q3 will bring a seasonal drop that combined with our new technology tools will put less pressure on staffing. This will give us time to lift our sights to the holiday season.”

Speaking to the tech tools, Dave & Buster’s unveiled a mobile web-enabled platform systemwide, and the majority of guests are now using the option, Jenkins said. This service model combines tablets and the mobile web platform to enable a contactless order pay experience. Due to encouraging adoption, Dave & Buster’s is furthering a test of a completely self-serve, mobile-web enabled guest experience in two of its stores. The tablets allowed Dave & Buster’s to expand server sections as well.

The brand recently completed its first campaign under new direction, which ran from mid-June to early July. It employed what Coleman called a “window-based media approach” that concentrates dollars into periods where Dave & Buster’s is most relevant.

“This change in strategy provides focus and depth in our marketing communication and prioritize incremental visitation over general brand awareness,” Coleman said.

Dave & Buster’s changed media mix during the campaign by shifting the majority of spend to digital. Coleman said this enabled the company to be more surgical with audience targeting while maintaining high levels of video impressions as a percentage of total media.

The important thing to note, however, is Dave & Buster’s promoted emotional brand connection over discount-driven value messaging in hopes of driving visitation.

In Q3 and Q4, Dave & Buster’s will focus on two media windows—fall football and its winter brand campaign. The first will support selected stores that over-index for sports watching. The winter program will feature a more diverse array of activations across channels.

The campaign also has a data collection component to drive enrollment to Dave & Buster’s new loyalty program, which in of itself, is a significant update. The chain has tried several iterations of rewards in recent periods. The new platform, launching in Q4, will incentivize guests for games played, similar to how airline programs reward the amount of travel.

It will introduce challenges where guests complete activities and earn digital and physical rewards. And it will be linked to Dave & Buster’s app. “It's intended to drive frequency and spend,” Coleman said. “The points for games played incentivized guests to do what they love to do at Dave & Buster's which is playing games. So that can be achieved through more visitation or increased spend per visit.”

There are three levels. As users progress from player to icon to legend they’ll received awards at each step. Dave & Buster’s will pulse micro rewards in between based on behaviors and activities, everything from digital badges to free appetizers to bonus play shifts. Dave & Buster’s has seen about an 8 percent cost on that as a percentage of total loyalty spend, Coleman said.

As this all stirs, Dave & Buster’s is getting back to growth as well. The brand plans to open four units in 2021 and six to eight next year. This includes further exploration of a smaller, 18,000-square-foot model. A recent freestanding one (the first) opened in Gainesville, Florida, and generated nearly $6 million in revenue during the first half of the year