Chili's company-run stores with dine-in service were down 3.8 percent in July.

When recalling the onset of the COVID pandemic in March, many operators emphasize how quickly their team pivoted operations.

Wyman Roberts, CEO of Chili’s parent Brinker International, said that wasn’t quite as important for his brand. Instead, Chili’s and Maggiano’s operators stayed true to strategies they’ve been working toward for more than two years—off-premises, digital, value, and scale.

So there was no need to scramble. Roberts said the company walked into the pandemic with seven solid quarters of performance. The key was to stay focused and push on the accelerator.

Roberts noted there aren’t any outstanding characteristics about the positive units in terms of geography or otherwise. The locations are broad based, which is a good sign for Brinker. According to the CEO, Chili's landed the top spot in sales and traffic for three straight months.

“I don’t think anyone would say this is a robust environment for casual dining, and the fact that we have 36 percent of our restaurants running positive comp sales tells me we’re doing some good things and that there is upside potential,” Roberts said during Brinker’s Q4 earnings call. “ … We’re optimistic that there is quite a bit of topside room for our brands to grow and to leverage the capacity we have with some virtual brands as well as just getting the core business stronger.”

At the end of July, 885 Chili’s and 52 Maggiano’s owned by the company had dining rooms open or outside seating available, which accounts for 84 percent of the company footprint. In July, company-run Chili’s units with dine-in service saw comps lower 3.8 percent, while off-premises-only stores slid 46.3 percent. Overall, corporate Chili's locations decreased 10.9 percent in July. That’s an improvement from a 51 percent plunge in April and a 13 percent fall in June.

Roberts said the sales improvement has been with 50 percent capacity limits and without a focus on outdoor patio seating. True to his word in April, no one is getting more out of a half dining room than Chili's.

“The results you’re seeing us deliver, which are top in the category, are without us having to do a whole lot of external or extraneous work in having to build patios or tents in any major way,” Roberts said. “We’re doing that based off the capacity we have in our dining rooms today. … We have a lot of upside as we get more and more comfortable with being able to seat people in maybe closer proximities.”

Subsequent sales increases have certainly been aided by the return of dining rooms, but also the growth of off-premises, which has managed to stick. Pre-pandemic, off-premises mixed in the low teens, and five months later, the channel is still hovering around 50 percent.

An important driver of off-premises has been It’s Just Wings, a delivery-only concept launched at the end of June. The brand was rolled out in 1,050 Chili’s and Maggiano’s restaurants overnight. The company expects it to become a $150 million business.

Roberts estimated that it is totaling more than $3 million per week in sales—a highly incremental boost. That equates to comps growth in the low-single to mid-single digits. The CEO said It’s Just Wings brings impressive margins because of little to no capital investment and the company’s leverage of scale and in-house expertise. 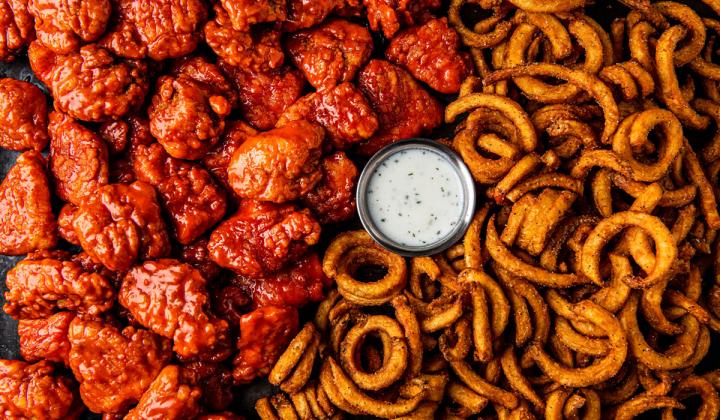 It's Just Wings is bringing in more than $3 million in weekly incremental sales.

The concept was tested in seven Dallas stores for about two months. Roberts said Brinker was encouraged enough by consumer acceptance and operational ability that they launched it in more than 1,000 units in one day.

“It’s proven out to be exactly what we thought it would do, and then some,” Roberts said. “I’m not saying that’s an ideal way to test nationally rolled out concepts, but I would say in the middle of a pandemic that our people were excited about stepping up and not holding back, and we weren’t just looking to cut costs and hunker down. We were looking to grow the business and again prove to ourselves that success for casual dining and bar and grill is to get more capacity into the buildings and the kitchens we already have and not build more of those.”

Roberts indicated that building It’s Just Wings is a priority, but Brinker is also looking to add more virtual brands in the future. The company views this channel as one way to continue building margins, which stood at 6.4 percent for the entire quarter and 12.2 percent in June.

Brinker attributed the improved margins to finding operational efficiencies in areas such as labor, advertising, and repair and maintenance. CFO Joe Taylor said Brinker is identifying millions of dollars worth of opportunity and are set up for additional gains as the company finds more efficiencies, leverages virtual brand sales, and grows dining room capacity.

From a cost structure perspective, Roberts said the pandemic has allowed Brinker to reset the business.

“As we start to build back into the dining room and build the business back up, you have this very unique opportunity to say hey, I mean, I got rid of all these costs because I didn’t have my dining rooms open, so I’m going to build the costs back in,” Roberts said. “Let’s evaluate each of these investments again to make sure that what we’ve been doing for years really does make sense or that maybe somebody that was doing it slightly different in one part of the country, we now have better visibility into it. And while some of these things seem small, when you’ve got over 1,000 restaurants, they add up quickly.”

Chili’s ended Q4 with 1,059 company-owned and 174 franchised stores in the U.S and 377 internationally. Maggiano’s has 52 company stores and one franchise domestically.

In fiscal 2021, Brinker expects comps to be down in the low-to-mid teens.

Roberts said the team was nervous and curious as to how the termination of enhanced unemployment benefits—which expired July 31—would impact business. Two weeks into August, results have gotten better and trends have strengthened.

But the company isn’t going to fool itself into believing that won’t change. Robert said he knows there’s tough economic times ahead for parts of the country, and that’s where Chili’s value proposition and convenience will play a vital role.

“I think we’re in good position to give the consumer what they need as things tighten up a little bit without having to resort to some limited-time offer stuff or slashing prices,” Roberts said. “We have just a great value proposition embedded in our concepts. It’s Just Wings just builds on that.”