More markets and more opportunities away in 2019.
March 2019 Danny Klein

Turn the calendar back a year and Chuy’s off-premises sales were breaking records. At 12.25 percent, the mix was the largest in the chain’s 36-year-history to date. One of the biggest reasons for optimism was catering. Delivery currently represents just under 2 percent of Chuy’s total sales. It’s not a heavy hitter, at least not yet. And like many full-service brands, Chuy’s would rather focus off-premises efforts into take-out, and growing non four-wall occasions it can exercise some control over.

When the shift started to occur, Chuy’s expanded a catering pilot from Nashville, Tennessee, to Dallas and Houston, saying “catering gives us an opportunity to utilize a new avenue of revenue growth, while simultaneously improving awareness of the Chuy’s brand.” The latter point was especially important as Chuy’s geared up for 10 percent unit growth in 2018—a mark it hit with the opening of nine restaurants, bringing the total store count to 100 as of December 30.

Not surprisingly, Chuy’s plans to expand to another six markets beginning in the second quarter of 2019.

The brand has grown its off-premises mix overall, too, setting new company marks. To-go sales rose 15.6 percent in Q4, year-over-year, to reach 14 percent of total business. CEO Steve Hislop said this was achieved without any advertising as well. Chuy’s just completed the rollout of its online ordering system through Olo in Q4 and wants to iron out kinks before real promotion begins. The platform will also be a stepping stone for Chuy’s future loyalty program, Hislop said, set to begin its exploration phase in the back half of 2019.

All of these changes mixed the bag for Chuy’s last year and provided a jolt of optimism for 2019. While it was a challenging 12 months, 2018 was also a year of accomplishments, Hislop said, 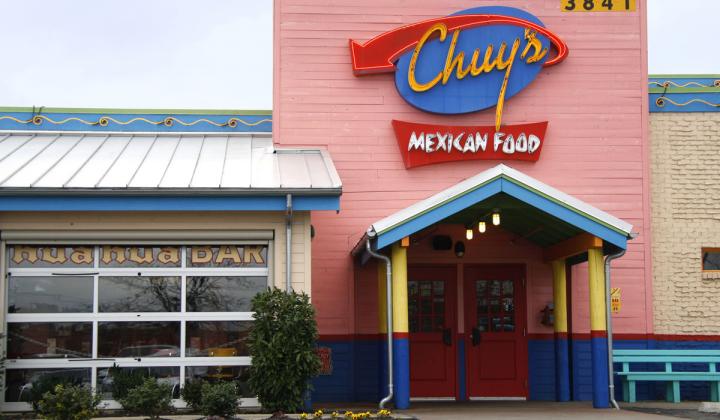 Chuy's is going to slow its growth somewhat in 2019.

Labor, prices, and systems to balance the battle

Labor cost as a percentage of revenue jumped about 80 basis points to 37.2 percent this past quarter for Chuy’s. That sounds pretty familiar for anybody entrenched in the full-service world. Also like many of its peers, Chuy’s found it needed to take price to protect margins and combat industry-wide labor pressures.

In Q4, Chuy’s effective pricing was about 1.5–2 percent. Historically, the chain takes just one price increase per year. But this is a different kind of beast. Chuy’s rolled over that increase in late January and replaced it with an increase of about 2.75–3 percent, which is marginally larger than its typical average.

The price lift stretched pretty much across the board for Chuy’s. It doesn’t have a barbell menu approach, and sits instead in the $8.50–$14 range throughout. The price was taken more in food than alcohol, however, and upped about 20–30 cents on all items.

There’s more to Chuy’s labor initiatives than price. The chain spoke in recent quarters about an upcoming integration of a labor management tool and scheduling module within its POS system. Expected to finish in Q2 of 2019, this will help Chuy’s mitigate ongoing labor pressures by optimizing labor productivity, as well as enhancing sales projections, Hislop said.

In 2018, he added, staffing levels represented a challenging dynamic. As of Q4, though, “we’re better staffed now than we’ve been in the previous two years,” Hislop said.

“That’s really the internal rock that we’ve worked on the hardest,” he added.

Chuy’s can’t achieve the flow-through and operational efficiency it wants if it’s understaff in the front of the house. Over the last three quarters, Chuy’s witnessed turnover rates of roughly 26 percent in management and 105–106 percent on hourly.

A top-of-mind goal for Chuy’s is to improve brand awareness and value messaging as it grows. It tried a digital campaign test in Q4, Hislop said, which returned positive results and define the brand’s 2019 digital marketing strategy. Paid search, paid social, and location-based mobile advertising will remain consistent throughout the first half of 2019, he added.

As a result of a successful media test in Chicago and Washington, D.C., during Q4, Chuy’s continued to focus in these markets for the five weeks leading up to National Margarita Day. Tactics include: promotional radio, posters in public transportation, and advertising on digital platforms like Hulu and Spotify. Moving forward, Q2 campaigns will push brand awareness in Chicago and frequency-driving initiatives in Houston, where Chuy’s appreciates more brand affinity and can home in on traffic instead.

Additionally, Chuy’s said it identified certain test markets where separate and specific local-based plans were more effective. These “out-of-the-box local-store marketing ideas,” and specific day-of-the-week specials are driving transactions, Hislop said. And in response, Chuy’s is increasing its advertising spend about $1.35 million in 2019.

The chain wants to focus on these brand equity opportunities in 2019 over sheer growth. It’s scaling back to five to seven new restaurants and opening only in areas with proven high average-unit volumes.

Chuy’s shut two locations—one in Georgia outside of Atlanta and one in Miami—subsequent to the end of Q4. The closures happened quickly and provided a hard-earned lesson for future development. They opened slow and didn’t show any signs of moving. Both were near malls and one was “one of the lower stores that we’ve ever opened,” Hislop said. Chuy’s went out and partnered with eSite Analytics to make sure it was targeting the right real estate and finding psychographics that fit the profile of an ideal Chuy's customer. Chicago, Miami, Denver, and D.C. are areas Chuy’s expects to grow as awareness builds.

Hislop said Chuy’s would halt growth in new markets until the eSite tool is developed and tested, which will be some time during 2020