Casual Dining Outpaces Industry, but is an Economic Slowdown Coming?

The brands able to absorb or offset rising costs will stand above.
June 2019 Danny Klein

Across the restaurant industry, positive same-store sales growth—although modest—remains a consistent. This past quarter, according to BDO’s benchmarking report The Counter, same-store sales for publicly traded brands hiked 1.5 percent. That’s in line with fiscal 2018’s year-end results, and continues a dynamic that’s played out for some time: A highly competitive and mature market, if not an overly saturated one, and one where restaurants invest in fresh pathways to offset slower dine-in traffic.

Restaurants are enhancing their digital presence, rolling out delivery, promotions, and loyalty to cover the gap. This is also helping mitigate higher labor costs to some degree. Adam Berebitsky, tax partner and leader of BDO’s Restaurant Practice, says the challenge appears likely to persist. “Saturation of restaurants in most markets and low unemployment continue to result in labor inflation, maybe even more so than state minimum wage increases,” he says. “Higher-performing restaurants are maximizing their margins through menu engineering and incremental sales through online ordering and catering, which require either less labor or, in the case of catering, fixed labor.”

“So while labor costs themselves may not be declining, the focus on increasing profitable sales can help mitigate this impact,” Berebitsky adds.

While labor costs rise and exert downward pressure on margins, restaurants should focus on variables they can control, BDO says. Namely, cost of sales and managing inventory. For example, challenging broadline vendors on prices and controlling portion size and waste.

“Restaurants should absolutely be utilizing software that analyzes actual versus theoretical food and beverage costs in order to address potential lost opportunities for better margins and to make informed decisions on how to improve those margins,” the company added.

In Q1, the cost of fresh vegetables rose 19 percent, while the cost of eggs, which were up 54.2 percent at the end of 2018, fell 32.2 percent. Beef increased 2.8 percent. Poultry, cheese, and wheat all posted declines. The cost of power was down 7.8 percent despite the outbreak of African swine fever in China. China’s hog herd may fall 30–40 percent, according to some estimates. BDO says this shouldn’t have a material impact on U.S. pork prices as the USDA predicts U.S. production to rise 5 percent.

Below is a look at where commodities stand. Knowing and anticipating these fluctuations could ease some of the other burdens operators face. 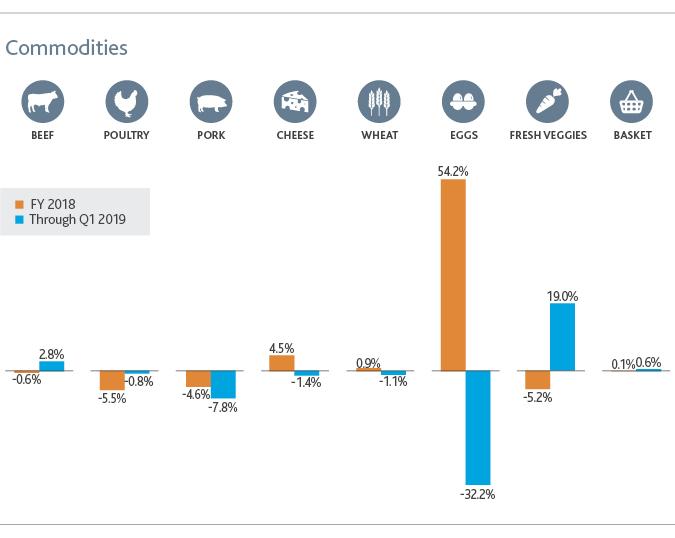 Returning to labor—what BDO calls “the single most pressing issue on restaurants’ minds and margins—the cost of labor rose 0.5 percent in the first three months of 2019. BDO pointed out that statutory minimum wage increases typically go into effect January 1, which challenges the period more than others. Yet this hardly a flash-pan issue. It’s mounted quarter after quarter thanks to wage expansion and climbing turnover rates.

Labor costs came in at 32 percent of net sales in Q1. One suggestion from BDO is to invest in traffic forecasting algorithms to better predict how many employees may be needed throughout the day. While understaffed restaurants often garner the buzz, overstaffing locations is a significant issue, too. Texas Roadhouse spoke about this after its Q1 review.

“We talk about staffing for your next $10,00 a week in sales, but we don’t necessarily need to be staffed for our next $20,000 a week in sales,” president Scott Colosi said. “So we just want to make sure we’ve got a good balance and we’re disciplined, and we believed in the vast majority of our restaurants that’s the case.”

Another recurring theme lately is the move away from limited-time offers and deals designed to drive four-wall traffic. Berebitsky highlighted Olive Garden, which boosted check sizes 4.2 percent despite reducing promotion.

But is this a one-size-fits-all notion?

“As we mention in the report, though, it’s important to note that this won’t be the case for everyone—many are still reliant on LTOs to get customers through their doors,” Berebitsky says.

Olive Garden and Texas Roadhouse increased menu prices by 1.8 and 1.5 percent, respectively, in the quarter. Some chains can do that in this climate. For others, it’s a traffic deterrent they simply can’t afford to tack on.

Operators need to be wary of taking price given the possibility of an economic slowdown, as many have predicted. After growing strongly for nearly a year, the economy seems to have entered a period of uncertainty, created by the escalation of the use of tariffs. Capital investment is being restrained. This could lead to inconsistent consumer-spending growth. Also, wage gains will likely moderate along with job increases at some point.

“While raising prices may be a necessary evil for some brands, value remains a significant driver of customer loyalty,” BDO said.

Put simply, restaurant success will hinge on margins. The brands able to absorb or offset rising costs will be in a better position to compete. 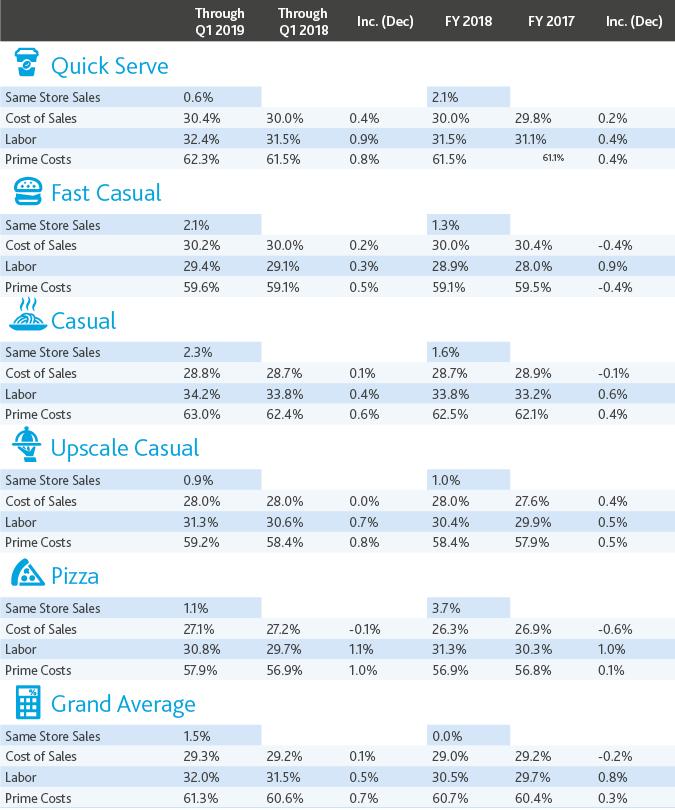 Berebitsky says the casual performance could be related to a more willing customer. “The casual segment outperformed the fast casual segment in terms of same-store sales—this could be because consumers are feeling a little better about the economy and are comfortable spending time and a little more money at pricier concepts,” he says.

But is that sentiment on the verge of changing? Time will tell. If it does, though, brands investing in guest experience, retention, loyalty, and accessibility will have a leg up to weather the storm.