Carrabba’s Evolution is All About Customer Experience

Carrabba’s Italian Grill president Michael Kappitt touched on a universal truth for restaurants. “We have competitors everywhere,” he says. But that’s where the generalizations end. There are four independents for every multi-unit Italian brand in the country. So Carrabba’s is battling for share with competitors it can’t even see. It’s not like the challenge most casual-dining chains face—where look-alike peers and quick-serves jostle for customers. Outside of Fazoli’s and some upstart fast casuals, Italian is not a segment with deep counter-service roots.

The landscape is rather defined and traditional: There are chains, like Carrabba’s, Maggiano’s, and Olive Garden, upscale joints, and neighborhood independents. That’s not counting pizza players.

For 227-unit Carrabba’s, the second-largest brand in Outback parent Bloomin’ Brands’ portfolio, it comes down to owning multiple roles.

“It’s not lost on us when we say we want to be a great neighborhood restaurant that we’re also a chain,” Kappitt says. “You wink and smile when you say it, but it really, sincerely is our aspiration. I think guests understand that.”

“While there are customers who struggle with chain restaurants—it’s not really how they want to spend their money—there’s great benefits,” he adds. “And those benefits are directly related to the experience the guest has.”

There are the obvious chain strengths, like economics of scale from a purchasing perspective. And then there is the evolving corner.

One of the promises of a multi-unit system remains consistency. The notion that customers who trust a brand can count on it in Iowa as much as Florida.

However, the equation is taking on new layers as technology and data play larger roles for restaurants.

There are family recipes on Carrabba’s menu that were featured on opening day in 1986. And the fact that every unit has an owner helps keep that original care and attention to detail going. 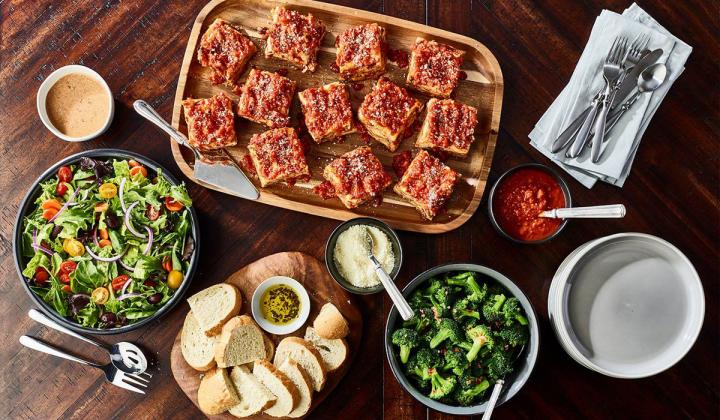 All of those core values, including made-from-scratch cooking and fresh products, are the foundation, Kappitt says. But they’re also, in theory, beliefs shared by every local Italian spot in the country.

Carrabba’s has always pushed the proposition of authentic Italian food at affordable prices. This often resulted, though, in complicated and disruptive LTOs that challenged execution and were difficult—and expensive—to market against.

The ideal hasn’t changed. Carrabba’s is simply attacking the strategy more strategically and from a deeper level than its smaller competitors. It has focused heavily on “healthy traffic,” in recent quarters, moving away from deep discounts to better execution of its core menu. Carrabba’s is targeting more proprietary programs and special occasions and rebuilding its guest base on long-term differentiators, like superior food and service, delivery and other off-premises, family-geared initiatives. Midway through 2018, the chain was down 37 percent in discounting, year-to-date.

Naturally, slicing that kind of promotional-based calendar will dampen traffic a bit. But like all of its brands, including Bonefish and Fleming’s, Bloomin’ believes the end result will be well worth the short-term pain.

This has been a steady grind for Carrabba’s. Back in the first quarter of 2017, the chain shuttered 14 units as same-store sales declined 3.8 percent.

Here’s a look at how the comparable sales picture has evolved:

The proprietary concept is one of the biggest changes, Kappitt says. Carrabba’s has a few regular programs, like Amore Monday (three-course meals starting at $12.99); Founders Favorites Tuesday (original items brought back); Pizza & Wine Wednesday (any wood-fired pizza for $9.99 and $10 off bottles of wine); Date Night Thursday (four-course dinners for $45); and Sangria Sunday (endless glasses for $12.99 with the purchase of an entrée). 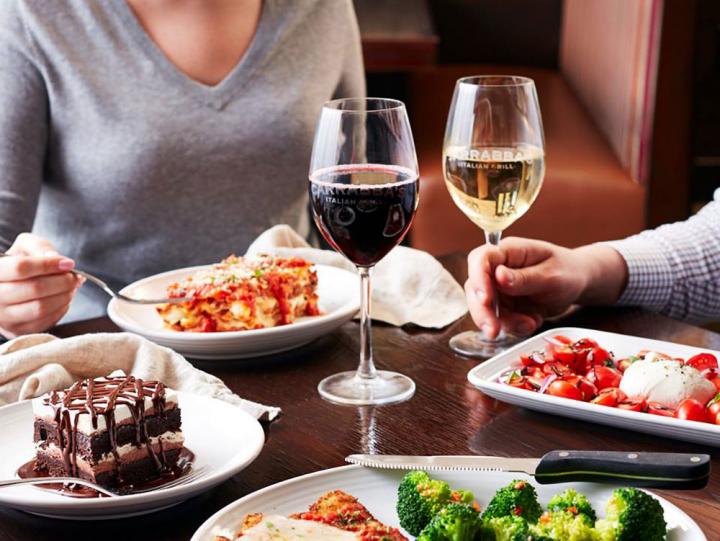 Carrabba's Date NIght Thursday is one of its new promotions.

But the crown jewel, Kappitt says, is Carrabba’s monthly wine dinners held the third Tuesday of every month. The program started on the local level a while back and was then taken national about four years ago. It’s four courses paired with four wines for $50. Kappitt says the response illustrates a key point for Carrabba’s and other sit-down chains nationwide: The definition of value isn’t always tied to price. Often value represents the price you pay for the experience you get.

These themed events produce the highest value for the money ratings in Carrabba’s system, despite being relatively expensive in comparison. “I would argue it’s largely driven by the experience that we’re offering,” Kappitt says.

It’s hard to believe how much the program has changed in four years, he adds. Wine dinners went from random, scattered offerings to a significant part of Carrabba’s business. Internally, the team spends “an incredible amount of time and energy thinking through themes, thinking through food and wine pairing, and really pouring our heart and soul into it,” Kappitt says.

Restaurants know about a month in advance what the menu will be. Managing partners have plenty of time to educate servers and make sure they’re well versed in options—the wine especially—and why everything fits.

It also gives each restaurant’s owner the chance to take center stage for an experiential event once a month. That helps nurture the local feel.

“Among our competitors, we’re all pretty good at delivering food,” Kappitt says. “Certainty we try to be differentiated, but I think the thing that will really drive the difference in success going forward is the experience that we offer. We hear that loud and clear from guests.”

Returning to the scale benefit, Bloomin’ Brands’ Dine Rewards program has more than 8.5 million members. The company has made a habit of cross-fertilizing offers to spread frequency among brands. Instead of splitting them apart, Bloomin’ tries to get an Outback guest to Fleming’s, a Bonefish one to Carrabba’s, and so on.

Past the incentives, though, 8.5 million guest profiles is a rather rich database for a 227-unit chain to pull from. What it does, Kappitt says, is give Carrabba’s the opportunity to send the right people the right message at the right time. That sound simples, but it’s really a pretty recent phenomenon for restaurants. And it’s a journey that’s just beginning for Carrabba’s.

“We’re still learning the power of this data that we have,” Kappitt says. “I would argue that even among the four concepts that we’re a part of, we’re probably leading the way in terms of giving guests more than just their 50 percent off visit deal when they’ve visited us four times. We’re trying to offer them experiences that are exclusive to Dine Rewards members.” 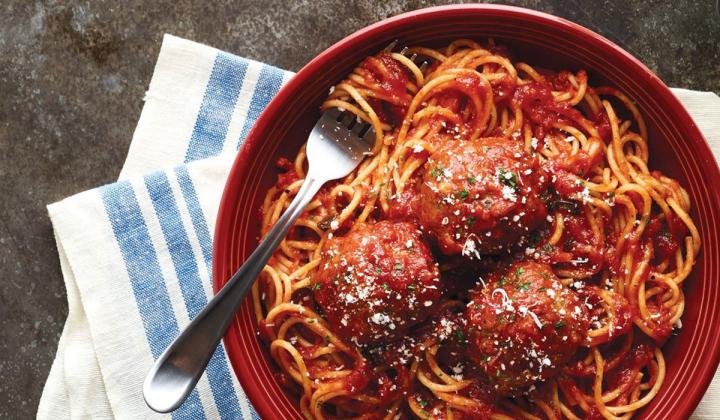 That latter point is where the future of loyalty is headed. Segmentation that creates a VIP club of sorts for rewards members. A program that offers value behind the dollar and point-based system. It courts repeat visits through inclusion and experiences, not one-day barrages.

This isn’t just a healthy traffic driver, either—it’s markedly less expensive on the backend. Outback alone reduced advertising spend by $25 million last year as it turned away from mass marketing. It helped lift check as well, which rose 4 percent in Q1.

One example for Carrabba’s was the March 20 Carnevale Celebration. Rewards members were invited to a special event complete with Venetian masks, Aperol Spritz glasses, and festive food and drinks, like Lamb Lollipops, for $40 a person. Two years ago, there was a Feast of 7 Fishes dinner.

Kappitt says Carrabba’s knows from Dine Rewards how many active users are engaged with the brand. It can listen to customers, too.

And part of Carrabba’s evolution can be credited to following guest preference. The brand learned, for instance, Kappitt says, it was taking away too much from customers in terms of portion size. So it put some back, with 50 percent more chicken in pasta dishes. Two years ago, the chain increased pour sizes of wine. The filet was enhanced. There are bigger shrimps and scallops in dishes now.

Efforts to simplify operations over the past three years allowed these changes to occur seamlessly and cost effectively, Kappitt says.

“We literally just went down the list of the things that were the top pain points for our guests, in terms of portion size, and we’ve been crossing them off pretty methodically as we can afford to,” he says. “And it’s resonating. We see our value ratings going up, our portion size ratings going up. The guest is telling us that we’re spending these dollars in the right places.”

Toward the end of last fiscal year, Carrabba’s finished installing a new kitchen line into restaurants that helped with productivity. Kappitt says it was a “huge” step toward simplifying operations. And it was the first major change to Carrabba’s kitchen since conception. The update reduced waste and saved money in places where Carrabba’s could, as noted before, divert spend to guest-experience improvements, such as portion size. 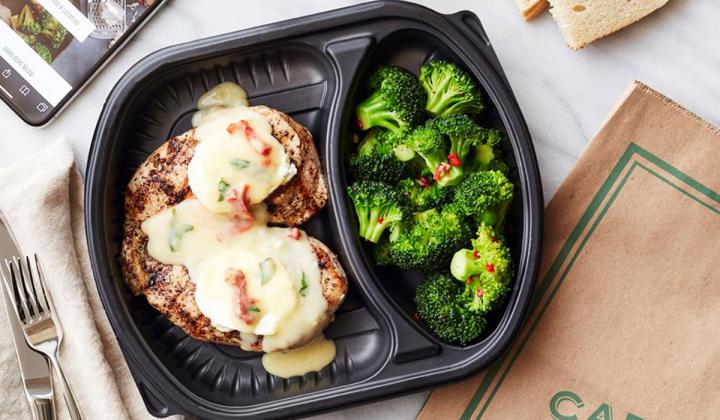 Delivery is currently available in more than 550 locations across Outback and Carrabba’s.

Delivery is currently available in more than 550 locations across Outback and Carrabba’s. Off-premises accounted for 14 percent of total sales at the two brands last quarter.

“In my opinion, delivery and large-party catering is probably one of the biggest growth opportunities for my brand,” Kappitt says.

“When you find areas like this where there’s just a gravitational pull from the consumer, you’ve got to figure out how to leverage that. And I think we’re in a pretty position to do that,” he adds.

Carrabba’s recently launched a promotion Kappitt said fits right into the at-home boom.  The Bring Homemade Home Event, available for a limited time, lets guests dine in and order any regularly price entrée and take home their choice of an entrée, with soup or salad, for just $10. The take-home choice must be of equal or lesser value and it’s not available for filet or ribeye. And the guest must dine-in.

Kappitt says Carrabba’s tested the deal and got good results. This is the first time it’s advertised and spread systemwide. “It reinforces convenience and to-go,” he says. “We think it’s going to be big news in the category.”