What it takes to thrive in one of the full-service restaurant industry's classic segments.
July 2019 Gary M. Stern

A look at the ranking of the top 500 restaurant chains in the U.S. reveals that the country is burger and pizza happy, increasingly dines on tacos and enchiladas, and can’t resist chicken wings. But whatever happened to America’s love of seafood, including shrimp, lobster, and fish at full-service eateries? Of the top 500 eateries, it takes awhile to get to full-dining seafood specialists such as Red Lobster, the 32nd largest restaurant chain, Bonefish Grill at 74 and Legal Seafood at 151.

And revenue at some of these chains has been declining or flat, evidenced by Red Lobster’s figure dipping 1.2 percent in 2018 and Bonefish Grill falling 3.7 percent. Legal Sea Food’s revenue, however, climbed 3.2 percent.

Has seafood gotten too expensive? Are the cheaper tacos, burgers and pizzas more attainable for the family pocketbook when most salaries haven’t been rising despite low unemployment? And what are these seafood chains doing to woo customers back and gain new ones?

Seafood restaurants have struggled more than other casual dining full-service eateries because many of them haven’t seen increases in off-premises and delivery sales, says Bruce Reinstein, a partner of Kinetic 12, a Chicago-based restaurant consulting firm. “Seafood doesn’t travel well for take-out and delivery and that’s hurting their margins,” he says.

Fish fraud sweeps over the industry

How to get diners excited about sustainable seafood

Some other casual-dining chains have driven traffic through discounts, but most seafood chains haven’t taken that route, Reinstein says. While chains boost revenue through liquor sales, seafood restaurants don’t lend themselves to ramping up bar sales.

Although Red Lobster offers consistent food and has a loyal following, Reinstein says, it “has to figure out a way to attract younger consumers. Further, they want it delivered to them. They’re not as inclined to eat out because of the food.” And Bloomin’ Brands’ Bonefish Grill has encountered similar difficulties in regards to attracting millennials and boosting revenue through delivery, he says. 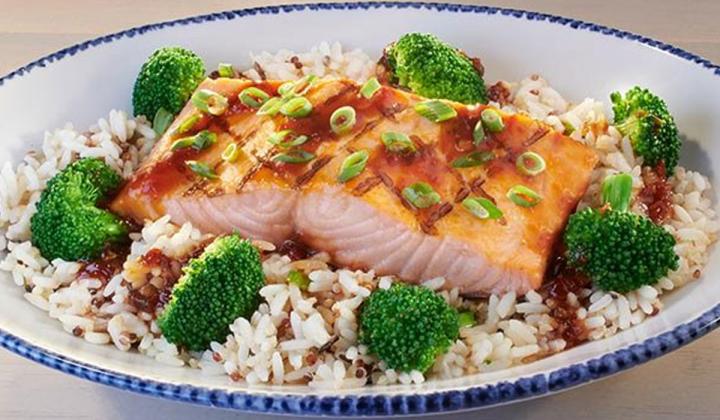 Red Lobster has long courted guests through yearly experiences, where value isn’t solely attached to price. Recently, it brought back its Crabfest with six new combinations, including the Captains' Trio with a fire-grilled sirloin topped with creamy Crab Imperial seafood blend, paired with crab-and-mushroom au gratin and crab-and-seafood linguini Alfredo.

In late May, the brand introduced a Seafood Lover’s Lunch Menu that focuses on affordability and getting guests through the door during what’s typically a challenged sit-down daypart. The offers feature endless soup, salad, and biscuits for $8.99 and a Power Bowls, like the Dragon option with spicy soy-ginger sauce drizzled over quinoa rice and broccoli for $9.99.

And Red Lobster is one seafood chain courting the delivery boom with a third-party partner.

Bonefish, which reported same-store sales gains of 1.9 percent in the first quarter, was able to build its check through differentiated offerings, such as the ocean mixed grill and three-course lobster dinner promotion, CFO Chris Meyer said during the company’s April review.

In Q4 of 2018, it made an operational change to reduce the number of gift cards sold through discount channels. Meyer said some of the outlets charge higher fees. So it made financial sense to reduce the brand’s reliance on them. The move snipped traffic by about 150 basis points in Q1 but did boost profitability and margins, he said.

Legal Sea Foods, Reinstein says, has done a more effective job of altering and paring down its menu and highlighting appetizers as a way to eat out without over-spending. Each Legal Sea Foods location has its own unique décor, which many millennials prefer more than the traditional chain look.

He also says there are fewer seafood eateries in the top 500 U.S. restaurant chains because seafood costs are more volatile than beef or chicken prices, and that the shelf life of seafood before it spoils is more temporal than other foods.

Despite that fact that some major seafood chains saw a drop in revenue, Pappadeaux Seafood Kitchen, which has 40 locations mostly in Dallas and Houston and throughout Texas, saw a revenue spike of 4.6 percent in 2018. Christina Pappas, its Houston, Texas-based director of marketing, attributed that rise to “treating our guests like family. We’re a family-owned business. We spend a lot of time choosing the best quality fish and vegetables.” 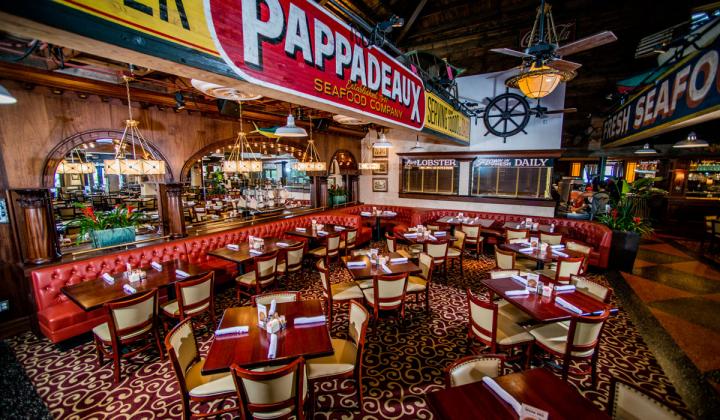 Pappadeaux Seafood Kitchen prides itself on treating each guest the right way and training servers to deliver a more personable experience.

Moreover, she says, Pappadeaux Seafood Kitchen specializes in always looking to innovate its menu and never resting on its laurels. For example, it recently introduced dishes such as American red snapper, octopus, and quail.

Acknowledging that seafood items can be expensive, the brand offers entrees for a range of prices from $19 (prices change due to market conditions) for Costa Rica tilapia to $38 for its red fish.

Pappadeaux also prides itself on treating each guest the right way and training servers to deliver a more personable experience. “We put more dollars into our people, not our marketing budgets,” Pappas says.  All managers are developed from within the restaurants.

While many concepts have gravitated to offering third-party delivery through Uber Eats, Seamless, Grubhub, Doordash, etc., Pappadeaux, so far, has declined that opportunity. “At this point in time, we feel that our food is best coming from us. We’ve chosen not to partner with anyone, but at another point in time, things could change,” she says.

The Pappas family not only owns Pappadeaux Seafood Kitchen, but also runs a series of Pappas-named eateries specializing in steak, burgers, and barbecue. Guests “know what to expect from our brand. They know they’re going to get good food and quality service,” Pappas says.

Seafood, Pappas acknowledges, can be costly and that challenges operations. “You have to give the guest the entire experience including drinks, appetizers, and desserts. It’s a package—that’s what gives us our competitive edge,” she says. 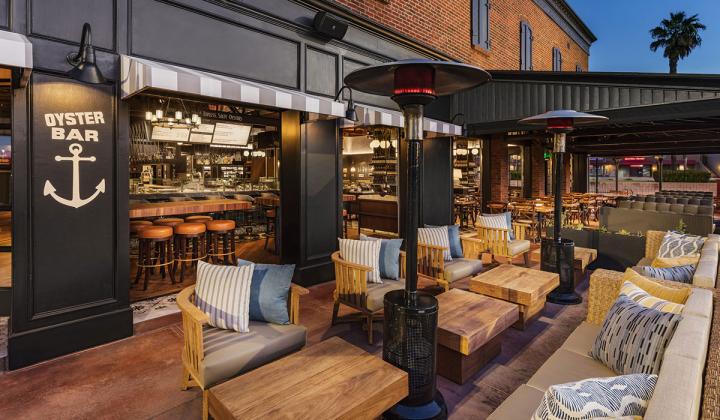 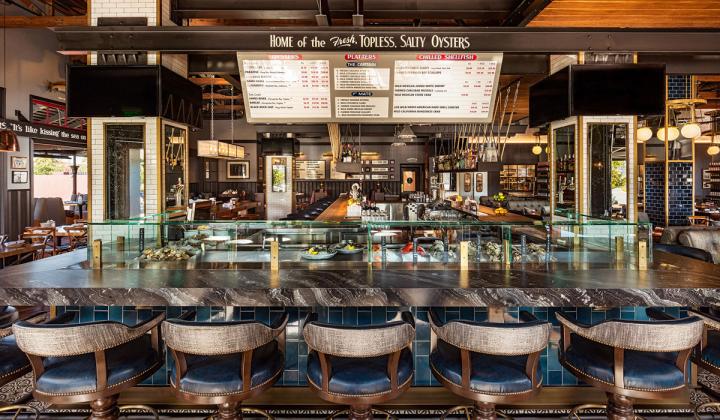 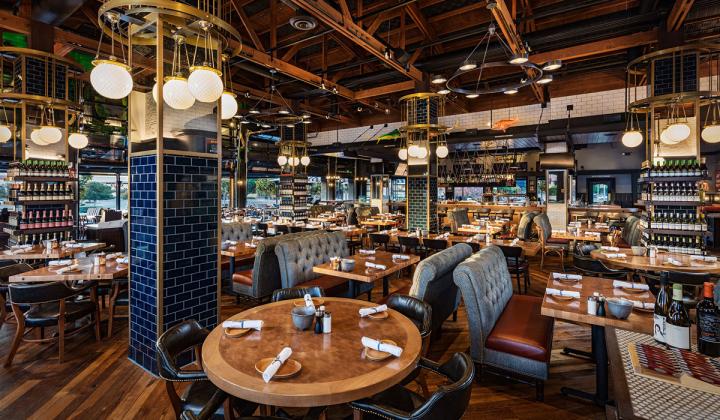 King’s Fish House has remodeled six locations so far, with more to come.

At King’s Fish House, a chain of 11 eateries located mostly in California, “finding ways to improve the guest experience and giving the guests more value for their money” has helped it thrive and combat segment headwinds, says Heath Bumgardner, its vice-president of operations, who is based in Costa Mesa, California. But guests are looking for a litany of factors to determine which seafood restaurant to choose, including “the environment, service, foods, drink, and hospitality,” he says.

Freshness of the seafood also is a constant customer demand, Bumgardner says. King’s Fish House prints its menu twice daily to reflect a new catch of fish such as oysters.

The brand is always looking for new fish to serve, such as Loup de mer, which is prepared as a whole fish, deboned, and charbroiled.

Rather than targeting a specific clientele, King’s Fish House appeals to a wide-ranging audience, including kids who come for the specific children’s menu, which looks like a coloring book, seniors who dine there for the health benefits of seafood, and millennials who often gravitate to sushi.

King’s Fish House owns all of its eateries and has opted not to franchise. “We’re a hospitality-focused restaurant company, and we want to be able to make great decisions for guests, and not hold to someone else’s expectations,” Bumgardner says.

Like many other seafood chains, it doesn’t offer its own or third-party delivery. “Everyone makes their own decisions. It hasn’t been something we wanted to do,” Bumgardner says.

Its parent company, King’s Seafood Company, owns King’s Seafood Distribution, which enables it and other restaurants in its portfolio to receive seafood directly from fisherman of the company’s choice, through its network. For example, Bumgardner will get a call from the distribution center that California seabass, soft-shell crab or Copper River Salmon is available that day.

The brand is also undergoing a remodel program. Six stores have been completed and more are to come.

But consultant Reinstein recommends that seafood chains are going to need to make some adjustments to keep pace with the changing full-service casual-dining environment.

“They’re going to need to find ways to offer delivery in the future to keep boosting their revenue and tapping what customers want,” he says.