Ruby Tuesday has a new owner and CMO to guide its efforts.

Can Ruby Tuesday Stage a Comeback?

The casual-dining icon is forging ahead with a new vision.
August 2019 Gary M. Stern

Like many casual-dining icons, Ruby Tuesday has faced some hard times of late. In 2018, its revenue dipped nearly 13 percent. In 2016, it shuttered 95 stores alone and in 2018 it closed an additional 50 locations. Similar to many chains, Ruby Tuesday is shrinking its overall footprint and strengthening its top performers. Today, there are 486 locations in 39 states, along with 11 countries and territories from around the globe. As of September 2017, there were 599 stores. Ruby Tuesday had 724 units in May 2016.

Its new owner, NRD Capital Management, an Atlanta-based private equity firm, opted to take it private through a $148 million buy-out in early 2018.

Named after the Rolling Stone song “Ruby Tuesday,” it too may have to “change with every new day” as the lyric goes.

But a reading of some of the Yelp reviews of one Knoxville location of Ruby Tuesday indicates its highs and lows. One reader said, “The quality was higher than expected, and our server was excellent.”

A look back at Ruby Tuesday's original turnaround plan

But another Yelp reviewer complained about the lack of plates provided at the salad bar, waiting 5 to 10 minutes to have them replaced, empty entrees at the salad bar, and general disarray in the restaurant. Another Yelp responder talked about being served cold food, which needed to be returned to the kitchen.

Naturally, a makeover at Ruby Tuesday is needed if it’s going to bounce back from recent setbacks. And that’s why Jenifer Boyd Harmon was hired in June as its new chief marketing officer. A former senior director of advertising for Denny’s, she’s worked with a slew of restaurant brands, including quick-service chains El Pollo Loco and Hardee’s.

Still known for its signature burgers, Ruby Tuesday is now highlighting its Endless Garden Bar, as more Americans count their calories and watch their weight. Promotions include kids under 10 dine free on Tuesday nights, and new cheese and chicken minis to draw in millennials and others who don’t want a full meal.

Larry Reinstein, president of LJR Hospitality, a Dallas-based consultant, and former CEO of Fresh Concepts, says it’s not just Ruby Tuesday that is facing rocky waters but the entire sector. “… You name it, that category had a great run in the 1980s but it doesn’t resonate with today’s consumer [as much],” he says.

The traditional bar and grill that Ruby Tuesday and other likeminded brands exemplify doesn’t provide the specialized dining experience that some contemporary customers want, which has led to recent evolution. Currently, Reinstein says, casual-dining competitors that simply chase value deals will struggle to sustain long-term consumer interest. “You need revolution,” he says, and that entails providing a special experience and food the consumer can’t get anywhere else. Restaurant locations need to be converted “to represent 2019, not the 1980’s,” he says.

Many Ruby Tuesday locations are situated near or in shopping malls and unless they’re A-plus spots that still drive foot traffic, “malls are no longer the draw they once were, though there are some exceptions,” Reinstein says.

When a private-equity company acquires a restaurant chain, the biggest issue, Reinstein says, is “with capital structure investment that people are willing to make with restaurants.” He suggests that each location would have to be transformed so it appeals to current consumers, and that takes an injection of major dollars. With labor costs rising and qualified staff difficult to hire, the whole casual restaurant space is very tough to crack, he says. 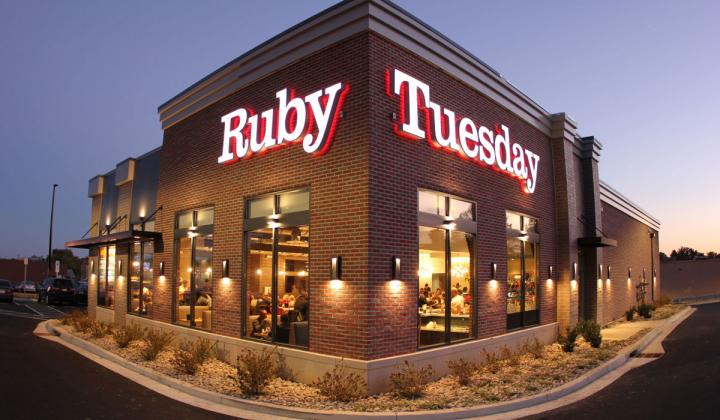 Ruby Tuesday’s target audience is as “an everyday person, salt of the earth, middle-class, comfortable with who they are, and wants to feel like they belong, and wants a fair price for a good meal," says CMO Jenifer Boyd Harmon.

Harmon, the recently hired CMO who is based in Maryville, Tennessee, was candid that Ruby Tuesday, over the last five to seven years, changed its strategy a number of times. That’s not uncommon in this competitive set. Now, however, its strategy focuses on “everyday value, with really delicious food that can set us apart, familiar food with a twist, but not unusual. We give them an excellent experience in a comfortable environment,” she says.

She describes Ruby Tuesday’s target audience as “an everyday person, salt of the earth, middle-class, comfortable with who they are, and wants to feel like they belong, and wants a fair price for a good meal.”

In the coming days, when many children are returning to school and parents will be hard-pressed for time, Ruby Tuesday is launching a new promotion that highlights its value meal of crunchy chicken or burger with fries for $8, and with the unlimited garden salad for $4 extra, at lunch or dinner. “That’s very competitive with fast casual, and competitive with most casual-dining restaurants,” she says.

Knowing that millennials and other customers want their food quickly, Ruby Tuesday introduced third-party delivery through DoorDash and Grubhub.

“You can order your food to go and pick it up on the way home including the garden salad,” Harmon says.

Its new owner, NRD Capital Management, “is aligned with everything we’re working on here with marketing and the executive team,” Harmon adds.

Ruby Tuesday’s goal is to present “very flavorful products they can’t get in other places, consistent service that’s warm and friendly, a place they can linger, with a comfortable environment,” she says.

Ruby Tuesday is inviting the people back who loved it in the past and hoping they’ll return to test out its new menu and salads.

Two years from today, Harmon's goal is to see “same-store comparable sales increase, the very loyal fan base continue to grow, and to know we’re a huge part of the communities we serve.”

Bottom-line, Reinstein says, is “if you take great care of the customer and execute,” a chain could build its base and take market share away from competitors. Even with many retail shops closing, some specialty stores are expanding, not declining, he notes.