More than 130 stores have incorporated delivery through third-party services at Red Robin.

Can Off-Premise Dining Save the Restaurant Industry?

As casual dining chains struggle to maintain market share, many brands are looking to off-premise occasions to cushion against ongoing challenges in the segment. Executives from several large casual dining chains pressed the growing importance of carry-out and delivery orders in recent quarterly earnings calls with investors.

And that’s not surprising, given that all segments are seeing more growth in carry out and delivery sales than for dine-in service, says Victor Fernandez, executive director of insights at TDn2K, which compiles sales data from thousands of restaurants. But the brands that are outperforming their peers in the market tend to see the fastest growth in off-premise dining.

"Given all the trends we've been seeing, I think it is a must for casual dining brands to be able to have a growing off-premise component to their business,” Fernandez says. “However, take-out sales are still a small portion of overall casual dining sales.”

In the segment, take-out and delivery account for only about 10 percent of overall sales, up from about 8 percent two years ago, Fernandez says.

“Casual dining brands need to be successful at making the case to the consumer that they are an option for their take-out needs,” he says, “from the perspective of convenience, speed, quality and portability of the food, and affordability.”

At Brinker’s restaurants, to-go orders represent the fastest growing portion of the business, increasing each of the last five years. Those now account for 10.5 percent of all sales—up from 9 percent five years ago. The company has invested in a new online platform to make off-premise dining more compelling, executives told investors in January. The company, which operates Chili’s Grill & Bar and Maggiano’s Little Italy concepts, foresees the potential for double-digit growth in its off-premise business.

“For takeout guests, we know they want a simpler, faster, effortless experience,” Brinker CEO Wyman Roberts said during an April 26 earnings call, “and we're meeting that need through an upgrade in our Chili's app that provides digital curbside service where our guests can order, pay, and then notify us when they're in the parking lot all through the app. The guest never has to get out of their car. It's in test now and getting great response from guests and we've planned to launch it at the end of this fiscal year.” 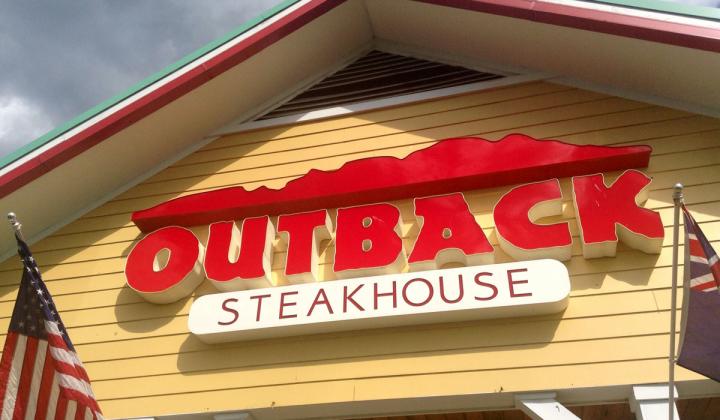 By the end of the fiscal year’s first quarter, 116 Outback Steakhouse and Carrabba’s Italian Grill locations offered some form of delivery.

“I think it's going to be something that we can deliver at scale,” she told investors during the company’s April 26 earnings call, “and that’s going to swing towards the large chains’ advantage as it grows out.”

Bloomin’ continues testing the use of third-party delivery services, while also building out its own in-house delivery network. By the end of the fiscal year’s first quarter, 116 Outback Steakhouse and Carrabba’s Italian Grill locations offered some form of delivery. Executives reported encouraging early results, validating beliefs that demand is strong for consuming restaurant food at home.

While the company likes the control it retains with its own delivery program, it’s not ready to cut off third-party providers.

Smith says average delivery tickets are higher than those for dine-in customers. And the economics of running an in-house delivery service are attractive.

At Red Robin, executives have increasingly targeted off-premise dining, by pushing to-go ordering on television and digital ads and expanding online ordering capabilities through the online ordering platform Olo. In 98 locations, call-in orders are serviced by a centralized call center.

“Given our level of customization on gourmet burgers, we find that most guests still prefer to speak to a human to ensure their unique instructions are captured accurately,” Red Robin CEO Denny Marie Post told investors May 16. “The call center improves answer time—usually by the third ring—and accuracy by sending orders directly into the integrated KDS system via Olo.”

Post says Red Robin continues to slowly expand the reach of the centralized call center approach, adding about 50 restaurants at a time. Now, about 10 percent of all restaurants and a quarter of corporate units offer a curbside pickup option.

Plus, more than 130 stores have incorporated delivery through third-party services, but Post says that has not been a seamless transition: Those delivery orders must be hand transcribed because the technology of the delivery services doesn’t communicate with Red Robin’s POS system. And restaurants have heard of “too many cases” of promised delivery times not being honored by providers. For now, the company is evaluating providers before expanding delivery options.

“So what's the bottom line on the very hot topic of off-premise?” she says. “Well, we are moving smartly on new revenue streams, but it will be the second half of the year, as we've said, before we see a material lift in topline as we begin to actively promote the new offerings, reach new guests, and drive incremental occasions.”