Dave & Buster's has reworked 75 percent of its menu.

Can Food Play a Larger Role at Dave & Buster’s?

The gap with amusements grew this past quarter.
June 2019 Danny Klein

Dave & Buster’s chief executive Brian Jenkins didn’t mince words. In the early part of last year, a significant gap flashed between the eatertainment giant’s amusement business and its food and beverage. The chain installed forceful changes to remedy the issue, slicing its menu 35 percent, improving quality, and replacing or recrafting a whopping 75 percent of its offerings.

But here’s the current plight: Dave & Buster’s is, historically, a low-frequency brand. And most of that frequency comes from the arcade. So driving awareness into these culinary improvement is a steep—and slow moving—challenge.

“Increasing guest awareness of the changes that we have made in food and bev, really improving that attachment rate to amusement, I think it’s going to take some time,” Jenkins said during Tuesday’s first-quarter review.

Dave & Buster’s carried some momentum into the fiscal 2019 calendar, but is off to a choppy start. The 128-unit brand’s shares sank 21.9 percent in trading Wednesday morning after sales missed Wall Street estimates and the company lowered fiscal-year guidance across several key metrics. Dave & Buster’s stock was moving at $41.75 as of 9:44 a.m.—its lowest intraday level in more than a year.

The company’s same-store sales dropped 0.3 percent, year-over-year, stacked on the Q1 2018 result of negative 4.9 percent. Dave & Buster’s has now reported red comps six of the last seven quarters. This after turning to positive territory to close out the year.

Dave & Buster’s credited the volatile quarter and mixed start to Q2 to the net impact of the Easter rollover and April spring breaks. 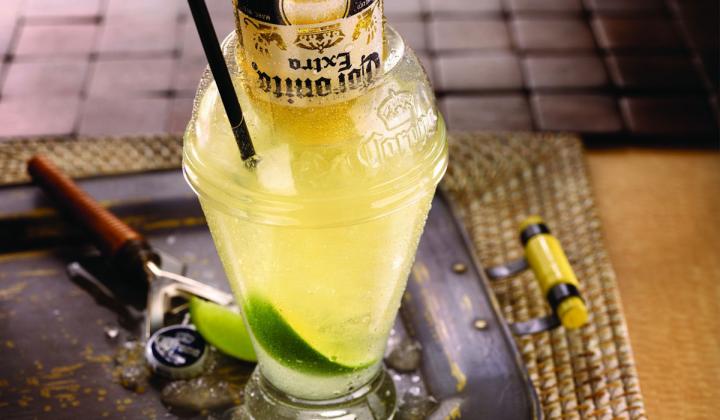 While bridging that amusement and F&B divide, at least to a comp-raising level, will take time (it’s unlikely the roles of amusements and F&B will ever come close to flipping, and Dave & Buster’s doesn’t expect or court that) the chain did see some positive impact from simplification efforts, Jenkins said.

The chain’s guest poll scores for speed of service in the dining room and bar improved over the prior-year period. Food quality scores ticked up. The company also added fresh juices and purées systemwide to enhance its cocktail program, and standardized core recipes and preparation techniques to improve consistency.

How wide is the gap exactly? This past quarter, amusements grew 11.9 percent (in overall sales) and F&B increased 6.1 percent as Dave & Buster’s continues to expand unit count. “Amusements and other” represented 59.2 percent of the chain’s total revenues, an increase of 130 basis points, year-over-year.

But if you break apart the comp figure, walk-in sales fell 0.6 percent. Amusements lifted 1.8 percent. Meanwhile, food fell 2.8 percent and bar declined 0.4 percent. This was much starker than Q4, when amusements upped 4.4 percent and F&B rose 1.1 percent, comprised of 1.3 percent growth on the food side and 0.9 percent in the bar category, respectively.

Dave & Buster’s narrowed the gap last quarter thanks to an All You Can Eat Wings promotion that drove a favorable impact.

This time around, roughly $1 amusement pricing in half of Dave & Buster’s stores sagged traffic, along with a more-muted impact from the wings initiative.

Short-term headwinds and levers will always push the balance one way or the other for Dave & Buster’s. The broader conversation, however, is a larger target. 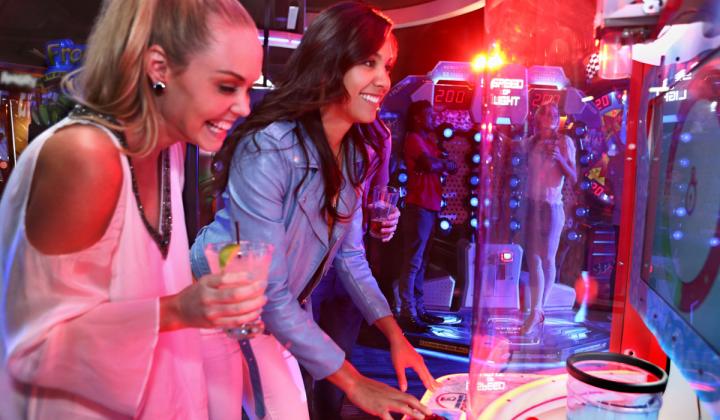 Can Dave & Buster's drive visits with a new mobile app?

One great thing about Dave & Buster’s proprietary virtual reality platform, which just launched its fourth title ahead of the “Men in Black: International” movie, is that it allows the brand to push exclusive offerings in TV ads. “That said, I don’t think that amusements alone can drive the whole bus here,” Jenkins said.

Driving the attachment rate is going to come down to lifting awareness to food and beverage changes, especially since operational setbacks were addressed.

Another reason Dave & Buster’s lowered guidance for 2019 has to do with sheer competition. In about 40 percent of its comp stores, Jenkins said, there is a direct eatertainment challenger or another Dave & Buster’s. He said, “we’re trying to read over two dozen brands out there building some form of combined dining and entertainment space, and we are doing our best to track their indications about stores that they are opening.”

How this entire segment will mature is one of the more intriguing questions in full service. Jenkins said he’s not convinced that all of these upstarts will have sustainability. In the near-term, though, it’s a meaningful headwind Dave & Buster’s expects to increase over the balance of the year “That’s something we don’t see abating for some time,” he said.

READ MORE: Is the restaurant industry headed for the same fate as retail?

Will the eatertainment arena course-correct like much of the industry is? Will it expand, akin to fast casual, then retract once it saturates beyond consumer demand? As many chains with scale have seen, the operationally stellar tend to outlast the trendiest.

“I think what we have to do is focus on what we do best. We have a large nucleus in our stores that are very healthy,” Jenkins said.

“Many of them are small independent players,” he added of the competition. “And candidly, we have significant advantages over them. We have a strong proven business model, which is why I think we see a lot of investment in the space. We have some of the best AUVs, margins and returns in this space. We have scale. We have access to real estate, human capital and we have a great balance sheet as well. So a lot of flexibility to invest in my view, very well positioned for the long-term and I am confident that we are working on the right thing as a brand to sustain the leadership position here.”

Jenkins said Dave & Buster’s is pursuing the right F&B strategy to reinforce this cream-of-the-crop standing. The brand is simply at an inflection where it wants to turn those improving guest metrics into quantitative results.

The company is tinkering with store elements, too. In a Dallas unit, Dave & Buster’s created what it calls “a wide wall,” which is essentially at 15-by-50-foot multi-projector, laser projector screen that brings energy to the space. It’s resulted in a “fairly significant” uptick in food comps, Jenkins said.

Of the company’s highly anticipated fast casual test, also in Dallas, Jenkins said, “initial response has been slower than expected and we are evaluating ways to increase in store awareness.”

“It is a big opportunity and we do not know enough about our guests on the first-party data basis. That’s something that we want to leverage over time and are working on.” — Dave & Buster's CEO Brian Jenkins.

Additionally, Dave & Buster’s marketing has focused heavy on off-peak business in the past, like its Unlimited Wings and Games ($19.99) Thursdays deal—brought back in May. A recent offer, however, where guests could buy or re-charge a $20 Power Card and get $10 in free video game play time, didn’t resonate, Jenkins said.

It’s led Dave & Buster’s to rethink value more broadly to inspire off-peak visits. “We have a lot of capacity and we are going to be more thoughtful and careful about how we lean into discounting and value related things on our peak times,” Jenkins said.

A shift could be coming. Dave & Buster’s new mobile app is expected to launch in the back half of 2019. It’s being redesigned, Jenkins said, to offer greater functionality, convenience, and reduce friction. It streamlines mobile payment and has easy recharge feature. Over time, he hopes it will allow Dave & Buster’s to achieve better guest connect and engagement, and, ultimately, lead to greater frequency and spend.

Importantly, it will create a true account of a first-part data relationship with guests. This goes back to the low-visit frequency dilemma.

“It is a big opportunity and we do not know enough about our guests on the first-party data basis,” Jenkins said. “That’s something that we want to leverage over time and are working on.”

Scott Bowman, who was announced CFO in May, said the app will aid guests in-store, “but it will also provide us wealth of customer data to be able to use that in the future to be more segmented and targeted marketing to our customers to what’s the most relevant to them.”

“And that’s not just promo, that’s also just informational type things of what’s new and so forth,” he added.

Dave & Buster’s remains on the growth path. The company has opened eight stores so far this year, including five in new markets. Six of the units are large boxes. The rest of the year, Jenkins said, will skew toward large-format locations and fresh areas. In total, Dave & Buster’s expects to open 15–16 restaurants in 2019, representing 12 percent net unit growth.

Including stores under construction, the brand has executed commitments for 23 new sites and continues to track toward a long-term opportunity of 230–250 restaurants in the U.S. and Canada. A Middle East partnership was terminated recently due to continued delays.