The iconic deal is back, as other changes take place across the 1,200-unit brand.
July 2019 Danny Klein

Buffalo Wild Wings’ turnaround efforts have chipped away at something chief executive Paul Brown alluded to before the ink dried on Arby’s deal to acquire the 1,200-unit chain. He said this to Business Insider last February, shortly after the $2.9 billion blockbuster: “I think there’s an opportunity to figure out the 21st century incarnation of what made it so successful during, particularly, the early 2000s.”

One of the firestarters for Buffalo Wild Wings’ boom under former CEO Sally Smith, who joined in 1996 where there were fewer than 100 locations, was this notion that nobody had ever really built a nationalized local sports bar. But as the industry spiked in the wake of the Great Recession, when barriers to entry fell and real estate was more affordable, sports bar concepts also sprung up. Did they imitate Buffalo Wild Wings? Of course. That’s simply a side effect of success. However, as Brown admitted, some of these upstarts brought more innovation to the table than Buffalo Wild Wings. And they covered consumer gaps the chain failed to address. Millennials coming to spending age didn’t seek out chains at the same clip previous generations did.

You also have to toss in how sports viewing, especially in public settings, dipped in the face of streaming services, affordable flat screens, and the migration from cable and satellite packages to more curated services. Cash-strapped younger consumers also started cooking more at home, and that included making wings. Smith herself acknowledged this in an old letter to shareholders. She highlighted the rise of convenience among a surging, younger base, and how it challenged Buffalo Wild Wings more than many of its experience-driven counterparts. Counter-service chicken competition skyrocketed along with that preference shift, with brands like Wingstop and Chick-fil-A scaling up and investing heavy in technology.

A look inside the Buffalo Wild Wings of the future

So essentially the issue was this: Buffalo Wild Wings once thrived on its concept differentiation alone. Couple that with scale sports bars couldn’t compete with and Buffalo Wild Wings was a juggernaut with massive whitespace ahead. But stagnating on product offerings, menu innovation, digital pathways, store designs, and message as preference shifted and the market saturated, left Buffalo Wild Wings competing in a category it never intended to be a part of. It grew and defied traffic trends because it wasn’t another casual brand. But did Buffalo Wild Wings do enough to guard that positioning? In recent years, the answer isn’t so clear. 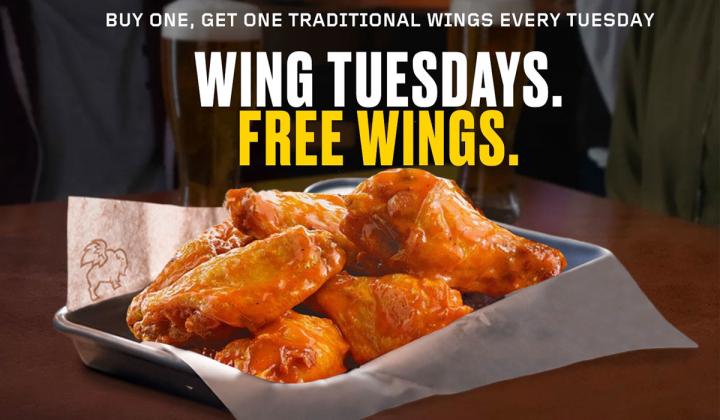 Buffalo Wild Wings is bringing back Wing Tuesdays, one of its most popular promotions ever.

All of these trends and changes aside, however, one challenge—an issue out of Buffalo Wild Wings’ control—really defined its final year as a public company.

In late July 2017, Buffalo Wild Wings killed its famed Half-Price Wings Tuesday deal in favor of a boneless offering. The BOGO boneless promotion, which hit company locations by mid-September, wasn’t related to traffic. In fact, it was one of the company’s major guest count drivers for some time. The death of the deal could be credited to historically high wing prices.

When Buffalo Wild Wings released its 2017 earnings forecast, it cited rising wing prices as a serious threat to its bottom line. The chain was paying an average of $2.16 per pound. A year earlier, Buffalo Wild Wings averaged $1.72.

On top of that, executives said at the time that boneless wings outsold traditional wings at company restaurants in 2016 (Buffalo Wild Wings sold 1.2 billion boneless wings and 1 billion traditional wings that year). At first, the change paid off. Buffalo Wild Wings’ shares soared as it crushed analyst expectations the following quarter with earnings per share of $1.36, beating calls of 79 cents.

Beyond the balance-sheet benefit, though, what was the real effect? Did this change actually suit Buffalo Wild Wings’ customers?

In January 2018, data from the NPD Group showed that U.S. restaurants sold 1.1 billion servings of traditional bone-in chicken wings in the 12 months ended September, or 64 percent of the overall wing market. And despite rising prices on bone-in wings, Bloomberg reported that traditional-wing servings rose 6 percent. Boneless wings? They fell by the same percentage.

For all of 2017, Buffalo Wild Wings missed not only Wall Street’s expectations for same-store sales, but it’s own guidance, too. It said comps would range between 1.6–1.7 percent for the year, which was worse than the 1.5 percent analysts anticipated and what Buffalo Wild Wings guided to after the boneless deal first bumped optimism.

As The Motley Fool pointed out, while the boneless deal helped bolster margins, bone-in diners are loyal.

Buffalo Wild Wings’ switch to the boneless deal improved its cost-to-sales margin by 40 basis points, year-over-year. It said it believed the campaign would continue to sequentially improve in the fourth quarter, making them 60 basis points lower than a year ago despite wing costs upping 50 basis points.

However, Buffalo Wild Wings didn’t get all of its franchisees on board, which prevented it from putting serious marketing spend behind boneless. 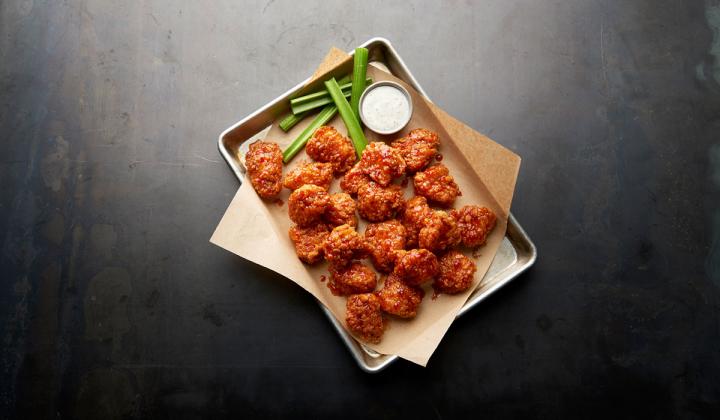 What’s clear so far in Buffalo Wild Wings’ new era, with Inspire Brands at the helm (the company was formed in the wake of the acquisition and now includes Sonic Drive-In and Rusty Taco as well), is that it isn’t afraid to pull nostalgia strings to regain customers.

The latest move takes on that highly publicized boneless-bone-in debate. For nearly 35 years, Wing Tuesdays was a fan favorite for Buffalo Wild Wings. “That’s why as Buffalo Wild Wings returns to its roots as The Great American Sports Bar, the foundational program is also coming back,” the company said Tuesday.

Announced first on Twitter by ESPN’s Adam Schefter, the chain reignited the deal as a dine-in, buy one, get one free traditional wing offer.

“We recognize how important Wing Tuesdays is to our story, and we’re thrilled to bring back this iconic program to all sports bars,” said Seth Freeman, chief marketing officer of Buffalo Wild Wings, in a statement.

But that doesn’t mean the chain is ignoring boneless. The brand said at a recent media event it plans to introduce new and improved boneless wings in November. Also, its kitchen crew will start hand battering chicken tenders and chicken sandwiches in the back of the house.

The hand-breaded chicken tenders will be beer battered. Tyler Riddle, Buffalo Wild Wings' director of culinary, said hand breading in-store is “something we’ve never done before. It's probably the biggest change both culturally and menu-wise that we've ever done.”

One other wing change coming: Buffalo Wild Wings is bringing bring “original buffalo sauce, just like you remember the first time you had it way back when,” Jamie Carawan, VP of brand menu and culinary, added.

If recent changes are any indication, going back would be a smart way for Buffalo Wild Wings to move forward.