Buffalo Wild Wings' wants to get customers back into the restaurant for March Madness.

The 1,200-unit brand is riding momentum into one of its busiest times.
March 2019 Danny Klein

Step inside Buffalo Wild Wings’ restaurant design of the future

Instead of referring to day-to-day obligations, however, “That’s March Madness” condemns watching the basketball tournament under sub-par conditions, such as a on a tablet or in your basement.

“We’ve been taught that you can watch the games anywhere—be it your phone, your office cubicle or the basement in your wife’s house, but as true sports fans, we know the unrivaled experience of watching the tournament across hundreds of TVs with wings, beer and your best friends by your side,” said Freeman, who was announced as Buffalo Wild Wings’ new CMO on August 27, in a statement.

The campaign is the first produced by Richmond, Virginia-based The Martin Agency since the group was appointed as Buffalo Wild Wings’ lead creative agency in November 2018. “Escape to Football,” was developed by Figliulo&Partners.

“Technology has changed. Streaming services are available and that’s crept into our everyday life. ‘That’s March Madness’ acknowledges that we’ve become isolated. And Buffalo Wild Wings represents the place we can come together, watch the games and go crazy,” Mik Manulik, associate creative director at The Martin Agency, added in a statement.

Buffalo Wild Wings will also release a spot titled, “Buffer,” which will be a digital-exclusive piece that portrays the “irritating experience of watching a game live on your phone with poor service.”

Additionally, if any tournament game goes into overtime, a spot called “Overtime,” will air during the first commercial break.

“Man Caves and technology have divided us, conquered us and allowed a part of our herd to be divided. Sports is about finding your tribe. At the heart of it, camaraderie is really what it’s all about. It’s time we take note of that,” said Scot Crooker, associate creative director at The Martin Agency.

Buffalo Wild Wings is carrying some momentum into one of its busiest times of the year. While the once-publicly traded chain stopped reporting financial results after its $2.9 billion sale to Arby’s (now Inspire Brands) last February, one of its largest franchisees has seen a significant lift from recent initiatives.

Diversified Restaurant Holdings, which operates 64 stores across four states, reported same-store sales growth of 2.2 percent in the fourth quarter, released March 7—its first positive period since 2015. DRH president and CEO David G. Burke said, “To capitalize on the NCAA tournament and to complement our focus to be ‘The Great American Sports Bar,’ there will be a strong traffic-driving media strategy alongside a new menu design, new and improved food offerings and enhanced food presentation.”

He added that same-store sales through early March continue to trend positive, despite weather issues.

Burke detailed some of the menu changes. He said there’s a new, fresh, twin patty All-American Cheeseburger. Significant upgrades to popular shareable items were made, too, including Ultimate Nachos, Hatch Chile con Queso, and a new salsa with house-made tostada chips. “Along with these menu items, the food presentation will also be greatly enhanced,” Burke added. “No more paper boards and plastic cups. We have all new plating which includes aluminum trays, craft paper liners, and stainless steel cups for staff.”

“Each of these items are truly a [big] change from our legacy,” Burke said. “And importantly, we will have superior products without materially higher costs. For example, the plateware upgrades pay back in just a few months, given all the illumination of many disposable paper products.”

He hinted that more menu items are planned throughout 2019 as Buffalo Wild Wings gears up for a “complete relaunch of the brand this fall.”

Buffalo Wild Wings also unveiled a cheeky, in-restaurant promotion for March Madness in “response to the spike in vasectomy procedures during the NCAA tournament, where thousands of men coordinate their doctor-ordered R&R to coincide with the biggest sports weekend of the year.”

The chain created the Jewel Stool, a custom-built barstool featuring a built-in cooling apparatus to provide numbing relief, as well as a chilled cup holder and “beer me” light. This will be available on a first-come, first-served basis at Buffalo Wings’ New York City Times Square and Koreatown (LA) locations.

This is a real thing, as the picture below proves. 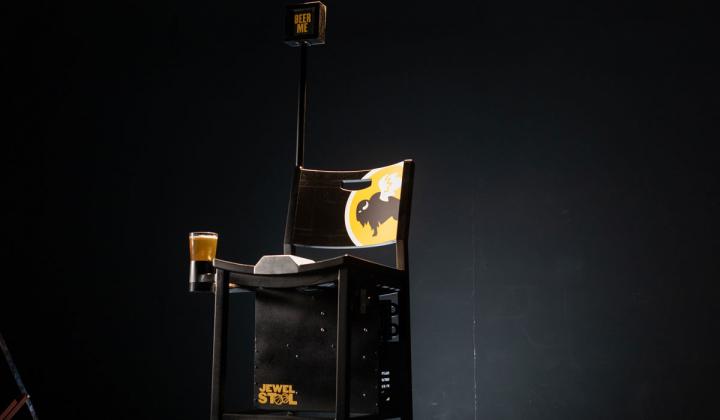