Buffalo Wild Wings is pulling out all the stops for football season.

With a refreshed logo, marketing campaign, and more, the chicken-wing chain is going all out.
August 2018 Danny Klein

With a new marketing chief at the controls, Buffalo Wild Wings unveiled an extensive new partnership and ad campaign Wednesday it hopes will turn its Sundays into serious traffic and profit drivers.

Kicking off Sunday, September 9—week one of the NFL calendar—Buffalo Wild Wings will showcase an exclusive game, menu, marketing push, and other activations, especially in regards to its Blazin' Rewards program, intended to capitalize on football season.

It starts with the 1,200-unit chain’s partnership with DraftKings, an online fantasy sports site. The parties created a custom-built fantasy football game—Blazin’ Fantasy Football—available on mobile through the Buffalo Wild Wings’ Blazin’ Rewards App. Exclusive to rewards members, customers can enter each week and compete for prizes, including free wings for a year, gift cards, and rewards points. Buffalo Wild Wings said there would be 600 total winners each week.

“As America’s largest sports bar, millions of fans spend their game days at Buffalo Wild Wings each week,” said Paul Brown, chief executive officer of Inspire Brands, the newly formed company that also includes Arby’s and fast casual R Taco. “We are thrilled to partner with the industry leader in fantasy, DraftKings, to deliver an experience to our guests that they can’t get anywhere else.”

The fantasy contests start at the beginning of each game and again at halftime of the 1 and 4 p.m. (eastern) contests. Customers have to download the Blazin’ Rewards app and then click the Blazin’ Fantasy Football icon. There they can pick a team and have the choice to “double down” on a player as their “Blazin’ Pick choice,” who receives double points.

Buffalo Wild Wings is banking on the promotion not only driving in-store traffic, but also helping expand its rewards program and database. In turn, the chain could remarket with future promotions and bring guests into its online ordering platform, boosting sales across different channels. Buffalo Wild Wings’ Blazin’ Rewards app went national last summer. At the time, the company said there were more than 2 million users signed up across the country. By October, there were more than 3 million. This effort will serve an engaged audience at least once a week, four times that day, in theory. What's to say a percentage of those guests won't become loyal diners during other occasions?

Buffalo Wild Wings’ fresh creative campaign, developed by Figliulo&Partners, launches August 30. Known as “Escape to Football,” it “explores the reality that everyone has commitments and obligations in life that can keep them from where they’d rather be on game day: watching football,” Buffalo Wild Wings said. These spots include characters in real-life scenarios, such as being stuck at a PTA meeting, taking family photos, or working late at the office. They then ultimately escape to Buffalo Wild Wings.

Above is Buffalo Wild Wings' old logo. Below are some examples of the new one, with a neutral brown and honey mustard color palette. 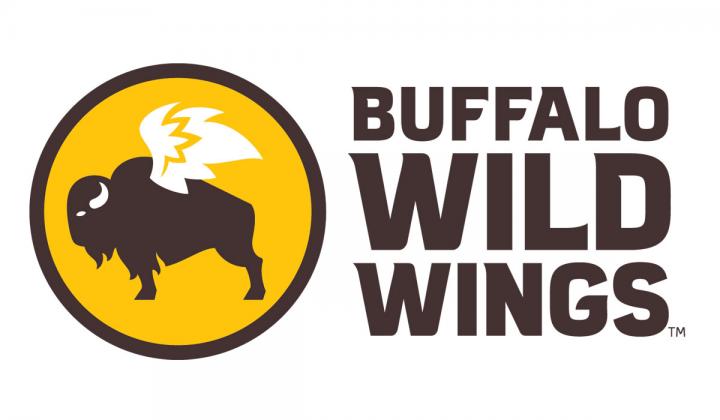 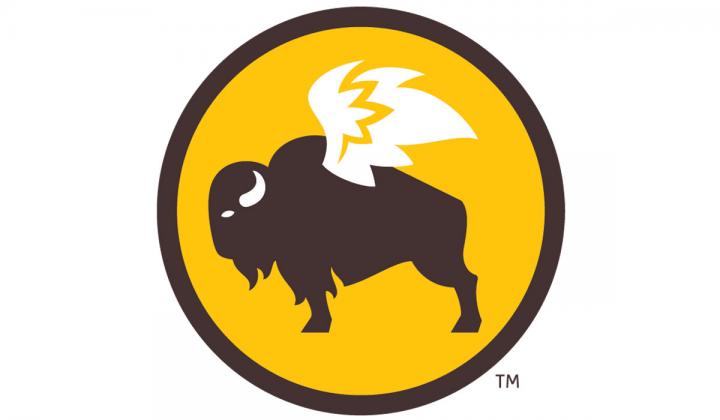 “We’ve all been there—it’s game day and we’re stranded somewhere, instead of watching the game live. It’s a painful, almost helpless feeling for any true fan,” said Seth Freeman, who was announced as Buffalo Wild Wings’ new CMO on August 27. “The new creative celebrates the reality that a game should be enjoyed with friends, surrounded by TVs, great food, and cold beer.”

Check out the four ads below, which will start airing on TV August 30 and extend throughout the 2018 football seasons. Additional spots will be available for radio and the campaign features a refreshed logo, with a neutral brown and honey mustard color palette and an updated buffalo that is forward-leaning.

A football menu focuses on value

Beginning September 6, Buffalo Wild Wings is also leveraging a new football menu that features options starting at $5. There are two new items: Bratwurst & Fries, and a 38-ounce domestic pitcher of beer option. The menu will be available Monday through Friday at participating locations.

These changes are perhaps the biggest since Buffalo Wild Wings came under new ownership in February. Arby’s Restaurant Group, backed by Roark Capital, purchased the chain for $2.9 billion and took it private as part of Inspire Brands. One franchisee, Diversified Restaurant Holdings, reported a 10.9 percent decrease in traffic at its 65 units last quarter.

This football-focused campaign, along with the possibility of sports gambling, are among Buffalo Wild Wings early efforts to reignite in-store business and drive comp sales back into positive territory. Before going private, the company estimated its financial performance for fiscal 2017 with same-store sales ranging from negative 1.6–1.7 percent, with total revenues for the year between $2.067–$2.069 million compared to $2.026 million in the prior-year period. In the third quarter of fiscal 2017, the company reported a net earnings decrease of nearly 20 percent as its cost of sales rose to 30.8 percent of restaurant sales from 28.9 percent during the same quarter last year. Buffalo Wild Wings posted adjusted earnings per share of $1.36. Same-store sales decreased 2.3 percent at company-owned restaurants and fell by 3.2 percent at franchise locations. Overall sales rose by 0.5 percent to $473 million while revenue also increased 0.5 percent to $496.7 million.