Buffalo Wild Wings’ football-focused fall campaigns are rivaled in scope only, perhaps, by its March Madness activations. Yet throughout the past year or so, one theme has held steady: A spotlight on dine-in experience. Mainly, why it’s worth travelling to Buffalo Wild Wings to do something more and more consumers are doing from their couch—watching sports.

Buffalo Wild Wings' response to the shift in consumer behavior, which is especially prevalent among millennials and younger diners, is to promote an engaging environment that’s a true fan oasis. Its campaign last year was dubbed “Escape to Football,” and presented people in real-life scenarios, like being stuck at a PTA meeting, and then showed them escaping to Buffalo Wild Wings. In March, Buffalo Wild Wings’ “That’s March Madness,” condemned watching the basketball tournament under sub-par conditions, going right at the heart of the matter. One ad showed someone struggling to watch a game with a tablet from their basement.

A Reenergized Buffalo Wild Wings Gets Back to its Roots

Inspire Brands’ 1,200-unit chain launched its latest iteration August 26, including a first-of-its-kind promotion Buffalo Wild Wings calls the “Football Prenup,” in an “effort to wake fans up from a domesticated daze and join their herd to enjoy football as it’s meant to be watched—surrounded by wild fans enjoying flavorful food and cold beer, whole basking in the glow of endless TVs,” the company said.

“We love all sports at Buffalo Wild Wings, but let’s face it, there’s nothing quite like football. While you’ve been grinding through a long offseason, we’ve been getting our sports bars ready for the next four months, so we can be there through all your team’s biggest victories and most crushing defeats,” Seth Freeman, chief marketing officer, said in a statement. “Our latest campaign is all about making sure fans don’t miss any of the action and experience game day as its meant to be experienced: with friends, wings and beer.”

What is a “Football Prenup,” exactly? It’s essentially a play on getting someone to allow you to watch football and head to Buffalo Wild Wings instead of other obligations. As the company puts it, “whether it be with your significant other dragging you to a lame gender reveal party or your roommate commandeering the living room to watch a reality TV marathon while there’s a full slate of games underway.”

Buffalo Wild Wings, along with 22squared, created the “Football Prenup” online as a “legally binding fan contract.” People can customize season-long terms. It works like this, Buffalo Wild Wings said.

Head to the site.

The company created a spot with football rules analyst Mike Pereira to explain, as seen below.

Buffalo Wild Wings partnered with several influencers on the campaign, including college football reporter and host Laura Rutledge and her husband, Josh, a retired baseball player. 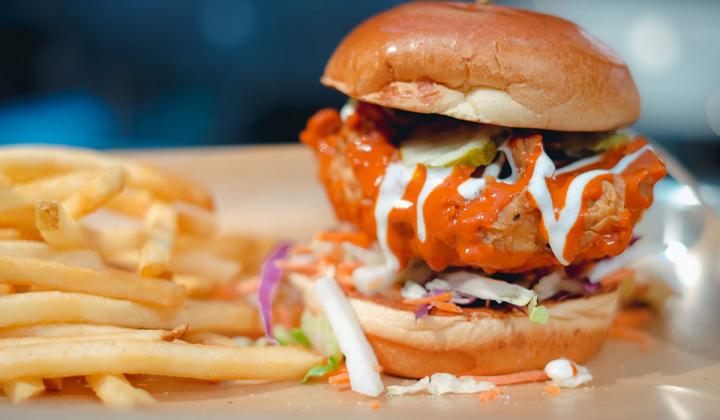 The football campaign in focus

The Martin Agency developed Buffalo Wild Wings’ latest messaging. It will feature eight TV spots throughout the NFL season. Again, as noted before, the ads “encourage sports fans to ditch the obligations that prevent them from watching the games in a bar filled with fellow fans, hot wings, and cold beer at the ready.”

The lead spot is a 30-second “Mancave” ad that calls the hideouts “one of the key enemies of football.”

“Mancaves aren’t some masculine refuge where all the guys come to hang out. That place is Buffalo Wild Wings, where jumping on furniture and screaming at the top of your lungs is actually encouraged,” the company said.

The brand added the higher alcohol volume creates a unique coating and a hand-breaded chicken product that’s crispy on the outside, while retaining flavorful and juice on the inside.

The kitchen crew is hand battering chicken tenders and chicken sandwiches in the back of the house. The launch followed Buffalo Wild Wings’ All-American Cheeseburger pulse in March. 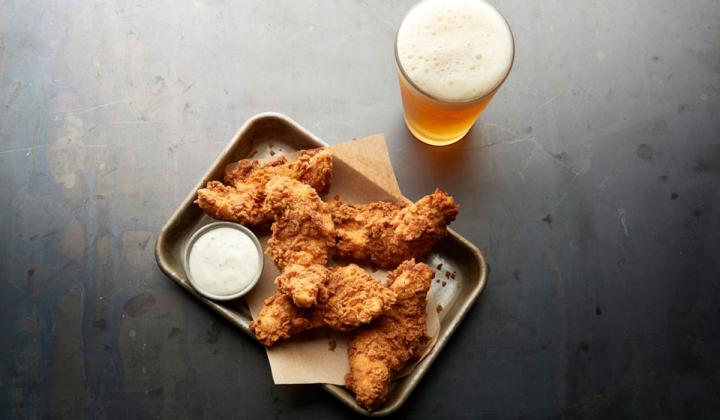 While Buffalo Wild Wings is now private under the Inspire Brands umbrella, we can take a peek into its performance by looking at Diversified Restaurant Holdings’ recent results. The 64-unit franchisee reported same-store sales gains of 5.8 percent in its most recent quarter—Q2 of fiscal 2019—with both traffic and average ticket up. That was the first time in more than four years (Q1 2015) DRH has seen the figures rise together. Revenue totaled $38.9 million, up 5.1 percent despite the company operating one fewer restaurant.

Interim CEO and executive chairman of DRH, Michael Ansley, called out the chicken refresh. Ansley took over for David G. Burke, who, along with CFO Phyllis Knight, stepped down in July. “The new hand-breaded chicken tenders, two new hand-breaded chicken sandwiches, and new improved boneless wings are truly a step-change in quality and product offering, and we believe will drive additional traffic,” he said in a release. 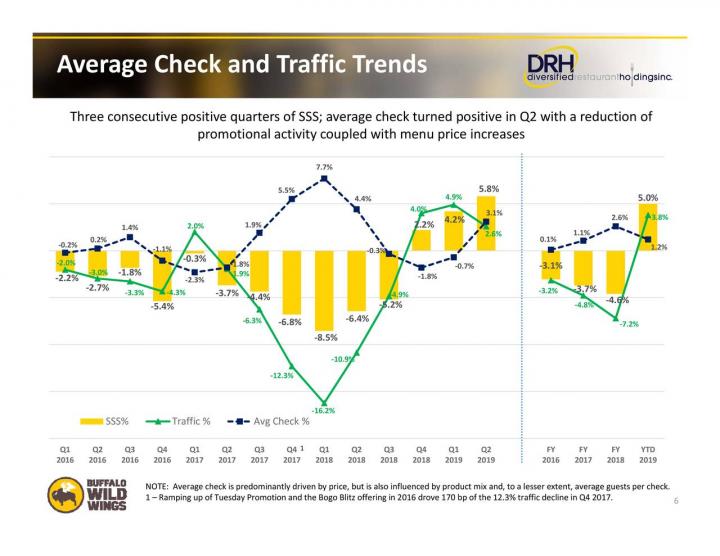 Buffalo Wild Wings killed the famed deal in July 2017 in favor of a boneless offering. The BOGO boneless promotion wasn’t related to inspiring traffic. In fact, the classic deal was one of the company’s major guest count drivers for some time. The end of the offering, however, was credited to historically high wing prices. The new version is a dine-in, buy one, get one free traditional wing offer.

Below is a look at DRH’s check and traffic trends. As you can see, recent promotions have pushed momentum in the right direction.

DRH also revealed in its presentation that new boneless wings, with less breading, are slated to arrive in November. Buffalo Wild Wings noted over the summer that an original buffalo sauce, “just like you remember the first time you had it way back when,” Carawan said, will be returning, too.

“Each new item is truly a step change in quality and product offering and we believe will drive additional traffic,” Ansley said. “You will see increased national advertising programs this fall with expanded emphasis on social media as we highlight our new product in value proposition around football.