Smokehouse Fajitas were added to the menu last year.

On the Border Evolves by Remembering the Past

The brand has added nearly two dozen new menu items in the past couple of years and revamped its online presence.

On the Border CMO Edithann Ramey keeps a realistic view of where the country’s largest Mexican casual-dining chain stands amid the pandemic.

The brand is 40 years old, and ownership has exchanged hands a few times in the past decade. After 16 years, Chili’s and Maggiano’s owner Brinker International sold On the Border in 2010 to an affiliate of private equity firm Golden Gate Capital. Four years later, the restaurant was handed to Argonne Capital, which remains the parent to this day.

Along the way, people began to look at the business differently, Ramey explains. Consumer research told On the Border it lost its away around menu and operations and became inconsistent in delivering the elevated experience customers were familiar with decades ago. Sales decelerated in response.

“When you look at that data, that tells you, hey, you used to be great. People loved coming here because being together was so much better than eating at home. And you enjoyed the bold, fresh, Tex-Mex food and you wanted to have a little fun, but it wasn't like that every time you came in. That was going to be the problem that we solved for.”

READ MORE: The Message is Clear: On The Border is Back

A “back to basics” mindset essentially became the rallying cry for Tim Ward, who joined On the Border as president two years ago. He evaluated operations, store design, and how the chain was perceived in the eyes of guests.

The brand took the pandemic as an opportunity to reset everything from the way it staffs restaurants to revitalizing the menu with bolder selections. It was bigger than reimaging a restaurant, but smaller than a total rebrand. It was more of a “rethink.”

“On the Border used to be the place where people would come and gather and where they would meet their friends and families and their community members and would celebrate on weekends or during the week or after a long day at work,” Ward says. “And I think the brand has gotten away from that, and we need to take that back and own that again and revitalize that to remind people we're still here and we're back.”

Ward remembers visiting several restaurants and recognizing that On the Border did a lot of things “good,” but that wasn’t going to cut it anymore. Food and services have to be great, to the point that customers are thinking about the next time they’ll come back as they head for the door.

For the menu specifically, food and beverage choices became complicated as the chain attempted to serve every guest and “be a little of something for everybody,” Ramey says. So while a large number of restaurants were shut down in the early days of COVID, On the Border found time to streamline the menu in a way that consumers allowed. The chain returned with focused options that sold well and were more representative of what the company stands for.

In addition to reductions, On the Border worked with internal and external chefs to put together new recipes that do a better job of delivering on flavor. By the fall of last year, the culinary team had introduced more than 20 new menu items, including Smokehouse Fajitas, a Loaded Queso Burger, Honey Chipotle Shrimp Tacos, and Monetery Ranch Chicken Torta. As for beverages, the restaurant rolled out several new hand-crafted Tex-Mex cocktails, like the Diamante Margarita with Maestro Doble Diamante Tequila, Ranch Water, and Maker’s ‘Rita.

After several years of negative sales growth, numbers are now trending upward. Average check is growing, and a solid portion of that expansion is from traffic, not just inflation-related price hikes.

“People couldn't believe that a brand like On the Border—which was just considered another Chili’s—this really unique Mexican restaurant delivered on something you would only get like in an authentic little Mexican place,” Ramey says. “So we're getting that much more excited about our innovation.” 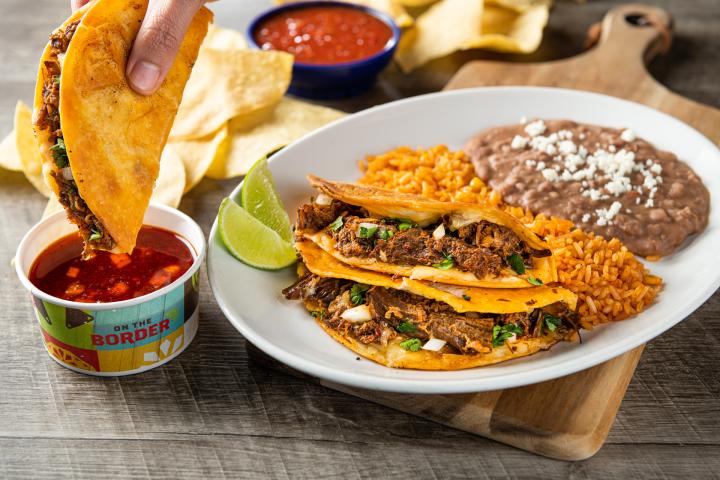 On The Border Mexican Grill & Cantina

“It's all about, sure you want to be as great as you were when you open your doors, but also maybe just slightly better. That was the thinking is that now every time you come into an On the Border—as best as we can and of course it's a journey—we're delivering an experience that's just as great as the first day we opened our doors," says Edithann Ramey, chief marketing officer for On the Border.

On the Border also owes some of its turnaround to what it saw in the marketplace, which is the fact that tech-forward brands are the ones experiencing the most success. So the chain redesigned its website to be more consumer-friendly, partnered with Olo to enhance the online ordering experience, rolled out an app in the latter part of 2021, and launched a Borders Rewards Program powered by Paytronix. There are now more than 500,000 loyalty members.

Although much has been accomplished, the job is never-ending, Ramey says.

“Tim and I were just having a discussion about what comes next and how do we make it easier for people to order from the table—maybe our next step in the journey?” the CMO says. “But that's how we're catching up is being a little bit more tech-forward.”

At the time of the Brinker sale, On the Border had 162 stores nationwide. The brand has since slimmed to 116 (109 corporate and seven franchises). But now with clear momentum, the restaurant is looking to once again spark expansion nationwide.

When Ward came onboard in 2020, franchising was dark; the FDD wasn’t updated and On the Border wasn’t considering any new operators. In the past two years, however, the CEO and his leadership team flipped the proverbial switch. A franchised location is scheduled to open this summer in Anchorage, Alaska, a new market for the brand. The overall pipeline includes more than 10 stores in various stages of development, with new units coming to Denver and Omaha and Lincoln, Nebraska.

On the Border is also piloting ghost kitchens with REEF, and expanding internationally, particularly in South Korea. The master franchisee in the country wants to open 120 restaurants in the next 10 years. Ward expects growth to be roughly 80 percent franchise going forward, and that’s because he believes operators can open at a faster rate in their respective markets and help On the Border fill whitespace.

A majority of the chain’s comeback deals with turning back the clock, but Ramey knows it’s impossible to return to day one, and that’s not what the company wants anyway. It’s more about moving forward, but never forgetting.

“It's all about, sure you want to be as great as you were when you open your doors, but also maybe just slightly better,” Ramey says. “That was the thinking is that now every time you come into an On the Border—as best as we can and of course it's a journey—we're delivering an experience that's just as great as the first day we opened our doors.”