Bombshells earned $15.3 million in revenue in its fiscal second quarter.

Bombshells Growth Vision is on the March

The sports bar's three-year goal is to reach 30 restaurants and more than $50 million in EBITDA, through a combination of company-owned and franchise growth.

Bombshells, a military-themed sports bar serving as an alternative to Hooters and Twin Peaks, is entering a new phase of growth, a feat roughly seven years in the making.

Parent RCI Hospitality Holdings, primarily an owner of nightclubs across the U.S., established the first store in 2013, and began a franchising program in 2015. However, given costs and newness of the concept, the company recognized it jumped too early into operator-led expansion. So in the following years, Bombshells opened more company-run stores across Texas to build critical mass.

By fall 2020, the emerging brand had 10 units, providing it with enough equity and awareness to ink a franchise agreement with a six-member investor group in San Antonio. The deal calls for three locations over five years, and the right of refusal for three more stores in Corpus Christi, New Braunfels, and San Marcos. The first restaurant opened in June, after being delayed six months due to supply chain and COVID issues.

“We've been talking to people off and on for five years,” says RCI Hospitality CEO Eric Langan. “We find operators that didn't have financial backing. We have people with financial backing that didn't have the right operators. A group of about six friends are involved in this. And combined, they just check every box for us. They have operators, they have the financial wherewithal to be strong for us, operating experience in the restaurant space. We just became very comfortable with them through the process and very excited to have them as our first franchise. We knew we had to have a group that wouldn't fail. If your first franchise fails, you’re in trouble.”

Bombshells, which now has 12 bars, saw revenue grow to $15.3 million in its Q2 (three months ending March 31), a 16.7 percent increase fueled by a new location in Arlington and a 2.3 percent rise in same-store sales. Alcohol sales accounted for $8.7 million while food and merchandise brought in $6.7 million. Operating margin was 22.6 percent versus 23.9 percent a year ago, mainly due to cost inefficiencies from initial operations of the new Bombshells unit.

The chain uses four dayparts that attract their own demographics—lunch (people working in the area), happy hour (male barflies), dinner (men, women, families of all ages), and late night (25 to 35 years old in a more nightclub environment). Much unlike others in the casual-dining segment, Bombshells has seen its late-night traffic remain strong since it reopened in May 2020. Langan attributes this performance to a combination of RCI’s nightclub experience and restaurant expertise from director of operations David Simmons, who previously worked at Planet Hollywood and Pizza Inn.

“It's been a great merger of the concept,” Langan says. “I think that's the biggest part of our success is that just the way our team works together to promote the different parts.” 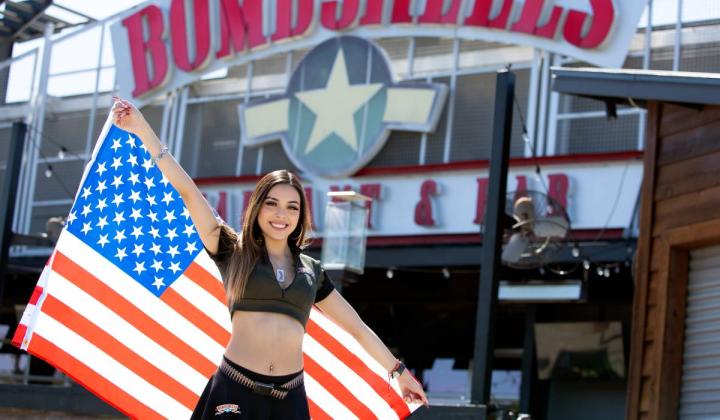 RCI Hospitality’s goal is to open six corporate stores annually in the next three years, and then ramp up franchising to the same pace. Eventually, Langan envisions operator-led growth to outpace corporate expansion.

Three company-operated restaurants are in various stages of development. A ninth Houston area store should start construction soon, and two more in Lubbock and Rowlett, Texas, are scheduled to begin in September and October, respectively. More corporate locations are being targeted for Dallas, Austin, Florida, and Arizona.

A second franchised outlet will begin construction in Huntsville, Alabama, in the late summer/early fall period as well. It will be the first Bombshells location outside of Texas, and one of three to open in the market in the next five years. Additionally, the San Antonio franchisees are looking for a second unit, and RCI Hospitality is in talks with three more franchisee groups.

Langan says the Huntsville restaurant is of particular interest because of its vicinity to Redstone Arsenal, which features NASA’s Marshall Space Flight Center and the U.S. Army Aviation and Missile Command.

“I just don't think that location can fail just because of where it's at and it's going to be the first of its kind in that marketplace, and with the military background and the Bombshells military theme, that city, I think it's just going to be a fantastic location for us. Everybody we talked to in that market is very, very excited about the concept,” the CEO says.

The San Antonio restaurant boasts 12,200 square feet of space, including 9,000 inside the store and a 3,200-square-foot outdoor patio. The store will begin with a staff of 250 people to keep up with extra pent-up demand that comes with an opening, Langan says. After that, it will hover around 175. Between Bombshells’ recognition in Texas and its social media presence, the CEO says the company doesn’t have to spend much on marketing. The San Antonio location had close to 5,000 applicants.

The unit can sit more than 500 people and includes more than 100 HD television screens. The location is similar to Bombshells’ Spring, Texas, outlet, except it makes better use of dead space and turned what would’ve been a private room for events into an open space more conducive to family dining. 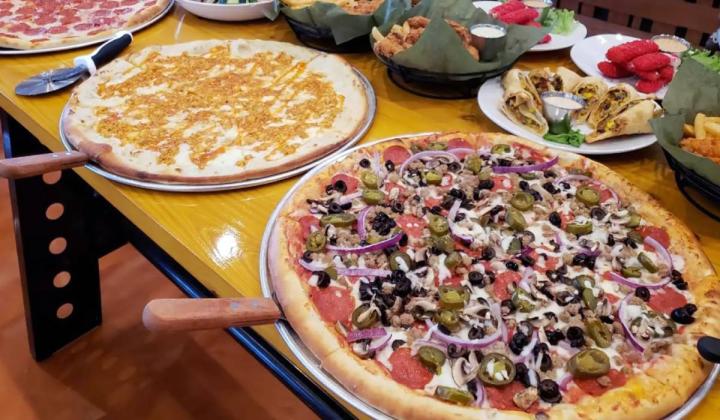 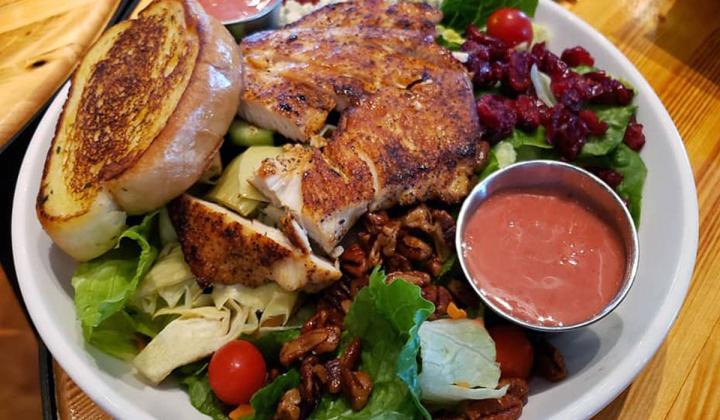 Because of the necessary size requirements, Langan prefers ground-up builds. He believes Bombshells can mitigate construction costs with measures like energy-efficient air conditioning and insulation so that it’s price tag is similar to that of a 6,500-square-foot second-generation build. He also notes that space is a must because of the chain’s experiential reputation.

“It's not a casual-dining concept. I mean yes it’s in the casual-dining category, so to speak, but that's not the experience,” Langan says. “The experience is you know eat, drink, stay, eat, drink some more, watch the games, watch the fight, or just hang out and listen to the music. The DJs come on at night. So we're like a restaurant, but we're just as much a bar.”

The three-year plan is to reach 30 restaurants and more than $50 million in EBITDA. Typically, it takes about one year to open a unit. Langan would like to decrease that timeline, although the current macroeconomic environment makes it a challenge. To help with its growth objective, Bombshells plans to bolster its store opening team in 2023 so that it could potentially reach 24 restaurants per year—either 16 franchises and eight company-run units or 12 stores each.

Looking forward, if RCI Hospitality isn’t getting enough out of Bombshells, it could potentially sell to a private equity firm. Or, once the chain reaches its $50 million EBITDA goal, the company could spin it off as its own public entity.

Langan said during RCI Hospitality's Q2 earnings call that it had been offered to rolls Bombshells into a special purpose acquisition company at a 14x multiple, or $280 million for a brand earning $20 million per year. But the company figured, in the next three years, the restaurant is projected to surpass $50 million. At a 14x multiple, that would value the brand at $700 million. So as of now, Langan says best option is to keep the concept in house, but that could change once RCI Hospitality reevaluates its strategies.

“The reality is we want to create whatever the best value as we can for our shareholders,” Langan says.