The growing diner elevated its evening service with upgrades across the board.
July 2019 Danny Klein

Black Bear Diner CEO Bruce Dean has been in this business for nearly 25 years, long enough to understand how the economy’s fitful cycles affect his restaurant. Currently, strong consumer confidence is influencing a host of changes. The most-often cited: higher checks to offset fewer guests, and additional business through off-premises pathways. For Dean’s 130-unit brand—one of the fastest-growing family dining chains in the nation—a different sort of dynamic developed. Black Bear has seen guests trade up and through to casual dining at dinner.

“As we looked at it, we said, ‘Obviously, we need to make some moves on our menu,” says Dean, who founded the brand with Bob Manley in 1995 in Mount Shasta, California. “And not only our menu, but our atmosphere.”

Essentially, Black Bear needed to ensure its dinner service could attract a completely different competitive set than breakfast. Also, the dinner daypart represents 31 percent of the brand’s sales, which is far higher than many of its family dinner peers, where it’s often a forgotten component. (Lunch makes up 37 percent and breakfast 32 percent). So Black Bear wasn’t scraping for share in a lagging segment, like IHOP did with steakburgers and lunch recently—it was making changes to guard a slice it already coveted. Recent consumer preference changes required Black Bear to step its game up, Dean says.

“It was clear to me that I didn’t quite have what I called the ‘wow effect’ at dinner as I did at breakfast,” he says.

In late April, Black Bear launched a series of changes to elevate its dinner service. These updates touched everything from culinary offerings to presentation to the music playing in the background.

Employees were the first line. Dean says workers themselves felt a little undervalued at dinner compared to other, perhaps busier shifts. To reinforce the new emphasis, Black Bear created a uniform that’s only worn after 4 p.m. The chain, which takes its roots from a logging community, has long fitted employees in Black Bear T-shirts and suspenders with dark jeans. It’s been the vibe for 24 years. At dinner now, though, workers put on a polo shirt and tie an apron that’s special to the service.

In tests, Dean says, employees reported feeling more confident and part of a unique club, responsible for doing something different, more elevated, and more polished than earlier blocks. “We found that we actually had higher levels of employees satisfaction along with guest satisfaction, because you’ve got to have a motivated employee if they’re going to take care of the guests,” he says. 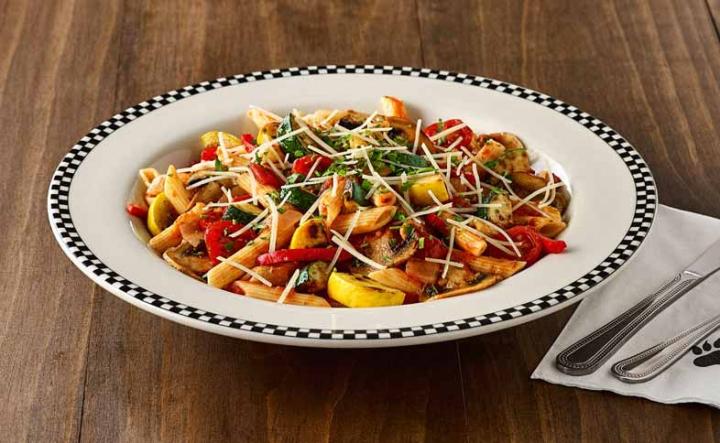 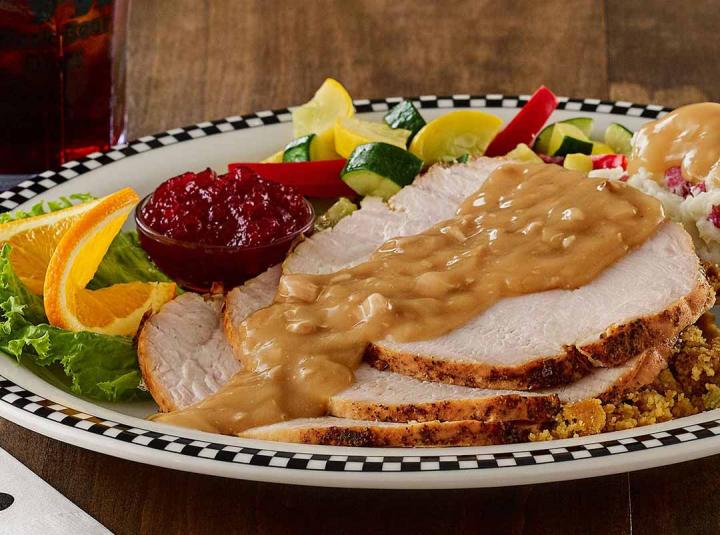 Black Bear Diner now cooks the meats for its dinner options in the afternoons instead of the mornings.

Once the switch flips, Black Bear, known for its jukeboxes, turns the music to easy listening. It was a big change from the typical country and nostalgic beats.

A quick side story: the jukeboxes are famous in Black Bear due to their history. When the restaurant first opened, Dean and Manley worked 38 straight days, open to close, for 16 hours a day without cutting a paycheck. They would instead raid the restaurant’s jukebox on Mondays and pay themselves in quarters. Not surprisingly, Dean and Manley each lost about 40 pounds.

Returning to the present, Dean says they asked the jukebox company to play something “people could relax with.” It was actually too laid back at first. Some franchisees requested more contemporary options and Black Bear adjusted. It’s been a work in process throughout.

To complete the ambiance, operators dim the lighting for dinner.

But the most important element in all of this was food. As Dean mentioned, Black Bear’s “wow factor” wasn’t carrying over to the extent the brand hoped. Patrick Griffin, Black Bear’s director of culinary services, helped devise fresh, savory offerings that meet the industry where it’s headed—with high-level, savory products customers were willing to spend on.

It started with three Carving Station Dinners: Santa Maria Tri-Tip, Smoked Beef Brisket, and Roasted Turkey. Additionally, Black Bear added Pasta Primavera to its Fit and Focused menu, and a roasted half chicken. The brand’s Comfort Food Dinners got an upgrade as well, including the guest-favorite Slow-Cooked Pot Roast, which now includes mushrooms and a rich beef gravy. The Housemade Meatloaf received a potion boost and the taste profile was enhanced.

Another thing Black Bear did to give dinner a signature personality was create exclusive experiences. There’s an All-You-Can-Eat-Fish Fry on Fridays and Prime Rib special on Fridays and Saturdays. And they all begin once the specified dinner time kicks in.

To accomplish these culinary changes, Black Bear had to adjust preparation. The brand starts cooking in the afternoons now rather than putting meat in its Alt-Shaam ovens in the mornings. The meats are carved to order. The half chicken is cooked that way, too.

It was key, however, as Black Bear breathed life into dinner, that all of the upgrades aligned with its persona. The items might surprise loyal guests, but they won’t feel like they’ve walked into a different restaurant. For instance, Black Bear serves choice New York strip and ribeye steaks at price points of $15–$17 for 10-ounce options. That value and quality proposition is something Dean says has fueled Black Bear’s growth from the outset. 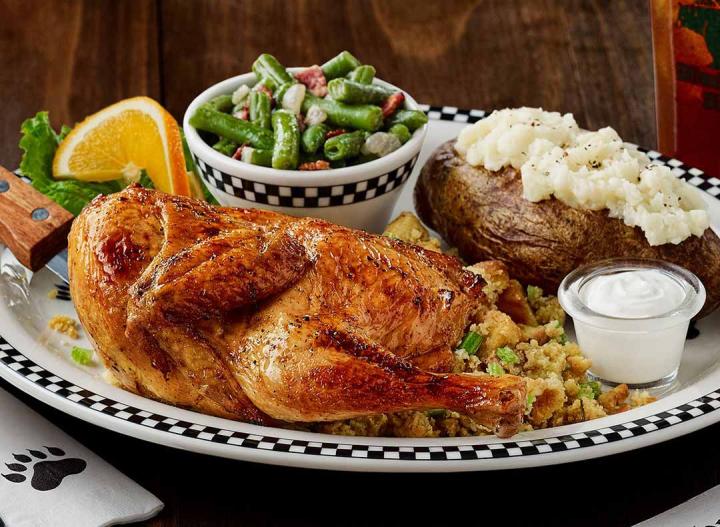 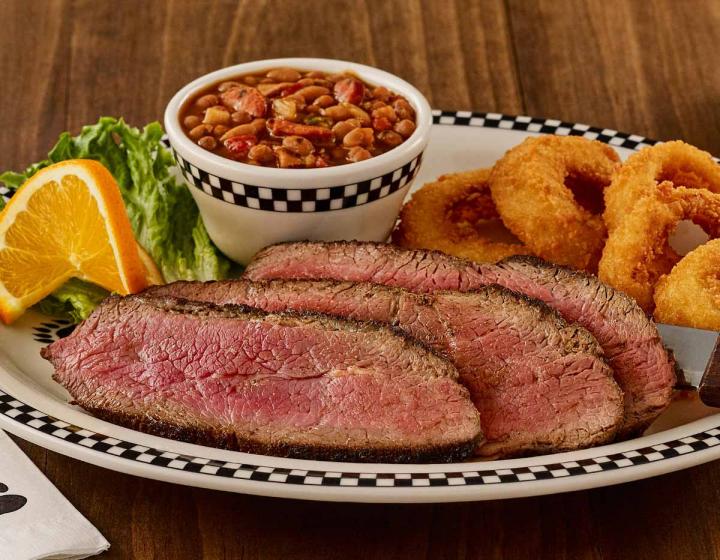 Black Bear Diner is carving the new dinner entrees to order. The half chicken (top) is even cooked to order.

“We’re always going to provide that experience,” he says. “The guest will know every time that what we’re offering is above the norm.”

That’s how Black Bear anchors its guest promise—value that’s not defined in price. “We measure value in what you get on the plate,” Dean says. “The quality. The large portions.” Dinner guests get a salad and a fresh baked cornbread muffin with their dinner for no extra cost.

The chain doesn’t discount and never has. “I don’t get in the 3 for $10 or 2 for $20, or whatever anybody else is doing,” Dean says, likely referencing deals at Chili’s and Applebee’s. “We try to provide a great price point that, again, with what they get, people perceive as great value.”

“People don’t always remember price,” he adds. “But they do remember the offering you gave them.”

As time progressed, Black Bear has learned a few things. Its significant senior population led the brand to move up dinner times a bit. And that may broaden even further eventually, “because you never want to say no to a guest,” Dean says.

In regards to growth, Black Bear is currently adding units in the Kansas City market and plans to continue building out Houston. It’s moving East and trying to curate the experience market to market to make sure it doesn’t fade into the crowded diner background.

“People are loving us,” Dean says, “ever since we’ve moved across the Midwest and the South. It’s exciting because you never know until you sit there and go, I think we’re going to do well in Houston and you open up and are, in fact, busy and people enjoy you and appreciate what you’re doing. It’s a big exhale, and that’s how it’s been so far for us.”