To mitigate inflation, the restaurant implemented pricing of 1.4 percent in November and 2 percent in February.

The Omicron variant hasn’t been easy on BJ’s Restaurants.

In the fourth quarter, two-year same-store sales improved from negative 1.4 percent in October to positive 1.8 percent in November, with top-line improving, the operating environment stabilizing, and more than half of restaurants staffed at pre-pandemic levels.

But as Omicron reared its ugly head, two-year comps turned negative once again, and BJ’s finished December down 3.3 percent. The chain attributed the decline to a pullback from customers, heavy rain in California, and an unprecedented level of exclusions.

The number of workers excluded for COVID-positive tests during late December and the first part of January was six times higher than the peaks of previous waves. The pressure forced BJ’s to limit operating hours and menu in several locations during January, resulting in a 9 percent drop in comp sales compared to 2020.

The 211-unit brand posted a restaurant-level operating margin of 10.1 percent, which was 580 basis points behind Q4 2019. To mitigate inflation, the restaurant implemented pricing of 1.4 percent in November and 2 percent in February.

But as Greg Levin enters his six month as CEO of BJ’s, he remains confident in the chain’s ability to return to industry-leading results.

“The pandemic has taught us to remain steadfast in our long-term strategy and operating principles, and to prepare for new scenarios as operating restaurants during these periods requires innovative and agile teams to quickly respond to changes in the environment,” Levin said during the company’s Q4 and 2021 earnings call. “In this regard, Q4 was no exception.”

Levin’s mindset begins with the fact that BJ’s has hired more than 7,000 workers since the start of the fourth quarter and managers came back to pre-COVID staffing levels.

Also, in the fourth quarter, fully staffed restaurants experienced two-year comp sales more than 10 percentage points higher and margins approximately 350 basis points better than understaffed units, proving to BJ’s that it’s a capacity issue, and nothing to do with guest affinity.

Inflation should improve, as well. BJ’s expects prices on key commodities to moderate over the course of 2022, so the chain locked into fewer annual pricing agreements than usual to benefit from anticipated declines.

“While we have seen new challenges present throughout this pandemic, we continue to meet the challenges head on, manage our business for both the near and long-term objectives, and remain steadfast in our focus on providing our guests with the best experience, which will allow us to continue delivering outsized growth in the years to come,” CFO Tom Houdek said. 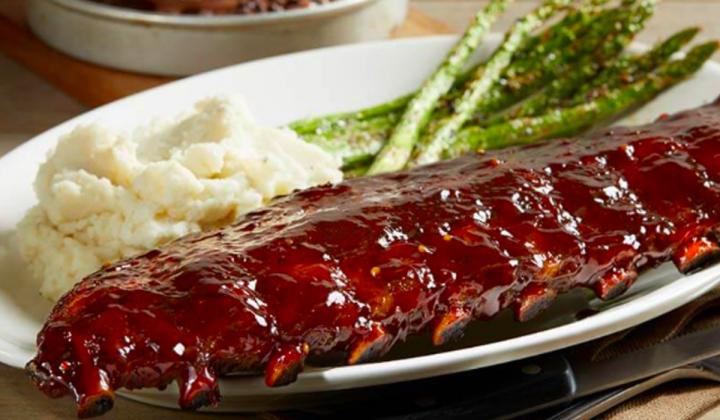 One of the keys to maintaining momentum will be optimization of the menu, Levin said. BJ’s wants to maintain its breadth—from fish ‘n’ chips to deep dish ziti—but focus on core items going forward. The chain’s chief brand and growth officer and head of culinary are completing a category-by-category analysis to achieve this goal.

Levin said the broad and differentiated menu gives BJ’s the ability to offer price points at all levels. The chain is leveraging this strategy to improve its lunch daypart, which weighed on two-year comps by three percentage points in Q4.

The restaurant is using introductory price points and pushing daily brewhouse specials to drive more customers toward the weekday lunch daypart, So far, tests of the lunch special have yielded more than a 600-basis-point improvement in traffic compared to a control group.

Additionally, instead of lowering portion sizes in the face of inflation, BJ’s is hoping to increase value of its meals by adding additional sauce to its chicken alfredo pasta, introducing a larger shareable pizza at a slightly higher price point, and increasing portions of its seafood taco offering.

“We kind of want to take a little bit of a different approach that we're seeing from other players out there using the term of inflation out there, maybe less wings or less size of something else,” Levin said. “We don't think that's the right strategy for BJ's. That's not what our guests are coming for.”

Levin’s optimism is also grounded in what he described as a “very significant near- and long-term restaurant expansion opportunity.” BJ’s hopes to open as many as eight restaurants in 2022, but the number depends on timing of permits and receiving crucial equipment, like HVAC systems.

Eight restaurants would be about 4 percent unit growth. BJ’s goal is to exceed 5 percent in the future. The CEO said upcoming restaurants will be similar to the most recent prototype, with more of a focus on off-premises. Channels outside the four walls are still doubling pre-COVID levels.

“I think we can do [5 percent plus unit growth] with high quality,” Levin said. “I think you layer on top of that the ability to drive comp sales and then leverage the middle of the P&L, and I think that gets to a strong earnings cadence, going forward. This year, the reason we said as many as eight, and originally—we were talking eight to 10—is we are seeing a lot of challenges getting through the permitting and planning at a lot of communities.”

BJ’s also plans on launching a remodeling program later this year, including expanding table capacity and “solidifying our brewhouse authority,” according to Levin. The CEO said about one-third of the footprint—mostly the older models—has the ability to add up to 24 seats.