The brand continues to grow and innovate the restaurant experience.
April 2019 Rachel Taylor

Even though the months of March and April tend to be the most unpredictable for BJ’s Restaurants—tax season, spring breaks, and holidays, like Easter, can all have a major impact on traffic trends—this past quarter proved to be another step forward for the polished casual brand. In fact, March was the strongest month so far this year with a 4.2 percent increase in same-store sales versus the year-ago period.

BJ’s is starting to lap its own high-level success. Here’s how it’s trending in same-store sales:

Over the last two years, 204-unit BJ’s opened 15 locations outside of its core markets of California, Texas, and Florida. The new stores are averaging $5 million in annual sales, the company said. These results add to the brand’s confidence it’s on the right path to 425 restaurants nationwide, CEO Greg Trojan said.

These new menu choices drove customers into the restaurant, which in turn raised check.

During Q1, check averages upped 1.3 percent. The goal for 2019 is to grow 2.5–3 percent, Trojan said. So far, the company is falling slightly below that goal due to promotional discounting and redemption activity from loyalty rewards program members.

To offset the soft beginning of the year, BJ’s plans on stepping back from heavy discounting. BJ’s Brewhouse Specials, which include 50 percent-off large pizza Monday and $3 Pizookie Tuesday deals, are driving traffic and turning diners into repeat customers. In turn, BJ’s marketing strategy is shifting to highlight those deals via TV, digital, and loyalty messaging, “in lieu of more traditional deeper discount offers,” Trojan said.

Guest traffic during Q1 shows this strategy is working. This strategy remains fluid for BJ’s as it tries to figure out the formula to balance high-quality products at an attractive price while giving value to the loyalty program, and guarding profitability. BJ’s is also making adjustments to factor in promotions to accommodate guests who plan on dining out for Mother’s Day, Father’s Day, and graduation during the upcoming second quarter.

Trojan said off-premises is another part of the mix that will drive traffic and increase check averages for BJ’s. Off-premises sales hit an all-time high during Q1, making up 10.1 percent of all sales, Trojan said. That still leaves BJ’s plenty of opportunities to expand the channel.

“We've seen leaders in this space achieving about 15 percent of their sales in these channels and we see no reason BJ's can't achieve similar levels over the next few years,” Trojan said.

Catering and large party orders will play a role in achieving this target. To fit this new sales avenue into the restaurant without putting a strain on dine-in business, BJ’s redesigned its kitchens to maximize efficiencies.

The rollout of the “Gold Standard Kitchen Systems” initiative began earlier month, the company said. By evaluating each aspect of the kitchen, BJ’s put together a smarter system that helps with ordering, inventory, preparation, and cooking. The changes will allow BJ’s to experiment and transform menu items to work for delivery and catering menus.

“While maybe not as attention grabbing as some of our new menu introductions or marketing campaigns, I think it's as important as anything else we are accomplishing this year,” Trojan said.

By the end of Q2, the new systems will be installed at all locations. Levin estimated each restaurant would need to invest at least 125 hours in training. The company hopes these changes will improve kitchen conditions and the overall work environment at BJ’s, which in turn will reduce turnover and attract employees to stay committed to the brand.

“This focus on driving sales, while being maniacal on productivity and efficiency, combined with a balanced approach to new restaurant growth, are fundamental to our near and long-term operating success,” Levin said. 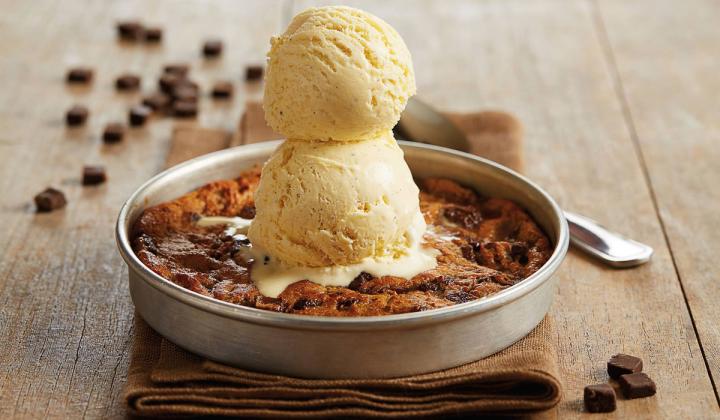 Off-premises sales hit an all-time high during Q1, making up 10.1 percent of all sales.

In order to streamline the off-premises experience, BJ’s updated technology throughout the restaurant. BJ’s app and online ordering capabilities are evolving as the company shifts focus. Eventually, with the use of geofencing technology, customers will be able to walk into a BJ’s for a carryout order and see exactly where their order is—whether it’s still being cooked or if it’s waiting for them to pick it up.

This isn’t the first time BJ’s has invested in tech. Servers and front-of-house staff use handheld tablets to help speed up the ordering process, especially when the restaurant is operating at peak hours. The tablets allow customers the chance to interact with the loyalty program as well.

While tech is important to keep pace with competitors, Trojan said he doesn’t want it to take over the dining experience at BJ’s.

“We are still very interested in making our dining experience very personable from a server perspective,” Trojan said. “Quickly reordering the second beer or a Pizookie and make the paying part of the transaction a lot more seamless as well, we view as real opportunities.”