Beef 'O' Brady's is upgrading its menu to entice customers this summer, but will maintain its daily value specials, including $7.49 Burger Monday.

The sports bar's AUV reached a record-breaking $1.5 million this year.

Beef ‘O’ Brady’s, like others in the restaurant industry, is wading through an unprecedented macroeconomic environment. In response, the 142-unit sports bar is firing back with some unprecedented numbers of its own.

The brand’s same-store sales rose 12.9 percent in the first quarter year-over-year, boosting it to a record-breaking $1.5 million in AUV. The top quartile is exceeding $2 million AUV. CEO Chris Elliott says Beef ‘O’Brady’s remained positive through April and May, and that’s with significant rollovers of last spring, when massive pent-up demand began to really manifest itself across the country. Off-premises, which reached as high as 30 percent during the peak of COVID, has settled in at 18 percent—that’s still double what the chain brought in prior to the pandemic.

Elliott, however, acknowledges prices increases have elevated Beef ‘O’ Brady’s numbers in the first half of 2022. In Q1, traffic was essentially flat year-over-year, meaning most of the growth came from average check. The same is the case for Q2 thus far, with traffic being slightly negative.

“My sense is across the industry, that's what most people are seeing,” Elliott says. “You always want to keep your traffic up. What really complicates this is the rollovers from last year are significant because traffic jumped up big last year. All the growth last year was just traffic and now we're rolling over that. And there's some softening in the traffic, and I think it's a direct reflection of just inflationary pressures across everything and the fact that most restaurants have taken price.”

READ MORE: It’s All Coming Together for Beef ‘O’ Brady’s

To the CEO’s point, the food away from home index rose 7.4 percent in May year-over-year, the biggest 12-month increase since the period ending November 1981. Full-service menu prices soared 9 percent compared to 2021.

Elliott believes core customers have been “very understanding”—the best way he can put it.

“We've been able to hang onto our regulars for sure,” the CEO says. “I think people have not stopped eating out. They just don't eat out as much and most of where we've seen drop off has been somewhat at lunch and somewhat late night. Otherwise the business is really pretty solid.”

Pricing has been necessary to maintain margin integrity, but the executive says Beef ‘O’ Brady’s has also looked at every possible way to give back to consumers and motivate them to return.

One of the bigger initiatives is a new and improved menu coming June 27, something that’s been in the works for the past year and a half. Most importantly, the chain is keeping its five weekly value specials, with some slight tweaks: $7.49 Burger Mondays (build-your-own burger plus fries); $7.49 Taco Tuesday (two tacos plus chips and salsa) and $2.99 Kids Meal Tuesdays; Boneless Wing Wednesday (buy one, get one free); $10.99 Philly Cheesesteak Thursday; and $9.99 Fish & Chips Friday (four fried cod fillets, fries, and coleslaw). For the weekend, there’s not a special, but customers get double rewards points for anything they buy. 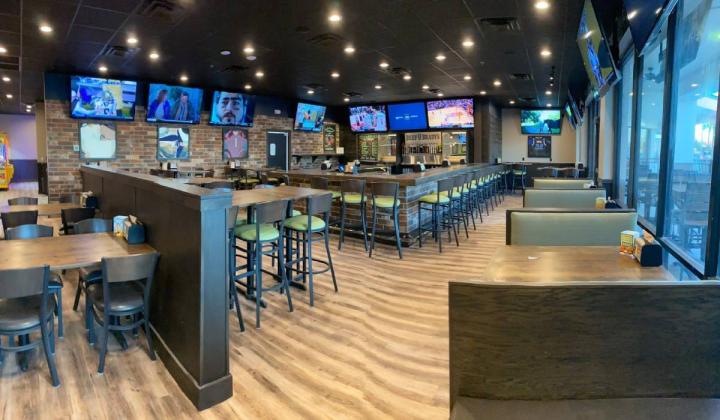 “These are [sales] numbers that not only had never been seen before, I don't think anybody ever thought was possible, and that's created a lot of additional interest in in the brand,” says Chris Elliott, Beef 'O' Brady's CEO.

Previously, Beef ‘O’ Brady’s removed wings from the menu because of historic inflation, but the item returned at 99 cents per piece. Also, $10.99 Philly Cheesesteak Thursday is replacing $11.59 Fajitas Thursday, and $9.99 Fish & Chips Friday is taking the place of Surf and Turf, which was around $14. In addition to the daily specials, the company is launching a two for $25 in which customers can choose among four appetizers and nine entrées.

New and upgraded products will include enhanced nachos and tacos, chopped steak and gravy, loaded fries (cheeseburger fries and buffalo ranch fries), and an old favorite, the Dubliner, an open-faced steak and gravy sandwich.

“With staffing issues and supply chain issues that have existed for the last 18 months, our franchise community came to us and said staffing stores and providing great service is the most important thing we can do,” Elliott says. “Please don't throw any menu changes at us right now—any new products or new deals or new complications. Let's keep it simple, and let's just execute in the four walls. That's what we did.”

“ … So after having done really not much with the menu for 18 months, now all this is coming,” Elliott continues. “It was all tested and all working toward giving the consumer some better options and some really good value under the circumstances.”

Beef ‘O’ Brady’s sister concept, Brass Tap, instituted a new menu amid the pandemic, as well. The bar also implemented a brunch program to build weekend sales, but Elliott isn’t sure the same initiative will carry over to Beef ‘O’ Brady’s—at least not within the next few months. Instead, the sports bar is working on rolling out catering, a program it's held back due to supply chain issues with paper and plastics and wanting to remove complications from franchisees’ plates. Catering is scheduled to go live in August.

The concept is also working through new technology to improve the experience of both employees and guests. Last year, the first big push was with back-of-house labor. Beef ‘O’ Brady’s searched for ways to take as much preparation out of the kitchen as possible without any degradation in product quality. Whereas team members pre-cooked, sliced, and reheated meat, now everything comes pre-sliced and cooked to order. The same is true for vegetables that used to be sliced by hand. Elliott estimates the chain removed about 20 hours of preparation per week, which has made the kitchen much easier to handle in the morning.

In the front-of-house, Beef ‘O’ Brady’s is testing a self-serve kiosk and order-at-the-table technology. Thus far, the kiosk has not performed well, but it’s only been live for a couple of months. Elliott says the chain will continue to experiment for six months and see if it becomes more popular. There’s a lot more confidence behind the order-at-the-table innovation.

“We give customers a lot more flexibility, and basically we're fine-tuning the technology to start that test this summer,” Elliott says.

The initiatives, combined with growing sales, have sparked intrigue among franchisees looking to grow. Beef ‘O’ Brady’s was once as high as 270 units, but struggled through the Great Recession. With new AUV ceilings, interest has been reignited, Elliott says.

There’s approximately 15 units in the pipeline; six stores are scheduled to open this year. The chain has agreed to six franchise deals in 2022 so far, and hopes to reach as many as 15 by the end of the year. For the next handful of years, Elliott expects an annual cadence of five to six openings, but he’s hoping as attraction grows and AUV rises, the pipeline will continue to build and Beef ‘O’ Brady’s can reach 10-15 per year.

“These are [sales] numbers that not only had never been seen before, I don't think anybody ever thought was possible, and that's created a lot of additional interest in in the brand,” Elliot says.