California Pizza Kitchen expects to open 10 to 12 restaurants in 2022.

The chain initiated a domestic franchise program for the first time in its 35-year history.

California Pizza Kitchen hired Giorgio Minardi as executive vice president of global development and franchise operations in the fall of 2019 with the intent of initiating its first-ever domestic franchise program.

The brand made the move not knowing that in the following months, the restaurant industry would be completely disrupted by an unprecedented global catastrophe. CPK is familiar with COVID’s impact as much as anyone. Dine-in sales dropped 77 percent in the final week of March 2020, and the restaurant shut down nearly 50 stores that couldn’t offer off-premises.

Four months later, CPK was forced into bankruptcy, not only because of systemwide COVID shutdowns, but also due to the growing competition of fast casuals, the limitations of malls, and the acceleration of third-party delivery. Even prior to 2020, the brand faced liquidity issues and hired a new management team to improve its financial position. CPK went as far as retaining Guggenheim Securities and Kirkland to explore M&A opportunities, but the pandemic stalled efforts.

In the midst of bankruptcy, the chain attempted a sale again, but received no qualified bids for its assets. So CPK used its other restructuring option—reducing its roughly $400 million debt by more than half and removing near-term maturities.

After emerging from bankruptcy in November 2020, CPK hired CFO Judd Tirnauer, an industry veteran with more than 25 years of experience in progressive finance and strategic planning. The company also exited court proceedings with a renewed marketing effort, improved off-premises measures, and the same instinct for menu innovation.

In 2021, sales clawed back to pre-COVID performance levels. Now the brand is returning to what it set out to do when Minardi came onboard—solidifying franchise partnerships and kickstarting U.S. expansion.

“[Previously] they would prefer just to focus on company because obviously the margins were much, much bigger in that sense,” Minardi says. “Myself, I come from the franchising industry from McDonald's to Burger King, I worked in Dunkin’ Brands, so I understand the value of having great franchisees in the system, how that could help accelerate growth on one side, but also keep the system humble.”

When CPK appointed Jim Hyatt as CEO in early 2018, the chain was approaching 300 locations in 13 countries and U.S. territories. In the years since, the unit count has fallen under 200, with about 150 in the U.S. and 40 internationally. Minardi says the goal is to shift that trajectory and reach at least 300 restaurants globally in the next decade, including 25 U.S. operators.

The pizza chain leverages three main methods of growth—international franchises, company-run locations, and contracts with nontraditional locations in the U.S. like airports, casinos, and stadiums. With the new domestic franchise program, CPK will work to fill the rest of the country; the brand doesn’t operate in 23 states, which Minardi describes as “tremendous” white space.

Four layouts will be offered to potential candidates. The first is the “flagship,” a design that comes with an extended bar and outdoor patio within 5,800 square feet or more. Then there’s the “standard,” a roughly 4,800-square-foot prototype with a counter bar. The final two are smaller versions; one is a kiosk for malls, business centers, and parks, and the other is an express model for concession-style counter service in stadiums and universities.

Given the shift toward off-premises and the difficulty of finding 6,000 square feet of space in today’s market, Minardi says the standard, 4,800-square-foot prototype will likely be the “bullseye” with future franchisees. 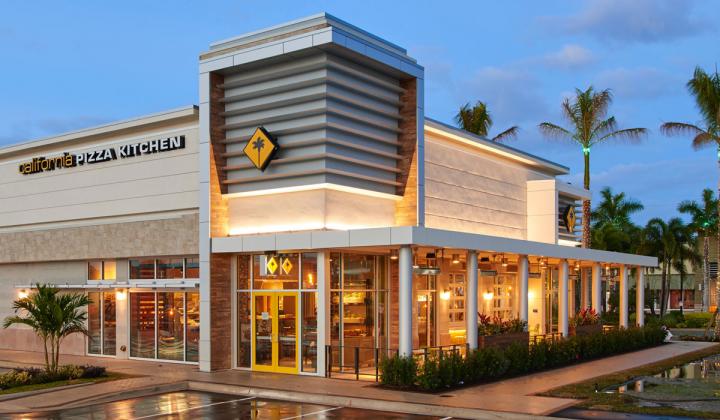 CPK is known for its adjacency to malls, which have suffered greatly in recent years. In August 2020, Coresight Research estimated 25 percent of U.S. malls will close in the next three to five years. Most of the at-risk venues are B, C, and D-rated malls that bring in much less revenue than A or A++, but higher-end locales have proven to be vulnerable, as well. Last year at this time, real estate analytics firm Green Street estimated the values of A-rated malls dropped 45 percent from 2016 levels.

CPK is taking a similar stance.

“The malls that are investing in the business, investing in technology, allowing delivery from the malls,” Minardi says. “The mall industry has had to also adjust a little bit to the pandemic. So I think that we know them and some of them are doing a great job and so we hope to partner with them also soon.”

The pizza concept plans to keep California and the Southwest for company-led growth, and leave the rest of the U.S. for franchisees. Minardi says the search for operators will be meticulous, and that the chain will be guided by three business profiles—families, multi-brand companies missing a casual-dining brand, and larger private equity companies looking for big chunks of a state rather than just a city.

After opening about a half-dozen restaurants in 2021, CPK expects to raise that total to 10 to 12 this year, with debuts in Chile, Costa Rica, Nigeria, and Canada. On top of that, the plan is to add two domestic franchisees.

Minardi says that by going through the restructuring process, CPK has “managed to really reposition and clean up the system and the portfolio in order to now be very aggressively in line to do what we need to do.” That includes a bigger investment in marketing, such as becoming the official pizza of the Los Angeles Dodgers.

More menu innovation is on the way, too, with the piloting of a new Lunch Duo menu (entree paired with soup or salad) in Southern California. As part of the offering, the brand created two salads, two soups, and three sandwiches, and the chain is allowing guests to select from the entire pizza menu instead of the usual four options, BBQ Chicken, Pepperoni, California Veggie, and Mushroom Pepperoni Sausage. Along with that test, CPK will explore more menu items in the breakfast and brunch space later this year.

Minardi says COVID and the bankruptcy proceedings were “painful,” but also worthwhile, as the chain returns to its true growth potential.

“I think we are now back on the forefront and we have our strategies that hopefully we can execute,” Minardi says. “But yeah, we're very excited. We just hope that this pandemic will start to take a back seat so we can really push harder because I think we have quite a lot of activities in the pipeline.”