Applebee's is Thriving at a Level Not Seen in Years

Same-store sales grew 6.2 percent in compared to 2019, the best performance since joining Dine Brands in 2007.

After serving as Applebee’s chief marketing officer for five years in the early 2000s, John Cywinski returned as president in March 2017 to a challenged brand.

Domestic same-store sales dropped 7.9 percent in Q1 2017, and hadn’t seen positive growth since Q2 2015. The brand said its declines in traffic and comps were larger than those experienced in the overall casual-dining segment due to “previously implemented tactical initiatives that did not generate desired results” and “inconsistent quality of operations across the Applebee's system.”

For Cywinski, the first step was reminding Applebee’s of what it stands for, and that’s “eating good in the neighborhood and foods that you can pronounce that are broadly appealing and mainstream.”

Each restaurant had to communicate this effectively, and it was clear when he arrived some stores weren’t capable of doing so. Applebee’s is a 41-year-old chain, and over time, trade areas naturally move and restaurants must relocate or shut down—that’s the typical management of a concept this size. But it wasn’t happening at the time, Cywinski says.

The brand had 1,850 U.S. restaurants, and leadership decided to slice roughly 300 underperforming locations out of the footprint. That long journey concluded in 2021 when Applebee’s shuttered 25 domestic units, its lowest total in five years. That left it with a tighter, more efficient 1,578 restaurants nationwide.

The goal is to recapture net unit growth in 2023.

“The brand is exceedingly well-positioned right now to thrive, to flourish—use whatever term you want,” Cywinski says. “Our franchisees are more enthusiastic than they've ever been. I've got a great set of 30 franchise partners, so we are poised for sustained growth and better-positioned than at any point in my most recent five-year tenure here.”

Unlike 2017, tactical initiatives are now working. Same-store sales increased 6.2 percent in 2021 compared to 2019, and average weekly sales reached $50,500. Both represented Applebee’s best performance under Dine Brands, which formed in 2007 when IHOP Corporation bought it. For context, the chain’s comps decreased 0.7 percent in 2019.

Using Black Box Intelligence data, Cywinski says Applebee’s outperformed the casual-dining category for 51 weeks—the first week of 2021 being the exception—by an average of 740 basis points. On a 2021 versus 2020 basis, it sailed the segment by 960 basis points.

Applebee’s opened five restaurants in 2021, and Cywinski expects that to double this year, with a mixture of traditional outlets and ghost kitchens. The brand is still in the early innings of ghost kitchens, with two in Philadelphia and a third coming in Miami, but the growth lever appears promising in densely populated geographies where brick-and-mortar may not fit.

Cywinski describes the development strategy as opportunistic, with potential conversions, smaller footprints, and even endcap/inline units.

The most innovative option may be the drive-thru pickup window, which was first opened in Texarkana, Arkansas, by franchisee Alan Smith. A third unit is scheduled to open in Columbia, South Carolina, in the next couple of weeks. The drive-thru lane is virtual, meaning customers order ahead and simply come through the lane to pick up their order. 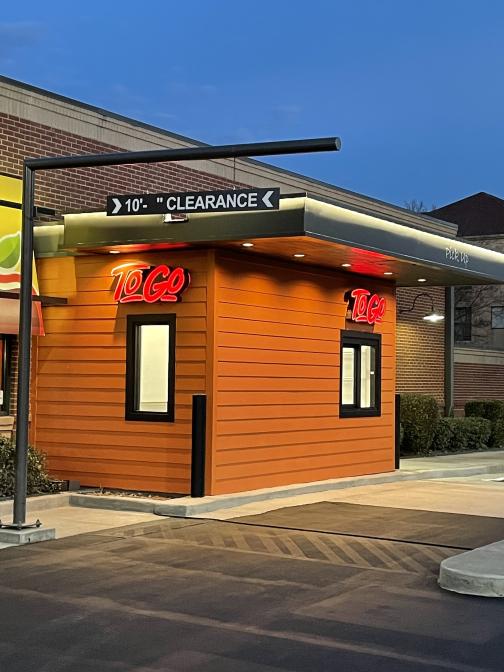 The sample size is small and Cywinski would like more geographic dispersion before assessing the true ROI, Adding the window could cost $100,000, depending on the market, and the drive-thru lane does remove some parking spots.

But Applebee’s has seen significant operational and financial benefits.

“In cold weather geography, you really don't have to deal with weather anymore,” Cywinski says. “I don't have to have team members going out to a car. I can operate later at night because there's less concern about safety after it gets dark.”

Off-premises remains a focal point for Applebee’s, even as the U.S. approaches the two-year anniversary of the global pandemic. Sales outside the four walls mixed 26.7 percent in the fourth quarter. Average off-premises weekly sales were $13,800 in Q4, more than double pre-pandemic and only $500 fewer than Q4 2020, a time when a large number of dining rooms were restricted.

Applebee’s earned about $1 billion in off-premises sales in 2021. Of the roughly 27 percent mix, 14 percent is carside and 13 percent is delivery.

“We believe in digital, and most of our off-premises orders come to us digitally,” Cywinski says. “Candidly, we have phenomenal team members, servers, bartenders, kitchen cooks, but the core competency isn't answering the telephone and taking orders. That's not really what we want them doing. So we're trying to convert all of our guests to order food to-go—whether it's to-go or delivery—to do it through our call center or to do it online. Therefore, our team members of the restaurant can stay focused on executing what they do really well.”

In 2021, Applebee’s launched virtual concept Cosmic Wings to appeal to its Gen Z and millennial audience, which makes up about 52 percent of the customer base. The digital brand started on Uber Eats, but was forced to take a brief hiatus because it couldn’t gather enough wings from the supply chain to meet demand.

Cosmic Wings is back in full force and expanding to DoorDash, the largest of the third-party delivery providers. In April, it will be on Grubhub.

“At that point in time I'll know with pretty good precision the size of Cosmic Wings’ opportunity, but it's incremental, it's targeted, it's cool, and our guests love it,” Cywinski says. 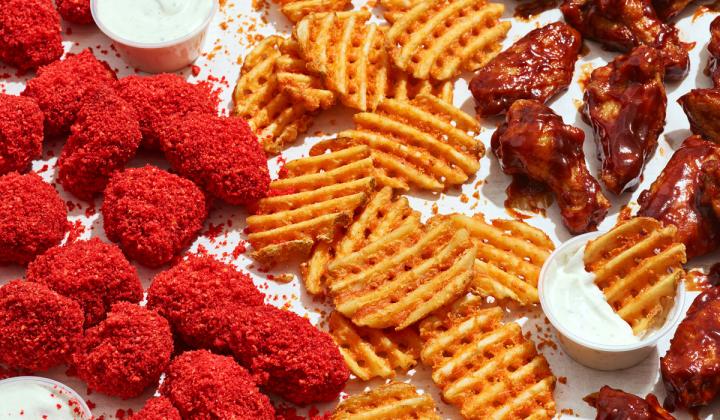 All the pieces are coming together for a major growth turnaround.

Advancements are being made in the dining room, as well.  Applebee’s is piloting three different POS systems for a full rollout in 2023. Cywinski says the brand should know which one it’s moving forward with by August. The technology currently in place is about 20 years old.

The updated system involves handheld tablets for servers as opposed to moving back and forth to a POS terminal. This gives waiters the ability to cover more tables and earn more in wages. Applebee’s will pay for the infrastructure while franchisees cover the actual hardware, ongoing maintenance, and licensing fee.

The new technology will play a key role in recruitment, which already appears to be going well for Applebee’s. The chain held a National Hiring Day in February and received close to 60,000 applications, a notable increase from last year’s 40,000. This time around, the chain didn’t need as many workers, meaning restaurants could be more selective.

“Many of our team members grow up with the Applebee's brand,” Cywinski says. “They really do. It's part of the community, part of the neighborhood. Our brand positioning is familiar and inviting and welcoming and come as you are. We're not a pretentious brand. I think that applies to team members, as well. They find us to be a natural opportunity for employment, and we are visible. Our marketing is pretty cool and our music is fun and we make people hungry. So more than an attractive employer, and I think that's evident.”

All the pieces are coming together for a major growth turnaround, Cywinksi says. Any closures moving forward will be 1 percent attrition, and Applebee’s is in position to capture the opportunity of more than 100,000 restaurants closing throughout COVID.

The development team has cherrypicked and identified areas across the country that represent high AUV, and franchisees are aware of the same analytics. Applebee’s will come close to net unit growth in 2022, and plans to eclipse that barrier in 2023. After that, the number of openings will continue to escalate.

“2021 represents the culmination of our strategic brand optimization work over the past several years,” Cywinski says. “As expected, 2021 provides us the opportunity to really unlock Applebee's full potential, providing a glimpse as to what's possible moving forward. I'm proud of our team, and I'm very proud of our franchise partners. I mean, Applebee's is now exceeding, well-positioned to flourish on a sustained basis.”