Applebee's is on the Greatest Run in Company History

AUV has grown by more than $500,000 in the past five years, and the chain is closing fewer units than it has in a decade.

Applebee’s is in its “glory years,” says brand president John Cywinski. He argues the chain is in a better position now than it’s ever been across 42 years of history.

No one is likely to challenge him on that take. Same-store sales grew 3.8 percent in Q3 year-over-year and 16.9 percent against 2019—the best three-year sales performance in the history of Dine Brands, which formed in 2007. Average weekly sales per restaurant were $53,000, equating to $2.76 annualized AUV. When Cywinski began his tenure as brand president in 2017, AUV was at $2.2 million.

He lauds the team Applebee’s has built in the past few years. COO Kevin Carroll joined in June 2017 after years with Brinker International. CMO Joel Yashinsky, who had a long career at McDonald's, entered in January 2018. Jill Marchick, vice president of consumer insights and business analytics, came onboard in September 2021 with experience from McDonald’s, Starbucks, Aramark, and Hershey. Melissa Hariri, executive director of communications, has been with the brand since June 2016, and was promoted to her current position in March 2020. Duane Aldridge, vice president of IT, has been around since 2014, but similar to Hariri, was elevated to his current role under Cywinski's tenure. Most recently, Scott Rodriguez, with experience at Papa Johns and BJ's Restaurants, joined as chief culinary officer.

The U.S. footprint has been optimized as well. Applebee’s spent five years closing roughly 300 low-volume, nonviable restaurants. That strategy ended in 2021. This year, 15 stores are expected to shut down, representing the fewest closures in a decade. The portfolio—comprising 1,571 U.S. outlets—was refined to 31 well-capitalized franchise partners, many of whom have been a part of the brand for several years.

“The portfolio of franchisees is best-in-class, and the portfolio of restaurants is really healthy and vibrant as evidenced by that movement on average unit volumes,” Cywinski says. “You combine that with restaurant-level excellence and scale and world-class marketing, we are extraordinarily well-positioned, even in a tough environment. And it's not only evident in our Q3 results. It's been evident over the past several years here at Applebee's. We're just beginning.”

The executive says Applebee’s is continuing to lead the casual-dining industry in convenience, affordability, variety, and brand awareness. To elaborate on a couple of those points, off-premises exceeds $1 billion annually. It still mixes 24 percent, equally split between carside to-go and delivery. In terms of absolute dollars, average weekly off-premises sales per unit were $12,800 in the third quarter. Applebee’s recently opened its 10th drive-through pickup window, further demonstrating its commitment to sales outside the four walls.

As for the chain’s recognition in the marketplace, its unaided brand awareness attained an all-time high in Q3 thanks to value propositions, like all-you-can-eat boneless wings. The company has returned to 12-18 months of marketing lead time with contingencies and flexibility built in. This means the brand has a healthy portfolio of propositions it can market and deploy as needed, in case the economy becomes tougher and lower-income consumers become more cash-strapped.

Cywinski says the company will benefit from customers trading down from fine-dining concepts. He also acknowledged that some may likely trade out of Applebee’s and into quick service, but not as many as you may think. He points out that Applebee’s is on the lower end of the full-service average check spectrum and its customer demographics resemble fast-food and fast-casual players, with Gen Z, millennial, and Gen X accounting for 80 percent. 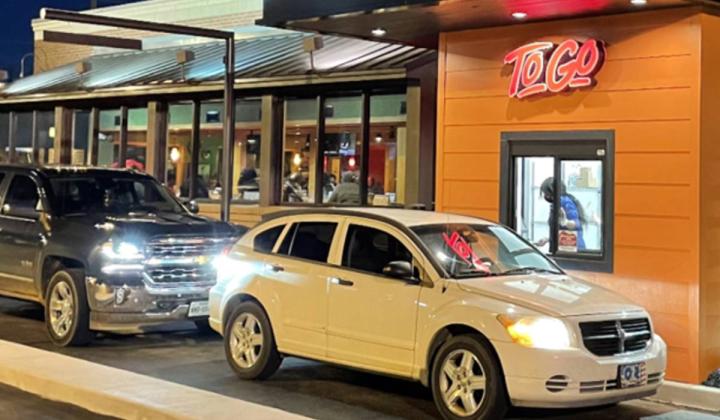 “We’re not a pretentious brand,” says John Cywinski, brand president of Applebee's. “We’re kind of like a good friend. That's how we like to talk about Applebee's, and that's how guests view us."

“We win on variety,” Cywinski says. “So there's no veto vote with the Applebee's brand, and we steamroll the competition when it comes to brand awareness, meaning we are far and away the category leader on brand awareness. It positions us very well moving forward. With that said, a recessionary environment is a tough environment for a guest with $77,000 average household income, and so we have to be very thoughtful and creative and always mindful of the fact that this guest has very modest discretionary income. And so we've got to earn that, and I believe it will be a challenging environment moving forward. It will not be easy, and we'll have to compete hard, and we do have many formidable competitors who I respect as well.”

The beauty of having only 31 franchise partners, Cywinski says, is that everyone is able to meet frequently and change course on short notice in reaction to the marketplace. The group of operators gives him more confidence and optimism than he’s ever had at Applebee’s, and that’s in the midst of a potential recession. The company recently held its annual conference in Beaver Creek, Colorado, where the brand not only framed its 2023 business plan, but also spent much time recognizing performance. Team Schostak Family Restaurants, an operator of 62 stores in Michigan, was named Franchisee of the Year.

“I now know what this team and these partners are capable of, and they genuinely love one another,” Cywinski says. “… We've got a lot to celebrate. With that said, it's a tough environment. Commodities are still at an all-time high and ‘23 will remain challenging. So brands have to be really great at what they do to thrive in this type of an environment. So we're very fortunate and thankful for those partnerships with our franchisees and for the team members that we have here. I wouldn't trade those two groups of folks out for anyone in this industry.”

On previous earnings calls, Cywinski said Applebee’s will return to U.S. new unit growth in 2023, but that prediction was flexed to either 2023 or 2024 during October’s call, likely because of the impending economic downturn. The brand president said the business environment in general, with its skyrocketing costs and supply chain delays, is worth rebuilding the new restaurant development pipeline, and that will take time. He’s confident, however, that net expansion will happen no later than 2024, through a combination of traditional outlets and ghost kitchens. Going forward, the closure rate will be roughly 1 percent, which is the historical norm.

Cywinski says Applebee’s classic “Eatin' Good in the Neighborhood” tagline has played particularly well during the pandemic. According to the brand president, customers find the positioning familiar, comfortable, welcoming, and inviting.

“We’re not a pretentious brand,” the executive says. “We’re kind of like a good friend. That's how we like to talk about Applebee's, and that's how guests view us. And we may not be the prettiest new building on the block. May not be the sexiest brand out there, but gosh, we're about as reliable as they come, and we think earning the trust of our guests throughout everything that we've been through together over the past two years is really important. Some brands have done that well, like Applebee's, and some haven't and that will be important to future success as well.”