Applebee's is Building a Brand of High Performers

The chain's string of closures is coming to an end.
May 2019 Danny Klein

Applebee’s turnaround over the past two years has had several layers. One of the most critical, and perhaps less-publicized points, though, involves fixing a stark gap. When Dine Brands reworked its leadership, the team was staring down a very wide discrepancy between effective stores and those brand-damaging units that not only dragged sales, but also poked holes in Applebee’s brand affinity. One of the strengths of a chain system, in theory, is consistency. The notion that customers can travel to any city or country, see a restaurant they’re familiar with, and have a dining experience they can trust.

That simply wasn’t happening at Applebee’s.

About a year and a half ago, president John Cywinski spoke about this variability and what it was doing to the chain’s performance. Fast forward and Applebee’s has, in effect, removed the bottom 10 percent of its system.

That three-year strategy of closing underperforming stores is winding down, Cywinski said Wednesday during a conference call. And it’s a key reason why Applebee’s is outperforming the casual-dining segment on several fronts.

For perspective, the brand shut the doors on just four stores in the first quarter of fiscal 2019, announced May 1. It expects 20–30 shutterings in 2019, mostly domestic. “This is very good news for the brand,” Cywinski said, “as we transition to a predictable closure rate of approximately 1 percent annually, beginning next year.”

Q1 was another solid period for the 1,830-unit chain (1,689 domestic). Same-store sales increased 1.8 percent, year-over-year, marking the sixth consecutive quarter of positive comps sales growth. It built off a comparable period of 3.3 percent from 2018, which drew a solid 5.1 percent two-year stack.

As the figures below show, Applebee’s has run it’s top-line figures up a rather impressive slope after living in the negative high-single digit realm for some time.

Cywinski said Q1’s results would have been better if not for a rough February sandwiched between a solid January and March. In addition to unfavorable weather, Applebee’s didn’t run an overt value proposition during the month, which hurt transactions. The chain promoted a 3-Course Meal for $11.99 in March and an All-You-Can Eat Riblets & Chicken Tenders (and shrimp this time) deal in January. 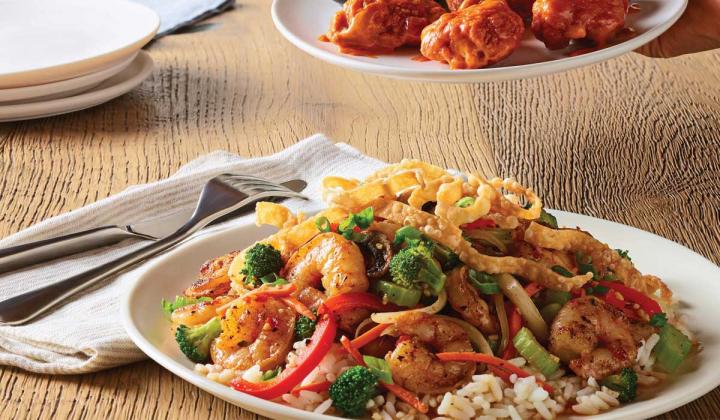 Applebee's February sales lagged a bit due to weather and the absence of a value-based deal, like the 3-Course Meal for $11.99.

According to TDn2K’s Black Box data, casual dining as a whole was lapping a negative 0.4 percent quarter. Applebee’s, as noted, was circling a 3.3 percent result—and it still outperformed the category by 115 basis points.

But arguably more notable than the comps performance is what’s unfolding in Applebee’s off-premises business.

Cywinski said, excluding Applebee’s, the category is growing at about a 15 percent rate. Applebee’s is tracking 40 percent, year-over-year, although that’s likely to slow down as it measures against similar 2018 expansion. At the close of Q1, off-premises accounted for 13 percent of total system sales and will likely exceed 20 percent of mix within the next two to three years, Cywinski said.

Currently, roughly 600 locations use a third-party call center for to-go orders. This has improved guest experience, average check, and order accuracy, he added. Guests aren’t rushed off the phone by busy workers. They’re receiving the full attention of employees instead of being one task of many for a frantic restaurant server, hostess, etc.

About 60–70 percent of Applebee’s total off-premises orders are now placed digitally or online, Cywinski said, as opposed to over the phone. That’s a significant change and lever for future sales. It helps in-store operations, prevents service bottlenecks, and shows Applebee’s exactly where the consumer is headed.

“The [casual-dining] category, among many categories, is currently experiencing a fundamental convenience-driven shift in off-premise demand, driven primarily by delivery and secondarily by to-go,” Cywinski said.

Since 2017, also per Black Box, casual-dining on-premises comp sales declined (a traffic shift seen by brands across all segments), while off-premises same-store sales grew at a double-digit rate, with delivery representing the primary engine.

This past December, to that point, TDn2K said to-go sales approached 9 percent for chain restaurants, year-over-year. To compare: to-go sales in comparable stores lifted less than 4 percent in each of the past two years. Meanwhile traffic declined 2 percent industry-wide this past quarter.

“This is true across [quick-service], fast-casual family dining and upscale dining, upscale-casual, as well as casual dining of course,” Cywinski said. “I expect this trend to continue until delivery penetration matures and stabilizes.”

Cywinski added that he expects the cost of third-party delivery to be passed along to the guest, “who will likely be willing to pay more for the convenience of delivery.”

It’s a necessity, he said, given the margin implications of third-party fees. Applebee’s ultimate objective is margin neutrality.

“The appeal of Applebee's has significantly improved, and our guests have a renewed attraction to the brand." — Stephen Joyce, Dine Brands CEO.

At present, Applebee’s has about 1,200 restaurants participating in some form of delivery, with 1,400–1,500 planned by year’s end. Included in this mix is Applebee’s “last-mile” delivery through its own website, as well as aggregator platforms.

“The appeal of Applebee's has significantly improved, and our guests have a renewed attraction to the brand,” Joyce said.

As a company, Dine Brands reported adjusted earnings per share of $1.90 compared to $1.11 for the same quarter in 2018. The 71 percent increase was primarily due to higher gross profit (23 percent thanks to the $13.5 million franchise-wide contribution made to Applebee’s national advertising fund in Q1 2018 not recurring). Also, Dine Brands buying and running 69 corporate Applebee’s, acquired last December, favorably impacted gross profit by $4.2 million, partially offset by about $1.4 million in foregone royalties. The company had revenue of $237 million.

On that company-run note, Cywinski said Applebee’s made great progress. They’ve retained 92 of 96 general managers and 100 percent of above-restaurant leadership in the transition.

As a brand, he added, NPD CREST metrics show Applebee’s recently hit an all-time high in guest satisfaction and value scores. “This is a big achievement for Applebee's and supported by significant improvements over the past year on brand affinity and recommend-to-a-friend, according to our internal brand tracker. In total these four attributes are meaningful differentiators and fundamental leading indicators of brand preference and loyalty, which is our ultimate objective,” he said.

Applebee's franchise fee revenue in the first quarter of 2019 increased by about 6 percent compared to the same quarter a year ago, CFO Thomas Song said, “primarily due to the improvement in collections as a direct result of a much healthier franchisee base.”