Another Broken Egg Revamps Itself Inside and Out

The breakfast concept is growing with ambitious goals set for 2020.
July 2019 Chloe Arrojado

For a long time, Another Broken Egg remained stagnant. Clay Carson, the brand’s VP of franchise sales and real estate, says people in the industry wondered why the concept didn’t grow. It had done well in tourist destinations, but after an initial expansion in 2008, Another Broken Egg hit the brakes.

Almost a decade later, the chain’s trajectory paints a very different picture from the past. It aims to become a household name, with plans to open 300 locations across the U.S. by 2025.

Carson says the company’s shift toward renewed expansion traces back to the restaurant’s move to Florida in the early 2000s, when customers in the tourism circuit wanted the cafe to have locations beyond holiday hotspots.

“I don't think the intention early on was to ever really franchise that much,” Carson says. “But because Destin is really a vacation spot for the Southeast … A lot of people came across the cafes in Destin, and in turn were interested in franchising the cafe.”

Another Broken Egg’s franchise program completely changed when the Beekman Group acquired the concept in 2017 and brought members of its executive team to revitalize the program. Carson says there was significant “pent up demand” that the company leveraged to debut the new growth model in July 2018.

Since then, the brand recruited nine franchisees to roll out 31 new locations throughout the nation. The franchisees, who range from ex-military to experienced industry professionals, found the cafe a lucrative way to diversify their portfolios.

The roughly 40 percent increase of Another Broken Egg since launching its franchise program brings the cafe’s total to 69 restaurants. Carson says the growth was further fueled by the brunch craze and one specific aspect of the trend⁠—the bar.

“The bar is no different than bars that you would see in a lot of dinner focused, casual dining places,” Carson says. “It's a little unusual, but it's been very, very effective.”

The bar feature is by no means a stranger to the brand. However, Another Broken Egg didn’t realize the bar had demand beyond the tourist demographic until it discovered a compelling result: increased visibility of the bar led to more sales. As a result, the cafe revamped its interior to showcase the bar as a prominent centerpiece of the restaurant.

Another Broken Egg’s “New South” design was unveiled at its two most recent openings in Auburn, Alabama, and Sugar Land, Texas. Carson describes the new look of Another Broken Egg as an upgrade from the dated interior of its past. He says the more open design not only makes the environment more fun, but also helps servers navigate the space more easily.

“The energy level is higher. It's a little bit more conducive to the younger demographic, certainly,” Carson says. 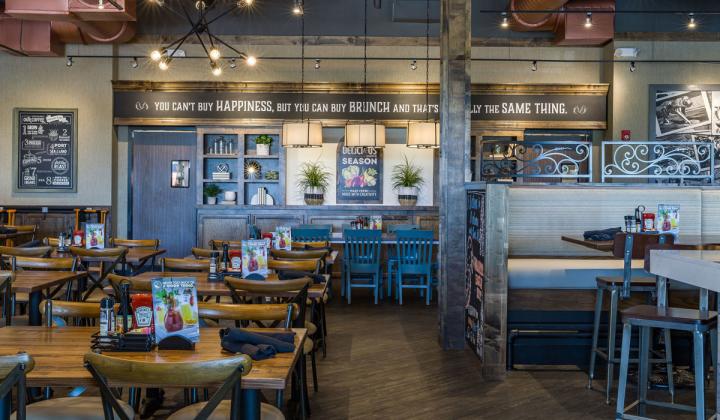 The addition of the bar as a more prominent fixture has impacted the menu, too. Carson says the Louisiana-focused menu goes hand in hand with many of the drink offerings, such as the Bloody Mary and Mimosa. Many of the limited-time offers are presented in pairs so new menu items have a suggested corresponding cocktail.

Carson says Jason Knoll, Another Broken Egg’s VP of culinary, is the “difference maker” in the menu’s creativity. Besides breakfast classics like pancakes and French toast, the cafe also offers New Orleans-style dishes like the Louisiana crawfish skillet and biscuit beignets.

Along with the breakfast sphere’s explosion, the technology boom also encouraged Another Broken Egg’s growth. Carson says the chain has garnered high marks on sites such as Yelp and with its net promoter scores.

“A barometer of anybody's success these days is Yelp. It's not so much what do you think of yourself but it's what your customers think of you,” Carson says.

Carson acknowledges processes like franchising rely less on a company’s branding and more about the people’s perception, thanks to technology. But even technology’s ability to spotlight Another Broken Egg’s value has its limit. Carson says the concept’s consistent growth will continue to be based on the timeless table experience.

“You can have great food, but if that level of customer service is not there … you're just not going to win the game,” Carson says.

The newly designed interior certainly changes the cafe’s customer experience. But Carson is hesitant to merit these changes as a “relaunch.” He says the concept is still in tune with its original Louisiana roots, and will continue to embrace successful markets. As the company expands beyond the Southeast, its suburban-driven market is an edge the chain will leverage in Middle America and the West Coast.

“I think it's just kind of staying true to school, finding your match in other markets,” Carson says. “It's basically identifying those markets across the U.S. that mimic or mirror the markets that historically we've done well in.”

Carson is sure that if the company continues to grow at its current rate, the goal of 300 restaurants nationwide will be reached well in advance of 2025. Carson says Another Broken Egg has prepared for its nationwide boom with added infrastructure—primarily operational staff—to handle growth. He says the strategy is all in the numbers.

“The more we expand those points around the U.S., the more that people are familiar with the brand, the quicker, faster, and more efficiently we grow,” Carson says.

At the same time, the company intends to enjoy the process.

“The franchisees are very happy. And our best sales people are happy franchisees,” Carson says. “It's always fun when you're in growth mode.”