Another Broken Egg expects to open 11 of 14 planned 2020 locations.

The emerging breakfast brand is ready to hit the accelerator again.

Headed into 2020, The NPD Group released a “Future of Morning” study that provided some weight to what many restaurateurs were reporting from the trenches. Last year, Americans consumed nearly 102 billion breakfasts, with another 50 billion morning snack occasions.

As McDonald’s CEO Chris Kempczinski referenced in January, breakfast was the only industry daypart growing traffic.

This was an even more pronounced reality in what full-service brands tend to label “polished casual breakfast”—a category that separates from fast-casual and quick-service competitors through a robust bar and brunch program, and the ability to serve experiences so many millennials and younger consumers crave.

And Another Broken Egg Cafe was right in the thick of it. The 1996-founded chain placed 14 openings on the calendar for 2020, which continued multi-year momentum. Another Broken Egg started to truly scale in 2008 before it hit the brakes. Then, the Beekman Group acquired the company in 2017 and debuted a fresh growth model the following July.

Within a year, Another Broken Egg recruited nine franchisees to roll out 31 locations, or a roughly 40 percent increase. And by the time 2020 arrived, there were 68 cafes nationwide.

We all know what came next, and how it barreled into the breakfast segment like a sledgehammer. Customers adopted stay-at-home behavior and started to work from home as COVID-19 uncertainty spread. Gone were morning routines and social gatherings—another full-service breakfast staple.

Yet like category peer First Watch, Another Broken Egg has begun to reemerge, with fresh revenue streams, tech stacks, and an outlook for growth that’s starting to accelerate again.

The agility and resiliency traces back to November 2019. Another Broken Egg announced a splash CEO hire, bringing on Paul Macaluso, a quick-service executive who grew up near Another Broken Egg’s Orlando corporate office. He most recently served as Krystal CEO and president of McAlister’s Deli before that. Earlier, Macaluso clocked 10 years at Taco Bell and held various brand strategy, menu development, and product marketing positions at Burger King and Sonic Drive-In. Macaluso then joined FOCUS Brands, where he started as VP of marketing at Moe’s Southwest Grill, and progressed into a position as SVP of brand marketing strategy, leading the collective efforts for the company’s six brands (McAlister’s, Auntie Anne’s, Carvel, Cinnabon, Moe’s, and Schlotzsky’s).

Macaluso’s counter-service background came into focus right as COVID struck. When he arrived, Macaluso brought up to-go and third-party delivery to management. Another Broken Egg wasn’t doing any of it. Breakfast food doesn’t travel all that well. Customers weren’t asking for it. And, most importantly, Another Broken Egg was growing without a dedicated off-premises strategy. “So why worry about paying those commissions and going through all that headache when the brand has been having positive growth, both from a traffic and sales standpoint, for years and years,” Macaluso says.

Naturally, Another Broken Egg had to challenge the long-standing belief once COVID dropped the curtain on dining rooms. Macaluso had been here before. At Krystal, in 2019, the company expanded its third-party delivery presence from 2 percent to more than 60 percent systemwide.

Another Broken Egg began by opening talks with franchisees. It instituted a royalty and ad fund abatement program. If restaurants stayed open, Another Broken Egg asked they “try some stuff with us,” Macaluso says. 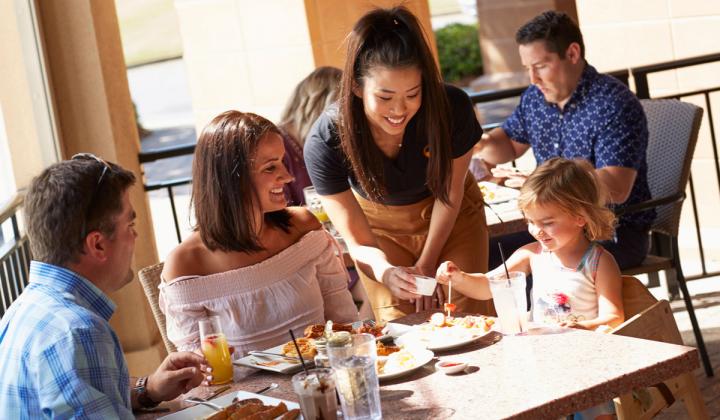 Corporate stores stayed operational, and within a week and a half, Another Broken Egg signed a deal with DoorDash. A few weeks later, UberEats. It then began working with Olo on online ordering. Macaluso dipped into his connections to fast track the process.

He says off-premises kept Another Broken Egg from fully shutting down. That doesn’t mean there wasn’t a bottom, though. At one point, it had five cafes open—four corporate and a lone franchise. But by the time 25 percent capacity options arose in markets, most opened within a matter of three to four weeks, Macaluso says. These operators returned to units ready for third-party delivery and online ordering.

Operators also tested other COVID lifelines, like meal kits, dinner, and groceries. The chain hosted a toilet paper promotion. “We were trying everything to just see what would stick,” Macaluso says.

Another Broken Egg reduced its menu from about 60 choices to 20. Only best-sellers. It was able to keep managers employed, as well as some hourly workers. Managers, in fact, were never laid off. Instead, Another Broken Egg shifted them into open stores. “And we started gaining some momentum,” Macaluso says.

Business outside the four walls at Another Broken Egg accounted for just 2–3 percent of sales pre-COVID. It’s now north of 20 percent. As units reopened—up to 100 percent capacity in 23 Florida cafes—the figure held steady.

In the last four weeks, Another Broken Egg’s overall same-store sales have tracked double-digit positive. “It’s been incredible,” Macaluso says of off-premises. “I think it would have taken years to build that part of our business to this level. If we had just launched it and put a little bit of meaning behind it, some people would have taken advantage of it. But obviously consumers were shifting in a big way.”

Off-premises bouncing fiercely off the bottom is hardly the only culprit. There were really two additional factors for Another Broken Egg. One is something that runs counter to early COVID trends, at least on the to-go and delivery side: people started drinking more.

Before coronavirus, Another Broken Egg reported between 10–12 percent of sales from alcohol mix. Today, it’s nearly double, which has skyrocketed average check and helped profitability. In response, Another Broken Egg doubled down on the bar and started to promote and develop creative, exclusive drinks. 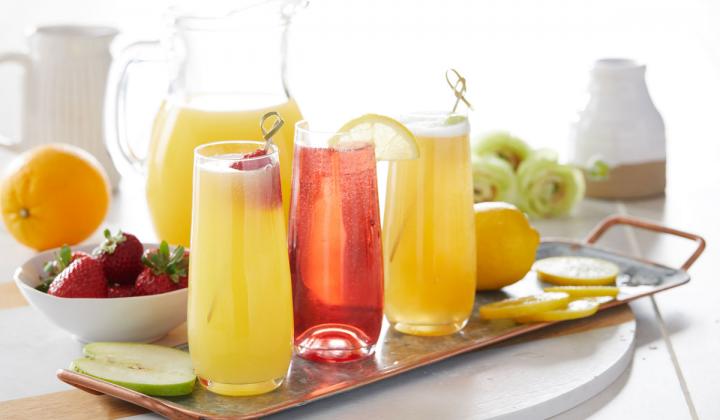 One byproduct of COVID behavior: More drinks during the week.

While the chain offered some alcohol to-go (where possible), like Bloody Mary and mimosa kits, complete with bottles of vodka and garnishes wrapped up, this has mostly been a dine-in phenomenon. It’s customers adding alcohol to meals when they finally decide to eat out.

Also, Another Broken Egg observed a spike in weekday traffic. For whatever reason, perhaps to celebrate snapping quarantine behavior, customers were drinking far more during the week than they were previously.

“Maybe people working from home and their schedule is a little bit more flexible. I don’t know,” Macaluso admits. “Maybe it’s the stress of life.”

Regardless, it’s flipped prior transaction trends. Macaluso credits the double-digit same-store sales leap to alcohol, off-premises growth, and the fact Another Broken Egg went from slow weekday business to more Monday through Friday covers than it’s ever seen.

Full-capacity restaurants (such as those in Florida) are closer to 75 percent when you consider what it takes to social distance a dining room and adjust the bar. In Another Broken Egg’s case, they’re grouping seats around the latter. Roughly 75–80 percent of the chain’s former usable seats are available inside. It’s full coverage on the patio.

In addition to hailing from a quick-service background, Macaluso brought marketing chops to Another Broken Egg’s CEO post. And those were needed, too. Previously, the brand focused digital advertising on brand awareness, from new products to core equities. With COVID stirring the stakes, Another Broken Egg had to shift, Macaluso says. It basically pivoted to a local-store marketing approach where corporate puled levers in three phases.

In phase two, with seating returning, corporate provided a fresh round of communication. When the full menu came back, another arrived. In all, this was a two- to four-week process depending on how fast the unit could reopen.

“So we basically had 70 cafes to micromanage through this process of phase one, two, and three, and handle their communication as almost 70 little brands so that we could promote them and make sure people knew everything from turning on, making sure their hours of operations were accurate on Google and Yelp, and all those sites,” Macaluso says.

“It was very time consuming but obviously super important,” he adds.

Alongside phases, Another Broken Egg sent franchisees tangible materials. New menus in one, hand sanitizer stands in the second, plastic ware, signage for tables, and so on. Then came picket signs for the front of stores.

It went down to the ground details. Managers in the past were told to park away from stores so customers could pull in. Now, they’re asked to park in front so it looks like business is happening. Akin to the herd effect you see when cars crowd a drive thru.

With social, Another Broken Egg instituted paid media and leveraged aggregators to reach out to their databases. It was also able to use its relationship with Yelp’s Waitlist platform to speak to that database. Generally, customers with reserved tables are asked to wait in their cars for a text. The same is true if people walk-in.

Another Broken Egg's "New South" design could be adjusted for post-COVID life.

Also ahead of COVID, Another Broken Egg was rolling a “New South” design that highlighted a larger bar with window access to on-patio dinners. The focus being to make it easier for guests to access cocktails and other drinks.

Macaluso says Another Broken Egg will continue to push here, leaning into a bar-forward design that now takes into account off-premises growth. A rearranged kitchen and more thought to organizational workflow. How do you setup a pickup area for guests walking in? Will there be a designated curbside element?

At McAlister’s, Macluso helped develop a pickup window design, which was essentially a drive thru without an interactive menuboard. He says they’ve considered that at Another Broken Egg, but it’s hard to say if it will make it. “We’re continuing to be open minded about it,” he says. “A window off the bar seems to make a lot of sense since we already have it. And that can be positioned as the right place for somebody to come up and not even have to come into the café. It’s a very logical extension of the design.”

Another Broken Egg is up to 73 locations in 13 states after opening in Columbia, South Carolina, in late September. The location was the first new restaurant to debut with online ordering and a dedicated to-go specialist position. By the end of 2020, Macaluso expects Another Broken Egg to get to 11 of its 14 planned openings, with the stragglers opening in the first quarter of next year.

Where the development hit really took place was on the pipeline side. But that’s started to pick up, Macaluso says. And a lot of the interest has flowed from multi-unit franchisees with deep restaurant backgrounds. The goal for 2021 is 20 openings.

Another Broken Egg sees the notion of a friendlier real estate market materializing as well. The company hired Jeff Sturgis, who worked with Macaluso at McAlister’s, as chief development officer in August. “We’re actually submitting LOIs right now, our franchisees are sending LOIs on second-generation spaces becoming open. That’s been happening in the last couple of weeks. We’ve seen three or four of them,” Macaluso says. “…For some brands, I do think it will be a time of accelerated growth and I think that will be the case for us.”