Another Broken Egg Cafe wants to have 300 locations by 2025.

The former Krystal head and McAlister's president takes over a growing franchise.

Former Krystal chief executive officer Paul Macaluso is taking the reins at Another Broken Egg Café, a 68-unit breakfast brand well entrenched in one of the fastest-growing sectors of full service.

Macaluso, who served as president of McAlister’s Deli before joining Krystal in April 2018, left the burger chain earlier in the month. He has 25-plus years of restaurant experience, working 10 at Taco Bell before holding various brand strategy, menu development, and product marketing positions at Burger King and Sonic Drive-In. Macaluso then joined FOCUS Brands, where he started as VP of marketing at Moe’s Southwest Grill, and progressed into a position as SVP of brand marketing strategy, leading the collective efforts for the company’s six brands (McAlister’s, Auntie Anne’s, Carvel, Cinnabon, Moe’s, and Schlotzsky’s). He was promoted to the president spot at McAlister’s in December 2016.

Another Broken Egg is run by The Beekman Group, which acquired it in late 2017 and has “dozens” of restaurants in development, the company said. “After a comprehensive nationwide search, during which we identified and evaluated a number of highly qualified candidates, Paul emerged as the clear choice to become our new president and chief executive officer,” Chris Artinian, managing director for The Beekman Group, said in a statement. “We are excited to work together with Paul and the other talented members of our executive team to continue our strong growth momentum from both existing cafes and new franchise development into the upcoming decade and beyond.”

“I have tremendous respect for the brand and our owners at The Beekman Group,”

Macaluso added in a statement. “I look forward to joining the passionate and talented executive team at Another Broken Egg Cafe, successfully collaborating with existing franchisees and continuing to leverage the strong new franchise growth momentum the brand has enjoyed for the past few years.”

Macaluso is a Florida State University grad. At Krystal, he helped return the legacy brand to franchise growth for the first time in 15 years. He also led a “scrape and rebuild” design program that generated year-over-year comp sales ranging form 29.8 to 107.5 percent for the periods each of the nine completed units have been opened.

Beekman said after its 2017 investment that it wanted to “build on the company’s legacy and accelerate growth.”

Beekman is a private-equity firm focused on restaurants and partnered with Artinian, a veteran executive who has served as president and CEO of Morton’s The Steakhouse, Smokey Bones Bar & Fire Grill and TooJay’s Deli-Bakery-Restaurant, to help direct the chain as president ahead of Macaluso’s hiring.

Another Broken Egg was founded as a franchising company in 2000. 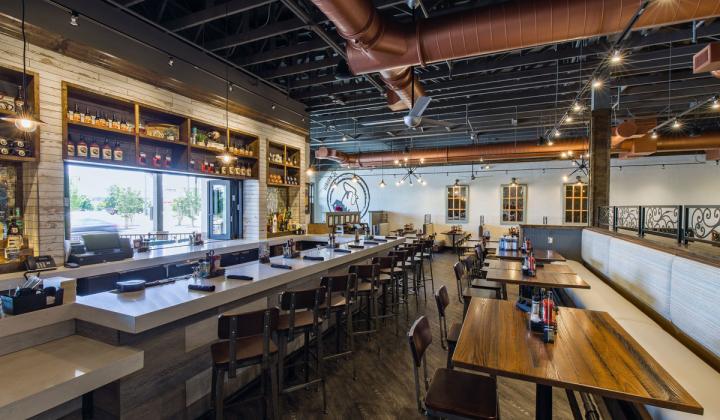 Another Broken Egg put the bar front and center in its new store design.

In July, Clay Carson, the brand’s VP of franchise sales and real estate, said Another Broken Egg was ready to kick up growth after stalling following its 2008 burst. He said it plans to have 300 U.S. locations across the U.S. by 2025.

Another Broken Egg’s franchise program completely changed when Beekman arrived and brought members of its executive team to revitalize the program. Carson told FSR there was significant “pent up demand” that the company leveraged to debut the new growth model in July 2018.

Since then, the brand recruited nine franchisees to roll out 31 new locations. The franchisees, who range from ex-military to experienced industry professionals, found the cafe a lucrative way to diversify their portfolios, the company said.

Another Broken Egg has grown about 40 percent since launching its franchise program.

A key differentiator has always been the bar, leading to a fresh “New South” design, which debuted at the brand’s two most recent openings in Auburn, Alabama, and Sugar Land, Texas. It showcases the feature as a prominent centerpiece. The modern design also includes additional seating and the opportunity to double a café’s bar seating by providing bar access to on-patio diners.