Value and operations are key to Red Robin's turnaround efforts.

She admitted the year was, in sum, “very disappointing.” And while the company identified and addressed serious operations issues in August, there wasn’t enough time to correct course before the calendar turned. Red Robin’s Q4 same-store sales dropped 4.5 percent as guest counts fell 4.4 percent. Average check was also down 0.1 percent. The company’s total revenues decreased 10.8 percent to $306.8 million (if you include the extra week in 2017 it was 3.7 percent). Adjusted earnings per share fell 45 percent, year-over-year to 43 cents, and Red Robin lost 82 cents per share on a GAAP basis.

For the full year, the chain’s traffic declined 1.5 percent.

This coming year is going to be an eventful one for Red Robin, both from a guest-facing perspective and internally. Issue No. 1: Dine-in traffic, which declined 4.2 percent in 2018. Post said the figure “clearly is not sustainable,” and it also undermines Red Robin’s off-premises growth (up 31.5 percent to 9.9 percent of total food and beverage sales). Red Robin simply can’t benefit from added off-premises business if it’s ceding four-wall occasions. It’s two sides of a rope pulling in different directions.

This issue flashed over the summer in one very concerning way. Red Robin’s walkaways increased some 85 percent, year-over-year, as total ticket times out of the kitchen upped about a minute on average. Wait times saw the same slowdown. Coupled together, it signaled a very real—and very sales-deflating—problem for Red Robin. Guests walked in, saw a crowded hallway, and walked out. Customer service scores dropped. Labor issues spiked thanks to added complexity in the hostess role. Red Robin was, operationally speaking, not adequately designed to handle elevated carryout business without hurting dine-in performance. In the past, hosting was traditionally an entry-level position intended to greet and seat guests. With to-go and third-party delivery orders tossed in, Red Robin’s model shifted. Guests were being asked to wait marginally longer and dine-in demand wasn’t being captured.

Here’s a look at where the brand has tracked in the past two years in regards to comp sales: 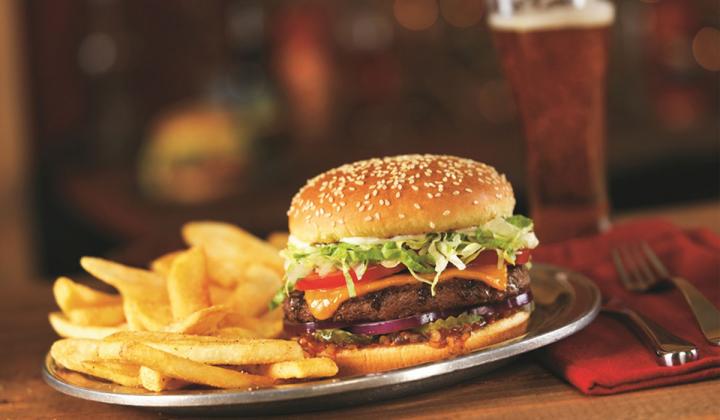 There’s also a real-estate issue at play. This past year, Red Robin saw the gap widen between enclosed mall units and freestanding units, raising the company’s need to reassess its portfolio. This could include closures “where they make sense,” Post said.

Lynn Schweinfurth, Red Robin’s new CFO, who arrived January from Fiesta Restaurant Group, said mall performance was down about 5.5 percent in the fourth quarter. That was a difference of about 3.6 percent for non-mall locations.

It’s progressed downward for three straight quarters, Post added. Earlier in the year it was fluctuating, but has now settled into troubling territory, which has Red Robin “looking with greater urgency at that element of our portfolio.”

Post said Red Robin also continues to seek buyers for regions it previously identified as refranchising priorities. In doing so, the brand engaged an outside firm to dial up the pace on certain markets, and to support the sale of any future regions it might refranchise. COO Guy Constant sees this opportunity for franchisees as picking up territories with development upside.

Red Robin is currently company heavy, with only 89 of its 573 units franchised.

Why value is everything

For most of the past five years, Red Robin’s value proposition relied on its Tavern Double platform. Priced at $6.99, the menu architecture drove traffic and led to an outperformance of peers in 2017. What happened over time, though, was Red Robin created a growing drag on per person average. In response, it dialed back the number available at $6.99 to just two burgers. Red Robin also raised the price of other Tavern Doubles.

Since, Tavern mix moderated from a high of 17 percent in Q3 to just over 14 percent this past quarter. And Red Robin expects to keep pushing the number downward as it puts greater emphasis on gourmet innovation. One example, the El Ranchero Burger, began advertising this week.

“If we do a better job with throughput and addressing wait time issues, there is traffic to capture." — Guy Constant, Red Robin COO.

The immediate change is a $10 bundle that’s being offered to just dine-in guests. Customers can order a gourmet burger, choice of bottomless side, and a bottomless beverage. By the percentages, it’s a pretty strong offer. If a guest ordered the El Ranchero Burger at $11.49 and added a $3 beverage, it would run $14.49 (bottomless fries are typically included). The deal is available all day.

Post said the bundle test drove incremental and profitable dine-in traffic. If it’s successful on a broader scale, Red Robin will add it to its national toolkit for Q2.

“We aren't doing any in-restaurant marketing of this, so the prospect of trade down has been limited, and what we're seeing is it is bringing guests in,” Post said.

Value, however, is about more than price, Post noted. Red Robin’s sweet spot remains middle-income families. Getting the message to them, and to new and lapsed guests, will be critical after a difficult year where some customers may have lost touch.

Red Robin expects, no later than the end of Q2, to launch a fresh campaign that will “return Red Robin to its unique place, among restaurant options, for our core targets,” Post said. The old message became “decidedly functional and a bit generic over the last two years,” she added.

The new campaign is fueled by fundamental research that looked into capturing differentiated value on a more meaningful level.

Additionally, Red Robin invested considerable resources to move its loyalty program to a new digital platform by mid-2019. When completed, the company will be able to precisely target offers based on recent purchase behavior, Post said. There are more than 8.6 million members in the platform.

A focus on operations

Constant said Red Robin saw improvements in the back-end of fiscal 2018. Sales performance accelerated as the quarter progressed, but so did “some of the service underpinnings to drive ongoing improvement as highlighted by some of the leading metrics.”

As the quarter moved along, Red Robin witnessed steady reductions in the number of walkaways, guest complaints tied to the time waiting to be seated, and issues related to table cleanliness—two areas the chain identified as needing improvement. “And even as weekly guest counts increased through the fourth quarter due to typical holiday seasonality, we were able to hold kitchen time steady, and we were able to slow the growth in year-over-year wait times,” he said.

“If we do a better job with throughput and addressing wait time issues, there is traffic to capture,” Constant added later. “The second piece is a little bit longer term, which is for those guests who may not have had a good experience in Q2 or Q3 when we weren't operating well. We'll take time to build up the trust that we can deliver on the promises of better execution and performance. That, I think, is the second wave of benefit we'll receive from operating on a more consistent and more elevated basis.”

Red Robin’s 2018 overall hourly labor productivity improved about 9 percent versus 2017 as well. Regardless of the progress, Constant said, there’s plenty of work to be done.

It breaks down by five categories:

Constant said Red Robin deserved some of the blame for these pillars slipping.

“In order to observe the significant change they experienced last year, the operators were sometimes forced to get creative to try and deliver on our promise to the guests,” he said. “By putting them in this position, we drifted away from the consistency and standards that are the hallmark of high-performing operations-driven organizations.”

On the training note, Constant said Red Robin isn’t looking to increase its investment; rather it wants to reprioritize current spend toward training on the basics of restaurant execution and the fundamentals of leadership. That includes training Red Robin’s host and off-premises specialist and managing the dynamic of multiple revenue streams at the front door. Also, reinforcing the new skill sets needed for servers and helping heart-of-house employees adapt to kitchen changes and new tasks.

“I understand that what I've laid out may not be groundbreaking or exciting, but it's these basics and fundamentals that will help us to reinforce the trust that our team members and guests have placed in Red Robin and will help us to build the reliable, predictable and sustainable business that we desire,” he said.

Off-premises, not to be forgotten

Red Robin has grown its off-premises business from 5.4 percent in 2016 to 9.9 percent in 2018. Post said the chain believes it can double again in the next three years.

By the third quarter, Red Robin will launch a new online ordering system that is far more intuitive than the current one, Post said. The goal being to increase the volume of online orders and improve conversion.

Red Robin also plans to invest in curbside service and explore new meal bundles that make it easier to feed a busy family.

The chain’s 2019 capital expenditures are expected to range between $50 million and $60 million, and includes facilities improvements and investments to support off-premises business.

“Technology, capital investments, include among other things, improving the experience and usage of our website for desktop and mobile online ordering and improving hardware and software back-office stability that we believe will lead to less downtime, lower system maintenance cost, higher guest and team member satisfaction and better results once in place,” Schweinfurth said.