A stack of IHOP pancakes: an American classic that is never going out of style, even after 60 years.

60 Years Later, IHOP Is Taking Pancakes to the People

IHOP is shaking things up in its 60th year. But at its core, the casual dining icon remains committed to the values that customers have come to expect.
February 2018 Danny Klein

Six decades of consumer reverence couldn’t hide the fact IHOP was falling into an advertising rut. The DineEquity brand was becoming wallpaper, as chief marketing officer Brad Haley puts it. “I always say: the biggest crime you can commit is to be invisible. And if you’re completely comfortable with the advertising that’s usually a sign that your brand is going to be invisible, because there’s nothing for people to recall or remember or be moved by.”

IHOP’s 60th anniversary year is about celebrating the breakfast leader’s past, but it’s also about “bringing the fun back to the brand that hasn’t been there for a long time,” Haley says. If you’ve seen the “Pancakes, Pancakes, Pancakes,” commercial with a pilot and his co-pilot going through their preflight safety check with pancakes on their minds, you’ve seen a small glimpse of what promises to be a watershed year for the more than 1,700-unit brand.

The segment was the official launch of a campaign directed by Droga5, a celebrated New York indie agency with a case full of trophies, including multiple Agency of the Year honors from Advertising Age and Adweek. IHOP picked the agency in November after a lengthy review process that included pitches from other top companies.

In addition, Haley himself brings fresh perspective to the legacy chain. He arrived in August after departing CKE Restaurants, the parent company of Hardee’s and Carl’s Jr. Haley joined CKE in 2000 as executive vice president of marketing at Hardee’s and added Carl’s Jr. four years later. In 2011, he was promoted to CMO by then-CEO Andy Puzder.

Like Droga5, Haley recognized IHOP’s potential immediately. It stacks up (literally) in one word: Pancakes.

“The way someone characterized it, which I thought was perfect, is if you ever run into somebody who tells you they don’t like pancakes, you look at them funny because it’s a pretty universally loved product,” Haley says. “And if there’s anyone in the world who could own it, it’s the International House of Pancakes.” 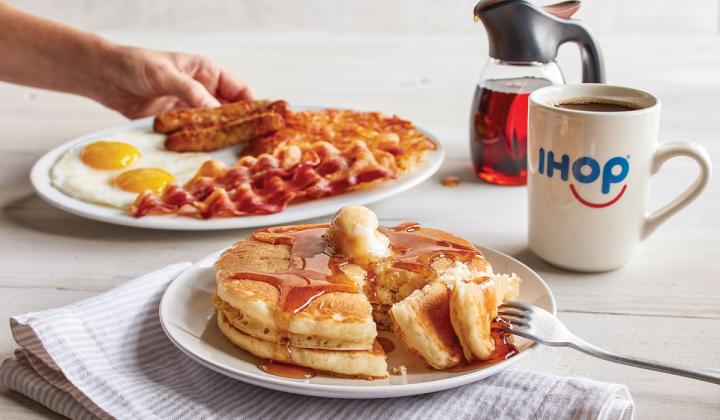 IHOP's to-go program took its time, but it's ready for mass appeal now thanks to a packaging system that keeps its breakfast favorites separate.

Fittingly, the new campaign launched alongside “All You Can Eat Pancakes” for $3.99. The “Pancakes, Pancakes, Pancakes,” series promises to be playful, quirky, and a bit outside the comfort zone for IHOP, which is exactly what Haley believes the chain needs.

As for what the next iteration looks like, Haley says, people will have to wait and see. However, regardless of whatever the exact changes and future promotions might be, they will celebrate an IHOP that is rapidly evolving while, at the same time, remaining true to its core—breakfast, family, and friendly service.

In the third quarter, IHOP posted same-store sales declines of 3.2 percent. But this came as multiple initiatives were being stretched out across the system. To start, IHOP’s franchisees remodeled 92 restaurants in the third quarter as part of an ongoing process that IHOP president Darren Rebelez said was on track to hit 300 stores for the second consecutive year in 2017.

A major area of growth for IHOP has taken form in the off-premises world. Haley says IHOP methodically developed the proper infrastructure—mainly packaging—before unveiling its to-go platform nationwide in mid-November. To-go comp sales growth was 8.3 percent in the third quarter compared to 7.1 percent the prior year, showing just how lengthy the runway really is.

The IHOP ‘N GO platform includes online ordering, a mobile app, and delivery in some markets. Haley says IHOP tested for almost a year, and introduced new packaging designed to support the needs of its Buttermilk Pancakes, along with other breakfast offerings, for guest carryout. The modular packaging provides ventilation to keep food warm while minimizing moisture, as well as section snaps and a specially designed box shape that keeps food safe during transport. In other terms, items like hash browns and sausages can be kept in one compartment, while pancakes are properly stored in another.

"We give people this incredible gift of happiness, and that’s all rolled into what we’re doing this year and with this campaign.” — Brad Haley, IHOP's chief marketing officer.

Haley says, as of the fourth quarter, IHOP’s system is nearly 100 percent onboarded with online ordering. This year will be a big one for delivery, too.

“We’re testing delivery platforms for rolling out in 2018. And again that’s a big opportunity for us,” he says. “There are not many brands in the breakfast space that are breakfast leaders that have taken advantage of delivery the way we are going to.”

Haley expects delivery to play a big role for IHOP customers during the week. When potential guests are heading to work or school, they can now incorporate IHOP into their routine. With the sit-down structure before, they couldn’t.

The company also revealed a Meals to Go Specialist Certification program to train store employees on all aspects of the carryout program in an effort to ensure all locations have at least one team member certified to ensure quality standards from plating to guest service.

“We didn’t just want to allow this process to move forward without being able to be sure we were giving people the best product we could,” Haley says. “We weren’t first to the game but we feel like the product and packaging we’re delivering now is the best in our space.”

As for the training and why the company invested substantial resources, Haley says it comes down to another signature IHOP trait.

“I think there might be a tendency in the restaurant industry to think if somebody is coming to your restaurant for a take-out order the interaction and the hospitality doesn’t have to be the same as if you’re in the restaurant,” he says. “But we don’t believe that at all. We want it to be as seamless, comfortable, and friendly for guests who pick up a bag and walk out the door as it is for somebody who is willing to spend the better part of an hour with us for a sit-down meal.” 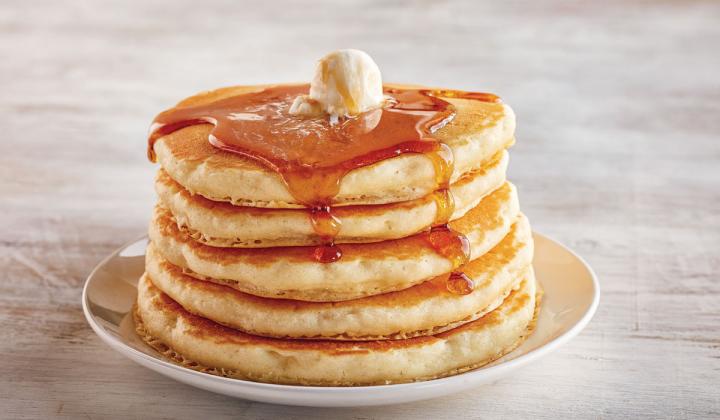 Haley says the training, which takes place in-person and via online modules, will be a moving and evolving target, because “the overall experience is still king.”

IHOP is growing at a solid rate. Franchisees opened 50 restaurants globally gross in the first nine months of 2017—a 108 percent increase over the same period in 2016. But like many casual dining brands across the industry, building traffic momentum remains a challenge.

Rebelez said during conference call after the third quarter that the “top priority at IHOP is to rebuild sales and traffic momentum by executing against a broad four-pronged strategy, which includes significantly enhancing the guest experience, running great restaurants, building and driving traffic, and being where the guest is.”

The digital enhancements, which also includes a revamped website, and remodeled stores are part of this. As is the advertising conversation and simply reinvigorating loyal diners.

That’s something that excites Haley, and he says Droga5 felt the same way.

“They were really excited about working on the IHOP brand because of the work they did. It confirmed the work we’ve done internally, which is that IHOP is a brand that has a lot of latent love out there. But that really hadn’t been reflected in the communications recently. Or at least not for a number of years,” Haley says. “That’s the kind of thing that makes an advertising agency get really excited.”

“The other thing is we have this credible brand strength,” Haley adds. “If you go to an IHOP for breakfast, or you just talk to people about their experience with IHOP, usually they get a smile on their face. Usually the first words out of their mouth is, ‘I love IHOP,’ when you tell them you’re associated with the brand. There are a lot of great memories there. We give people this incredible gift of happiness, and that’s all rolled into what we’re doing this year and with this campaign.”