The Lost Cajun had a watershed year in 2018. And it's not slowing down.

This growing franchise more than doubled its unit count in 2018.
December 2018 Danny Klein

Let’s turn the calendar back a few years. Raymond Griffin was lamenting the oft-told, always appreciated story of surviving those daunting early years of owning a restaurant. He had $35,000 and a dream to found a Cajun restaurant in Frisco, Colorado, a town 9,000 feet above sea level that averages 175 inches of snow a year. Griffin was a “babe in the woods,” he admits. There was a point during construction when Griffin was asked where he would put the hood vent in the tiny, 850-square-foot venue. “I said, ‘Well, there’s a door right there where I’m going to put a big fan,” Griffin told FSR back in 2017. “They started laughing and I looked at them and said, ‘What? I can get a bigger fan.’”

Some $100,000 later, Griffin was stirring pots of gumbo as hordes of skeptical diners lined up outside. Griffin likes to put the experience like this: People “come in there hoping to be happy but expecting to be disappointed.” But after they’re presented with a paddle of samples, everything changes. That’s the crux of this entire Lost Cajun story. The food speaks for itself. It fills in the gaps that Griffin didn’t know even existed when he landed, by chance, on this crazy venture in October of 2010. Griffin was vacationing to Durango, Colorado, when his late wife, Belinda’s, back gave out. They stopped in Frisco and Griffin, a former fishing lodge owner from Louisiana, got to work.

So let’s fast forward. Griffin called 2018 “an overwhelming year for us.”

In his typical, candid fashion he says The Lost Cajun is both excited and a little apprehensive for the next few years of growth.

“We are hiring quality people as fast as we can to make sure that we keep up with the needs of all of our great franchise family members,” he says.

In 2018, The Lost Cajun opened 13 stores, more than doubling its unit count to 25. It hit systemwide sales of about $17.5 million thanks to average-unit volumes of $1 million. Griffin says The Lost Cajun projects 2019 sales of $30 million. This run earned the chain FSR’s Breakout Brand of the Year honors for 2018—the first time we’ve awarded the title.

This number boggles Griffin’s mind. When asked if he ever thought this possible, he laughs but is relatively speechless—something not all that common for Griffin, who wakes up each morning and yells “I feel good!” before getting out of bed—an anecdote confirmed by his fiancée.

"When you sit down at a Lost Cajun, you better be ready to get friendly." — Raymond Griffin, The Lost Cajun's founder. 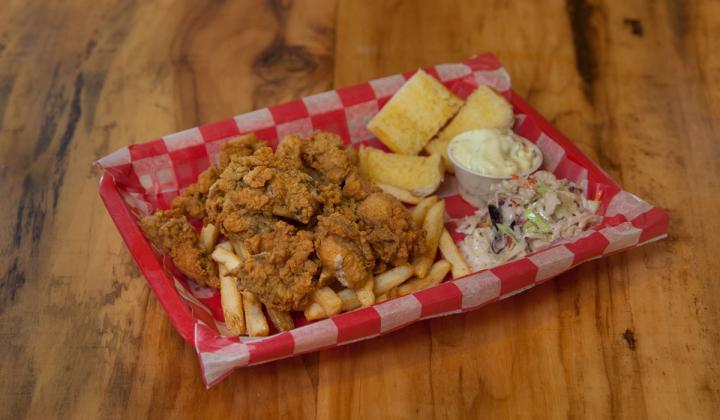 There's is nothing pretentious about The Lost Cajun.

Griffin was sitting on some growth announcements recently that he shared with FSR. Peter Turner, who owned and operated 12 Dunkin’s before deciding to sell out of the brand, discovered The Lost Cajun through Steve Galloway, another Dunkin’ franchisee. Galloway signed a six-store deal for Western North Carolina and is already looking into his second restaurant after getting the first under lease. Galloway told Turner about The Lost Cajun and Galloway decided he wanted to capture all of the North Carolina market left behind. He bought and paid for a 20-store deal, Griffin says. He plans two for 2019 then expects to open three to four per year until he does his complete buildout. Rob Dyer, who runs a Raleigh, North Carolina, store that just opened around Christmas, and is a former Chick-fil-A operator, inked a two-unit deal with the option for two more. His second is under contract and construction will start in the coming months.

Griffin might be surprised by the boom but there are clear reasons why The Lost Cajun is catching fire so quickly. For starters, the brand has the unique ability to open in conversions you wouldn’t expect for a full-service restaurant. The Raleigh unit is in an old Wendy’s. Turner’s first store was a Five Guys.

The restaurants aren’t big and they’re not overly capital intensive. The Lost Cajun asks a $35,000 franchisee fee with size criteria in the 1,500–3,000 square-foot range. They’ve been selling franchises since 2013 and developed interest organically. Griffin says the brand hasn’t advertised the opportunity. It’s been word of mouth and love at first bite.

The other thing is The Lost Cajun fits into what’s becoming a fresh and fast-coming wave in full service. It’s the opposite of stuffy. The average check is $40 per couple. Kids can take chalk and draw on the floor, and there are no partitions to separate booths. “When you sit down at a Lost Cajun, you better be ready to get friendly,” Griffin says. “It’s more than likely your neighbor’s kids are going to be crawling on the floor next to you. 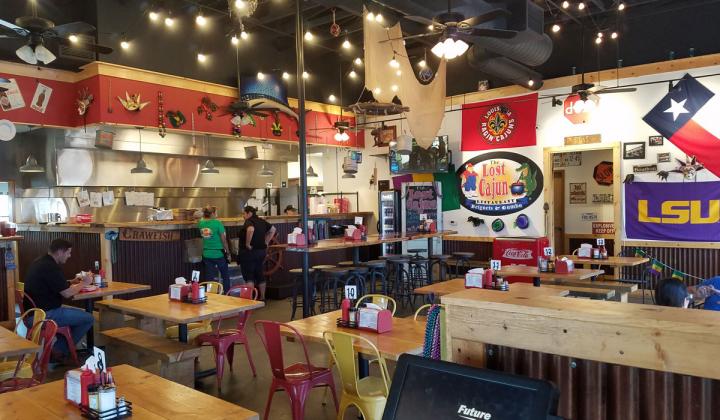 The Lost Cajun can open in all sorts of conversions, including former quick-service venues.

And then there’s the obvious draw: How many Cajun chains are there in full service? What about America in any sector? Some brands, naturally, serve Cajun staples, but which concepts are Cajun to the core and don’t run up the bill or take residence in New Orleans? Every town and city across the U.S. has a burger joint. A chicken restaurant. Somewhere that offers sandwiches. Gumbo? Crawfish étouffée? Mini beignets?

This is one of the reasons why The Lost Cajun is so popular in the markets it’s invaded to date. There are 11 in Texas; nine in Colorado; two in South Carolina; one in Tennessee; one in Louisiana; and one in North Carolina.

Take away the Louisiana spot and you can make the firm argument that The Lost Cajun is the only concept of its kind in each market it operates. The Slidell, Louisiana, restaurant, which opened this past summer, was a unique situation. Griffin was hesitant to plant his flag in Louisiana but was convinced by Keith Williams. Williams and Griffin were in the car business together some two decades ago, and he came across a story about The Lost Cajun that piqued his interest. He wanted to open one in the exact state Griffin placed an X through from the outset.

“I said Keith, listen, I will never, never open one in Louisiana. I don’t want the headline to be The Lost Cajun comes home … and gets his ass kicked,” Griffin says.

That has hardly been the case, Griffin says.

But from here on out, expect to see restaurants popping up in these other markets, although there’s no real limit on where it can go. That comes down more to the operator fit and whether or not Griffin feels like they can make it work—and keep the standards high.

A big part of that is the service.

“We are instituting online sales training and other systems to make sure that each new team member continues to share our culture of courtesy and respect with everyone,” he says. “As always in our stores please, thank you and you’re welcome are not just catch phrases but a part of our way of life.”

During a recent training exercise, Griffin pulls a server aside and asks what happens if you drop “an F-bomb in the kitchen.”

“You get fired,” the employee quickly responds.

It’s been a complicated deal getting to the point where Griffin’s dream can be a scalable reality.

“I’m in what I’ve now learned to understand is called the bleed,” Griffin says. “I thought, it was so funny, I thought once I got to 12–15 restaurants I’d be making a big pile of money. Well, that ain’t true.”

Griffin went and found The Lost Cajun’s first major hire—Richard Berns, chief operations officer. Berns’ began his career at Schlotzsky’s, where he helped grow the franchise to more than 100 locations in eight years. He then clocked time at Del Taco before spending 10-plus years at Tilted Kilt, expanding the concept from three to more than 100 restaurants. The Lost Cajun tapped a training lead from The Melting Pot.

Now, Griffin is working on how the chain is going to carry its intensive cooking practices across locations. The Lost Cajun has a commercial commissary kitchen in Denver where gumbo is being made Griffin’s way. It’s still a 4.5-hour process. It’s still cooked for 2 hours at the store level before being served. Currently, Griffin’s in the process of working on a Louisiana commissary to support growth.

Still, for each location Griffin will come down and make sure the process is flowing. A team flies down with the gumbo base from Colorado. Cooks will try to make the recipe and Griffin will leave the room. When he gets back they’ll put the Colorado, proven pot and the new one in front of him. Once it passes his test, the kitchen can proceed.

Griffin hired franchise business consultants to help out and is looking at automating some processes. But no matter what happens, he expects to remain heavily involved. It’s simply not his nature to let go.

“I’m going to do everything in my power as long as I’m breathing in and out to make absolutely certain that these people get it,” he says.