Sales have slid at Red Robin as restrictions increased in recent weeks, but reopenings are already on the rise.

Why Red Robin’s ‘Moments of Connection’ Will Endure After COVID

The brand is positioning itself to deliver a better guest experience than it ever has.

Red Robin’s 2018 call to eliminate bussers remains a cautionary tale. It was intended to save $8 million and soften labor pressure from rising wage rates across the country. Red Robin sliced two positions and added table-clearing duties to servers’ plates. It then asked hosts to handle not just dine-in guests, but carryout orders as well.

Red Robin quickly ignited a fix, putting staffing, especially at the general manager level, at the center of its comeback strategy.

And while CEO Paul Murphy believes these channels will remain elevated in a post-COVID-19 landscape, not just for Red Robin but for all restaurants, it isn’t quite the big picture. “… memorable moments of connection—that’s what the guest says the brand stands for,” Murphy said Monday at the ICR Conference, held virtually this year. “That’s why they use Red Robin. Basically, it’s why we exist.”

Red Robin’s current playbook has four main chapters. One, the fact it has structurally improved restaurant and enterprise level margins and expects 100 basis points of improvement during 2020. Secondly, the continued rollout of Donatos Pizza over the next two to three years. The product is currently in 79 restaurants and is expected to drive about $45,000 per restaurant in incremental gross margin by the second year. Red Robin plans to add 120 locations in 2021 and cover the full system by early 2023 (more on this later).

Next, the aforementioned off-premises expansion and where it eventually lands, which remains a tangible mystery. Although one thing appears certain: It will be higher than it was before. Something worth factoring, too, is Red Robin’s menu reduction. The company pared options down more than a third—something that led to better execution and more than $2 million in annual savings.

And lastly, an “old is new” concept that refers back to the August 2018 lesson, which Red Robin hasn’t lost sight of, even during an era defined by closed dining rooms.

So despite all the delivery, virtual, and curbside trends blanketing foodservice of late, it’s the dine-in future fueling Red Robin’s optimism on the other side.

Red Robin introduced handheld technology that allows servers to spend more time roaming dining rooms and less on side tasks, like ringing up orders and delivering food. The server inputs orders at the table as they come in from the guest. Meanwhile, a “server partner” works in tandem. An example of this Red Robin frequently sees, Murphy said, is as a server dials in an order, the server partner gets drinks ready. And then, in some instances, drinks arrive before the full order is even given.

“It’s something that we feel is really raising the level of hospitality and those moments of connection and friendliness at Red Robin,” Murphy said. “And we’re seeing it. We’re definitely seeing it in our satisfaction scores. … I don’t think that it’s by any means an accident that as we introduced the TGX model, the new service model, as dining rooms were reopening, that was at the same time we saw our satisfaction scores growing across the Red Robin brand.”

There’s another unlock in play, too. Murphy believes the system will ultimately help Red Robin appreciate higher-margin alcohol sales. It will open the ability to get that second beer or glass of wine to the table before the food arrives. Naturally, the majority of Red Robin’s alcohol is served at the table.

“The sooner that first drink gets there, and the person may have the ability to be two-thirds of the way through the drink, and that server is there and we have the ability to offer the second drink, we think we can influence over time the liquor percentage of the Red Robin brand,” Murphy said. 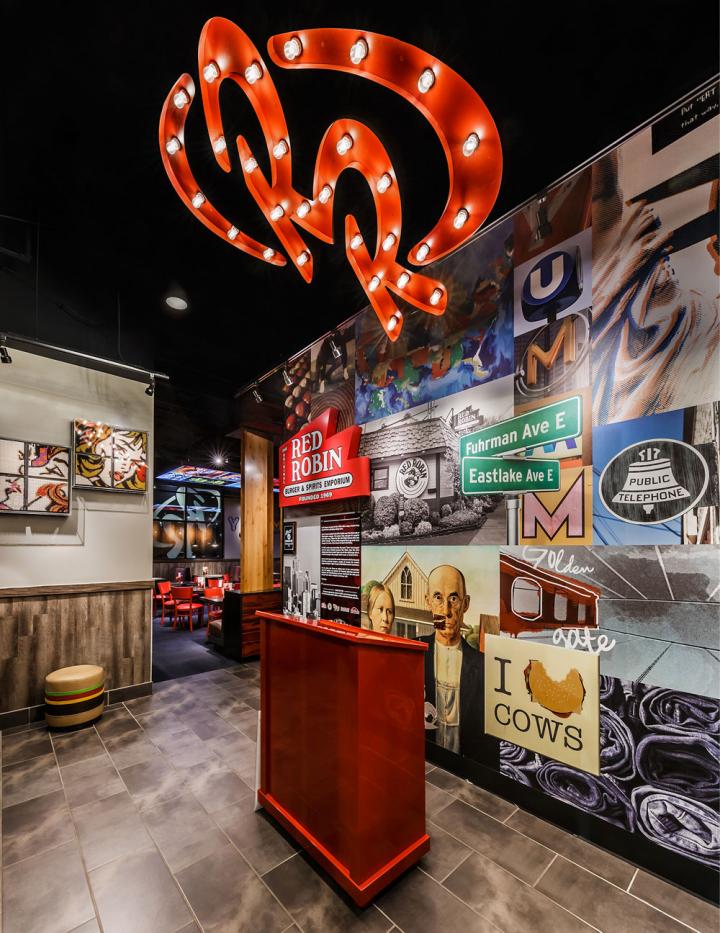 TGX energizes Red Robin because of where the company was a couple of years ago, he added, referencing the busser dilemma. It delivers great service, but also speeds up table turns and makes sure dining rooms are spotless. Servers can table check frequently and upsell throughout. A far cry from scrambling just to get tables cleaned and try to seat impatient customers.

“Obviously I’m passionate about it. I’m excited about it because I think it addresses a lot of the issues that maybe had been with the brand and over the previous couple of years due to some earlier decisions," Murphy said. "We’re addressing the needs of our guests and doing it in a way that actually makes it easier for our team members.”

Going forward, Murphy mentioned Red Robin’s milkshakes—one of the brand’s staples. Today, they come from the bar. Red Robin is looking at potentially moving them to the beverage or service area to make drink times on the alcohol side faster, and then even move shakes to pre-sets with hand-scooped ice cream. Murphy called this a “win-win from a quality standpoint on the milkshake side and a win on being able to get the alcoholic beverages to the table faster out of the service side of the bar.” Red Robin envisions this happening in 2021.

Like most restaurant chains, particularly those in full service, Red Robin’s momentum stalled recently due to heightened dine-in and other restrictions. The brand was hit hard across key states, like California, Colorado, Oregon, and Washington.

But just in the first 11 days of January, Red Robin got 39 restaurants back on line. The disruption, however, is showing up in the company’s performance.

Here’s a look at how sales are trending at restaurants with open indoor dining rooms. It paints a clear picture of where the recovery lies, and why TGX’s rollout and refinement provides potential for Red Robin:

Donatos has produced a significant lift at restaurants that feature it.

More on Donatos, prototypes, and the opportunity ahead

Two-thirds of Red Robin’s sales today are coming from Gen X, millennials, and centennials (10–23 years of age). What this signals to Murphy is whitespace after the COVID storm clears.

These customers, he said, will turn to restaurants for socialization and connection once they can. While that sentiment is widely held by operators—the so-called “pent-up demand”—how it unfolds could be more nuanced than simply turning a red light green and giving people what they couldn’t have before.

Murphy expects less capacity (fewer restaurants) following the shakeout. But there’s a specific development that bodes well for Red Robin and casual dining as a whole. “Even pre-pandemic, you were starting to see the millennial families gravitate toward suburbs,” he said. “You’ve been seeing a little bit more of a migration from urban to suburban. When you look at the landscape of casual diners, tend to be a bit more in the suburban areas than urban areas.”

The result will be less saturation and a demographic moving in where casual dining restaurants are. A chance to serve new users and inspire loyal ones, Murphy said. Again, this dynamic favors TGX and guest-facing improvements. When Red Robin greets a new generation of potential loyal guests, it wants to be ready.

One thing that’s going to be waiting is Donatos. The partnership between Red Robin and the 166-unit pizza chain began about two years ago with a phone call. Tests started at four Red Robins in the summer of 2019. On the heels of early success, Red Robin shared with investors in 2019 it planned to bring Donatos to 100 restaurants in 2020, then 150 each in 2021 and 2022. Yet COVID paused the process as Red Robin guarded capital. That changed in August. Before COVID, Red Robin had Donatos in 48 locations. It added 31 Seattle market units by November. And, as noted, 120 are planned for 2021.

Murphy says Donatos “really rounds out the menu for Red Robin.” About two-thirds of sales have taken place via delivery and carryout.

“We believe it’s a great product to help us remain strong and relevant in the off-premises business,” he said.

Restaurants with Donatos are outperforming other locations by 500–700 basis points. “That’s certainty a niece lift for any brand at the top line,” Murphy said.

Interestingly, Murphy said, Donatos is not cannibalizing burger sales. Guests are actually ordering pizzas as an appetizer when they dine-in. Donatos CEO Tom Krouse echoed that earlier in the year, saying customers were trying 10-inch options before meals, or eating and added one to take home.

Murphy said Donatos helped Red Robin kitchens as well. It’s the first position the company trains today because, “quite frankly, it’s one of the easiest.”

“I think people thought the addition of pizza was going to add complexity to the back of the house and the reality is it’s actually simplified the order process,” he said.

The product is cheaper from a food-cost perspective, but Red Robin does pay Donatos royalties. Those things offset, Schweinfurth said, in terms of what the company typically sees with costs.

Red Robin spends a bit to get the word out, and expects to do so in 2021 as the big rollout arrives. In the past, it’s even included free pizza in delivery orders to raise awareness. But in a landscape bursting with virtual brands and cloud operations, Murphy called Donatos “a semi ghost brand,” yet one that doesn’t lack for branding or Red Robin alignment.

“There have been some doubters about pizza out there [for Red Robin],” Murphy said. “But the results speak for themselves. It’s something that’s influencing top line, bottom line. There’s not a lot of things out there that give you the lift we’re seeing from pizza.”

Red Robin is also working on a prototype better served to meet its balancing business. Components to serve off-premises, while also keeping the focus on dine-in. This remains a work in progress, Murphy said, although one unit is planned to relocate with new features in 2021. Murphy thinks Red Robin could accelerate relocations in 2022 and 2023. The same is true of building new restaurants.

In the meantime, the company will continue to zero in on what it can control. It launched a new website in 2020 and has seen website traffic increase 20 percent. Messaging and advertising will further shift toward digital and social—where it’s primarily lived in COVID quarters—and Red Robin will push resources toward segmentation and targeting.

“I think in some ways the silver lining of the pandemic is it really forced an extreme focus for brands and I think we did a good prioritizing the focus items to ensure that we would be one of the brands that could thrive as we get to the backside of 2021,” Murphy said.