Outback Steakhouse has been a steady performer in recent quarters. But it's not showing up on the stock market.

Why is Outback Mulling Over a Sale?

Bloomin' Brands been pushed in this direction before.

Bloomin’ Brand’s decision to explore strategic alternatives, including a possible sale of the company, came down to a disconnect. What Outback’s parent is producing each quarter and the value of the organization just aren’t in sync.

In response, Bloomin’ retained BofA Securities as its financial adviser to start looking at other ways to maximize shareholder value. This is a relatively common turn of phrase deployed by public companies. As is the kicker there’s no guarantee anything might actually happen. Instead of a sale, the brand could acquire a brand. It could welcome a sizable investment, like Papa John’s did with Starboard Value LP in January. But, yes, it often results in a deal that sends a public chain back to the private sector, which has been a rather common occurrence in the restaurant space over the past two years.

Concerning just quick service for the first nine months of the year, per PitchBook, private-equity deal value in the space approached $5.35 billion. In all of 2012, it was just $3.17 billion. This after Inspire Brands, which took Buffalo Wild Wings off the market for $2.9 billion in November 2017, scooped up Jimmy John’s to make it the country’s fourth-largest restaurant company at 11,200-plus units and $14 billion in annual system sales.

Deno said Bloomin’ wouldn’t get into details about the strategic review, just that “we always look at the opportunity to improve shareholder value.”

“And so we're looking at all the different alternatives for our company, which potentially would include a sale of the company,” he said.

Bloomin’ has been a public company for eight years. Deno said they’ve hit earnings benchmarks 13 of the past 14 quarters, missing only when Hurricane Irma sank results. “We've got innovation in the company as we just talked about the DoorDash partnership. We've got margin expansion, we've got high-quality brands, we've got good cash flow. And we've got an international business that frankly is underappreciated [Brazil same-store sales rose 11 percent last quarter] … So given this persistent disconnect, we decided working with the board to step back and ask fundamental question, what's the best capital structure to go forward?” he said. “And so, we've used this opportunity to look at strategic alternatives. No, we're not responding to things. We're taking action here.”

Bloomin’ did not create a special committee to oversee the process, Deno added. “We just felt that, given where we’re at right now, the time is right to do it.”

What’s interesting about the timing, too, is that it comes just two months after activist investor Jana Partners, which owns more than 9 percent of Bloomin’s stock, started turning its company breakup gears again. 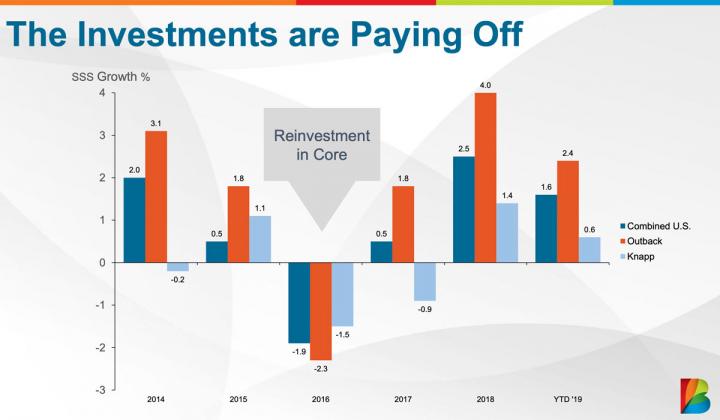 Bloomin’ operates 1,467 restaurants. Outback’s domestic footprint accounts for 727 of those, and international another 167. Jana has pushed Bloomin’ on multiple occasions to split into two organizations—one focused on Outback and another growth vehicle for smaller chains. Barrington Capital suggested a similar direction two years ago when it called for a spinoff of Bloomin’s non-Outback brands (Carrabba’s, Fleming’s, and Bonefish).

READ MORE: A deeper look at what Barrington thought was going wrong at Bloomin'.

Barrington, which had former investments in Darden and Lone Star Steakhouse and has since cut its position in Bloomin’ by more than 75 percent, said then that the company’s performance was hindered by the “complexity of its business structure.” It suggested operating four divergent brands negatively impacted Bloomin’ strategic focus and operating execution at each concept, “making it more difficult for them to compete with their nimbler competitors.”

One of the company’s biggest criticisms was Bloomin’s marketing spend, and how it wasn’t aligned with its revenue growth. That’s something the company has tackled in recent months through more targeted communications and less discounting. A media spend shift from mass marketing to mass personalization.

Bloomin’ responded by saying it was “making great progress in elevating the total customer experience.” And that’s where $450 million of investments show up. (more on this later).

But it still bears asking, as Barrington did, if splitting the company and operating Outback, which accounts for 52 percent of Bloomin’s $4.2 billion sales pie, independent of its sister concepts would hone focus further. “It is our belief that a more focused management team would perform substantially better and do a more effective job of enhancing the guest experience to improve customer loyalty and increase revenues,” Barrington wrote in the previous note.

Jana has influenced this kind of change previously. It took a $134 million stake in Jack in the Box, which sold Qdoba to Apollo Global Management for $305 million in cash. Jana also grabbed a stake in Whole Foods Market earlier in 2017. In that case, like Bloomin’, Jana nudged Whole Foods to explore strategic alternatives. Amazon soon spent $13.7 billion on the supermarket leader.

What does this all mean for Bloomin’, Outback, and its other brands? It’s hard to guess right now but the stock price hasn’t reflected a company investing heavy in innovation, and that’s really the issue at hand. 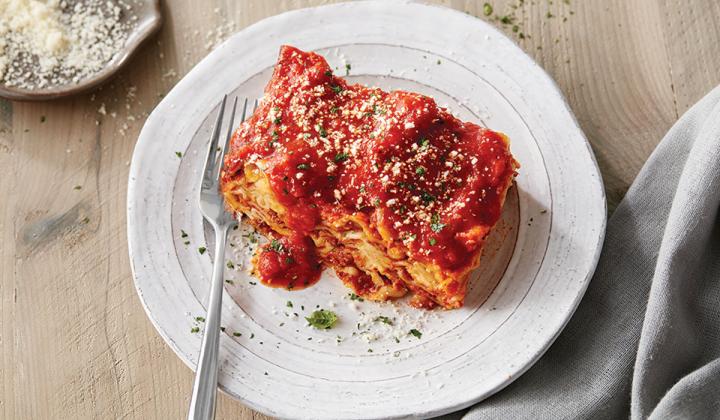 Would it make more sense for Bloomin' to operate as two companies, with one looking over its smaller brands, like Carrabba's?

As Bloomin’ noted in recent reviews, the company poured a lot of capital into the business over the past four years. It spent $50 million on food and service enhancements ($20 million of service training, $30 million food quality, portions, and reduced complexity) and another $400 million on remodels “to contemporize our brand and improve curb appeal,” Deno said.

Meanwhile, Bloomin’ was aggressively pulling three sales levers—off-premises expansion, loyalty, and international growth. Deno said the changes are, despite the stock price, providing results. Through October year to date, Bloomin’ has outperformed the casual-dining industry on sales and traffic by 100 and 130 basis points, respectively. The third quarter marked the fourth straight period of at least 60 basis points of adjusted operating margin expansion.

Since 2015, Bloomin’ returned more than $1.1 billion to shareholders in the form of dividends and share repurchases.

Let’s break some of that down.

Outback plans to remodel 300 additional restaurants in the next three years to support takeout. The company said 74 percent of its customers prefer direct delivery, which is something Outback has built out to join its DoorDash launch.

Delivery returns checks of $44 and is 70 percent incremental.

What makes that traffic note impressive is that Bloomin’ stayed ahead of its peers (mostly) despite internally moderating average guest check to strengthen relative value, which is something few brands are trying. In Q3, traffic outperformed the industry by 210 basis points, with average check rising a measly 80 basis points.

The theory there is that Bloomin’ won’t lose guests later when discounts and promotions pulse out, as it might if it were going deal heavy. The opposite will happen.

As competitors take price to boost check and guard top-line performance, Bloomin’ will be in a position of strength from a value perspective. The near-term effect, however, is a slowdown in traffic compared to what it might have gained through a more incentive-forward calendar. But the fact that hasn’t produced a major drop is a promising sign for Outback.

The chain, for instance, cut its discounting 11 percent in Q3 versus last year, and is down 17 percent year-to-date.

Yet the traffic line over the past two years isn’t that alarming:

Here’s a look at average check trends across Bloomin’ in Q3. It looks very different than what you see in most corners of the full-service industry.

“You’ll see continued healthy traffic growth as we continue to mitigate our discounting. And that allows us to be careful on price increases as we go forward in this value environment,” Deno said.

It's a conscious decision to pivot toward a more temperate pricing approach.

“Over time, as we reduce our reliance on pricing, it will further enhance our value equation relative to peers,” Deno said.

It's clear Outback has progressed ahead of Bloomin's other chains on a two-year stack.

In September, Outback announced a third-party partnership with DoorDash. Delivery through the aggregator is now live in more than 550 restaurants, Deno said.

What made this setup unique, in the casual-dining space especially, was that it complements Outback’s existing in-house delivery program it spent years building. Outback’s $400 million remodel program includes, in most cases, an expanded off-premises room for added order volumes.

Deno said in-house research shows the DoorDash customer is a different type of delivery guest, with distinct purchasing patterns. They come later in the day. Generate a smaller check.

And despite the rollout, Outback’s direct delivery sales have remained strong, “with little to no cannibalization. This future validates our omni-channel approach,” he said.

Deno said having the in-house program actually helped since it was embedded into their operating culture already. “We weren't starting from ground zero. That was really important as we rolled it out during September,” he said.