Burgers, wings, pizza, and beer define Bubba's 33. As do wall-to-wall TVs and Texas Roadhouse's signature dedication to quality and service.

Texas Roadhouse's Other Brand Has Arrived

There are some parallels forming between Texas Roadhouse and its spin-off concept, Bubba’s 33. Namely, an element of patience.

Given the company’s 40 consecutive quarters of sales growth—an almost unheard of run in this corner of the restaurant industry—it can be easy to forget that three of Texas Roadhouse’s first five locations failed. The reasons weren’t anything foreign to upstart concepts—site selection, consistency. Founder Kent Taylor, who hailed from Bennigan’s and KFC, had to feel out his new, entrepreneurial concept. The same was true of customers.

Texas Roadhouse originally opened in Clarksville, Indiana, then Cincinnati, Ohio; Sarasota and Clearwater, Florida. So, each location was pretty much on its own from an awareness standpoint.

Two things really kicked Texas Roadhouse forward into the 581-unit (553 domestic) brand it is today. Firstly, Taylor linked with George Lask in 1996 and built a prototype that opened in Louisville, Kentucky. Minus a bar remodel and some kitchen upgrades, Texas Roadhouse's current restaurants pretty much mirror the old look.

The second was less in Texas Roadhouse’s control—it simply took time for guests to learn about the chain. And once that gained momentum, Texas Roadhouse could open in similar or nearby markets and stack upon its own success.

CFO Tonya Robinson said Thursday afternoon during the company’s Q4 and full-year review that some Bubba’s appear to be “getting the legs underneath them in their communities.”

Currently, Texas Roadhouse runs 28 locations of its TV-laden sports concept that specializes in burgers, pizza, and wings. It identifies as “family dining meets garage bar,” and takes its branding from Taylor’s “Bubba” nickname. The first opened in May 2013 in Fayetteville, North Carolina. Like Texas Roadhouse, it didn’t cluster growth out of the gates; it opted instead to work its way across the map and see what each market revealed.

Q3 2019: Texas Roadhouse is staffing restaurants for the future

“We continue to talk about how do we build that brand awareness a bit faster, maybe in the newer restaurants to help them get there quicker. And a lot of it is we talk about just having patience,” Robinson said.

Yet one clear reality—akin to Texas Roadhouse’s early days as well—is emerging. The mature units are thriving once they get going. Texas Roadhouse counts 18 Bubba’s in its same-store sales base (restaurants open a full 18 months before the beginning of Q4). Those venues reported comps gains of 7.1 percent, year-over-year, for the full fiscal 2019 calendar, the company said. Adding lunch at five stores, a pilot that began at the start of the year, contributed 2 percent of the growth. Same-store sales climbed 8.8 percent in Q3.

A key upcoming change, though: Texas Roadhouse opened just three Bubba’s in 2019. It plans to bring as many as seven to market in 2020, which would represent a significant uptick. And it would also be a sizable slice of the 30 total company openings Texas Roadhouse has planned for its entire system.

To put it plainly, doing so would turn Bubba’s into a true growth vehicle for Texas Roadhouse.

Here’s a look at how Bubba’s footprint has progressed by total unit count at year’s end:

Former Texas Roadhouse president Scott Colosi, who retired in June, said earlier the company hoped 2021 would be the year Bubba’s kicked into gear. “We’re just trying to be patient and disciplined and not trying to grow faster than what we should,” he said in May. “And I can tell you, internally, everybody’s dying to grow the concept faster.”

Part of that was committing to opening restaurants closer together in successful markets, like Houston, Pasadena, Tampa, and Charlotte.

Taylor also admitted last quarter it was a misstep on the company’s part to not co-market some areas and show the two brands were related. In some lower-performing stores, Texas Roadhouse bought billboards to emphasize the connection. “And that was very beneficial,” Taylor said in Q3, adding they’d lean more into that strategy, when needed, moving forward.

Robinson added opening seven Bubba’s in 2020 will “definitely give us a lot of information.” Texas Roadhouse has already targeted more sites for 2021 than it has this year, but will let 2020’s openings dictate progress before any announcement is made.

An important part of Bubba’s potential comes on the margin side, too, and figuring out efficiencies that encourage sustainable growth. One thing Texas Roadhouse does not want to do, to Colosi’s point, is scale the concept too fast and fall into a footprint that needs retracting later on.

"I think it really starts with quality food,” CEO Kent Taylor says. “And ends with superior service. If you don’t nail those two aspects it really doesn’t matter.”

Texas Roadhouse, as a company, opened 31 restaurants (19 company steakhouses) and closed just two (both international franchises) in all of 2019. It had zero closures in fiscal 2018.

So, this isn’t a brand that tosses the growth dice.

Here’s the difference: The average capital investment for a Texas Roadhouse opened over the past three years was $5.2 million, $5.3 million, and $5 million, respectively. In 2019, the company expected the figure to rise to $5.5 million due to land purchases and related site improvement costs.

You can see crystal evidence, then, of how the company is still tweaking the brand.

Average-unit volumes at Texas Roadhouse rose 6.6 percent to $5.5 million in 2019 from $5.2 million. The brand does not share those figures for Bubba’s yet.

Perfecting Bubba’s store design and efficiency model will be an essential part of the learnings Robinson referenced for 2020. As will understanding ideal market demographics and why some openings do better than others.

However, once those things iron out, expect Texas Roadhouse to display another one of its core operating practices—finding what works and honing that to a fine point. Taylor has always been a proponent of sticking to what got you to the dance. For Texas Roadhouse, it’s service, quality, hospitality, and staffing. And the brand has guarded those traits fiercely over the years. Steaks cut in house. No lunch. Free bread and peanuts. No LTOs. Delivery.

A good example: Texas Roadhouse’s No. 1 selling item, its 6-ounce sirloin, has been the top-ticket draw since day one.

At Bubba’s, burgers, pizza, and wings are scratch made. And also similar to its sister concept, Bubba’s 33 skews value and doesn’t want to lose that differentiator. “I think it really starts with quality food,” Taylor said to FSR earlier. “And ends with superior service. If you don’t nail those two aspects it really doesn’t matter.” 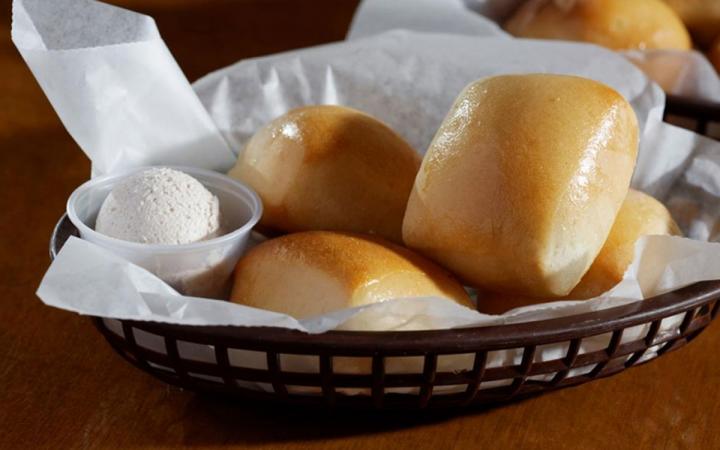 Texas Roadhouse’s stock soared to a new 52-week high early Friday morning thanks to a strong Q4. The brand earned 61 cents per share on revenue of $725.238 million, beating Wall Street expectations of 52 cents and $713.8 million, respectively.

Same-store sales bumped 4.4 percent at corporate units (484 of the brand’s stores are company run). The comp comprised of 1.5 percent higher traffic and a 2.9 percent uptick in average check. By month, comps rose 5.3 percent, 4.9 percent, and 3.5 percent for October, November, and December. Taylor added comps sales trended up 6.4 percent over the first seven weeks of 2020.

The brand also plans to relocate six older locations over the next 12 months. Texas Roadhouse has seen success doing so in the past as it targets bigger sites with more seating capacity, parking, and better lease terms. Of its 2020 expansion, the company said 25 percent will take place in small markets.

While Taylor said he still needs to talk to operators and see where things stand, he expects Texas Roadhouse to take a price increase somewhere between 0.5 and 1 percent this year, with higher amounts in restaurants impacted by state-mandated minimum and tip wage increases. An increase in that range would give Texas Roadhouse effective pricing of 2.5–3 percent for the full year.

Texas Roadhouse has fought its share of battles with labor costs over the past few reports. In Q4, labor as a percentage of total sales dropped 23 basis points to 33.1 percent. Labor dollars per store week hiked 5.4 percent, driven largely by wage and other inflation of about 4.2 percent and growth in hours of 0.6 percent. Robinson said if you take away the extra week, however, labor hour growth was essentially flat.

Robinson said the brand continues to approach the labor hurdle on a store-by-store basis. “It really isn’t one size fits all,” she said. “You could have stores that maybe they’ve determined by looking at their scheduling that they’ve got an extra person on a shift they don’t need or it could be a store looking and saying, hey, we could do a better job, clocking in and out and reducing the hours from that perspective. So it really just depends on the store and that’s the way we want it.”

Thanks to Texas Roadhouse’s managing partner program, operators benefit off their own bottom-line. This usually leads to them figuring it out sooner than later, Robinson said, and with an eye on long-term growth over short-term gains.

Robinson added 2020 promises to bring some familiar challenges to the table, given the tight labor market and low unemployment rates. “I think it’s going to be tough. So our operators are still going to be focused on making sure they’re staffing appropriately, that we’re doing the right thing from that standpoint as usual. And we’re going to be making sure we’ve got great talent in there because it’s definitely been a hurdle,” she said.