Sullivan's Steakhouse opened a 7,600-square-foot restaurant in Pittsburgh this fall, and will open another 9,100-square-foot store in Little Rock, Arkansas, early in Q1.

Same-store sales have doubled against 2019 for several consecutive months.

In the final months of 2020, the restaurant industry remained in economic turmoil.

Transactions at full-service restaurants declined 30 percent in December, year-over-year, according to The NPD Group, and in more restrictive states, transactions were down as much as 60–70 percent. At the time, the National Restaurant Association reported 110,000 restaurants permanently shut down or closed long-term and 83 percent of casual-dining operators expected sales to worsen in the next three months.

Those trajectories unfolded during a time when COVID cases numbered more than 200,000 per day and major markets like California began re-implementing stay-at-home orders.

Amid that strife, Nishant Machado, CEO and president of Sullivan’s Steakhouse parent Dividend Restaurant Group, envisioned “unprecedented growth opportunity.” As he and his leadership team watched the calendar flip to January, they were confident that stimulus, rollout of the vaccine, and pent-up consumer demand would translate to advantages.

It didn’t take long for Machado to be proven right. In March, 13-unit Sullivan’s began seeing significant, double-digit same-store sales growth compared to 2019, and that’s continued through the fall.

“Our focus was how do we make sure we meet expectations for the new guests that come into Sullivan’s that haven't previously visited, because maybe they had a different restaurant that they went to that is now out of business,” Machado says. “It was all about exceeding expectations of those guests, and when you fast forward from March all the way now through November, the fact that we've been able to consistently improve same-store sales growth over 2019 tells us that we've been able to win that consumer over with our experience, our service offering, and our quality product."

Sullivan's wasn't always an example of success, even prior to the pandemic. In the fall of 2018, Del Frisco's Restaurant Group agreed to sell Sullivan's to Romano's Macaroni Grill for roughly $32 million, leading to the formation of Dividend. Before that transaction, the chain's same-store sales fell 10.8 percent in Q4 2017, year-over-year, driven by a 15.5 percent drop in guest counts. In Q2 2018, the period before the deal was struck, comps plummeted 6 percent with an 11.1 percent decrease in customer counts.

Matters changed once Dividend took over. Machado became CEO of Macaroni Grill in 2017 to lift the chain out of bankruptcy, and he performed similar work when Sullivan's came onboard. After multiple years of comps declines, the steakhouse's sales lifted 4-5 percent in the first year under new ownership. There was also margin growth across every line item, including labor, ingredient costs, and operational expenses.

At the time, Machado attributed the turnaround in part to the addition of catering and off-premises programs, and those same levers helped the brand navigate the pandemic.

"When COVID hit, we were very well-positioned and ahead of the curve in being able to really turn that revenue channel on and add a little bit more juice to that revenue channel," Machado says. "The most interesting thing is that—and again, I think this is a testament to the product—post vaccinations and reopening, we've seen our off-premise sales stay pretty consistent. Not at where it was in the peaks of COVID, but where it was in Q4 of 2020. It's been pretty consistent in line with our Q4 results, while dine-in has continued to grow, which is why we're seeing the overall same-store sales growth that we're seeing."

Unit expansion appears just as fruitful. Sullivan’s has the ability to build from the ground up, but with so many restaurants closing, Machado says, “time is of the essence, and this is the time to accelerate growth and do so in an intelligent manner.” And by that he means creating more flexibility with second-generation conversions, which require less effort and minimize delays.

The first example of this came in Pittsburgh this fall. Sullivan’s transformed a space on the first floor of the U.S. Steel Tower into a 7,600-square-foot restaurant with a sculptural entry wall featuring a woven steel design, a large outdoor patio, three private dining rooms (The Champion Room, The Victor Room, and The Steel Gallery) inspired by the city’s sports teams, and private lockers for guests to store their favorite wine. 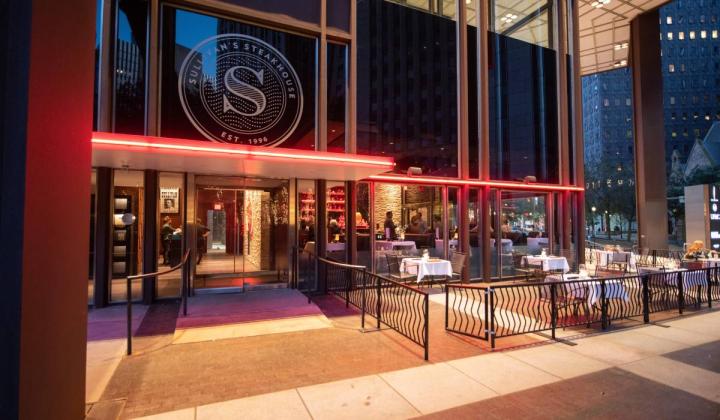 Three more restaurants are in the pipeline and slated to open in 2022 if deals can be struck with respective landlords.

Machado says supply chain didn't cause any disruption because the company is strategic and thoughtful about entering locations that need minimal infrastructural changes. Labor wasn’t a challenge either. The venue is run by Michael Rudman, a general manager and qualified corporate chef with 28 years of experience, and executive chef Paul Morrison, who’s been a part of the Chicago restaurant scene for the past two decades. The restaurant hired 115 workers among 700 applications, according to Trib Live.

Typically, there’s a four-month lead time when preparing for a Sullivan’s restaurant, including conversion, securing and training the team, and navigating the opening process.

“The one thing that we pride ourselves on is that in times like this, you got to be agile, you got be creative, and you've got to be able to lean on a strong platform, which is something this team has done consistently,” Machado says.

“We don't want to have to take something over and then be delayed, so when we look at new potential locations, we certainly keep that in mind and that was the case with Pittsburgh,” he continues. “Our focus with conversion at the Pittsburgh location was really on aesthetically making it look and feel like Sullivan’s as opposed to the previous steakhouse.”

Sullivan’s doesn’t expect any delays for its upcoming unit in Arkansas either, which is projected to debut in early 2022 at The Promenade at Chenal, an outdoor shopping center in Little Rock. The store will be 9,100 square feet, equipped with main and private dining areas, and a large indoor bar that sets the scene for live jazz music and a daily happy hour.

Three more restaurants are in the pipeline and slated to open in 2022 if deals can be struck with respective landlords. Machado says Sullivan’s began engaging brokers and searching for sites early into the first quarter, which put the steakhouse “a little bit ahead of the pack.”

“We had a firm believe that coming into ‘22, it was going to be an unprecedented opportunity. We were very well-positioned because of the platform that we have to capitalize on that,” Machado says. “But as you look at that pipeline, it is suddenly getting more difficult with more people now jumping on the bandwagon.”

Peers within the fine-dining segment have witnessed similar resurgences. For instance, upscale concepts under Darden Restaurants—The Capital Grille, Eddie V’s, and Seasons 52—earned $168.8 million during their Q1 (May 31 through August 29), good for a 24 percent increase year-over-year. Average weekly sales were $148,372, up from $131,757 two years ago, and profit was $33.5 million, growth from $20.3 million two years ago.

A year after Machado and his team foresaw success during bleak times, Sullivan’s is on pace for a record-breaking fourth quarter. The CEO notes that much of Sullivan’s comps growth has come despite softness of its special events business. But in recent months, reservations for holiday and office parties have risen, which should increase sales even further when combined with a steady off-premises business and gradual return of dine-in traffic.