To Manny Hilario, CEO of The ONE GROUP, there’s no denying guests are eager to escape to STK and Kona Grill’s vibe-dining experience.

He firmly believes his company is the leader in the category and “vastly superior” to the conventional high-end steakhouse and polished-casual environments. While all of that is qualitative and anecdotal, Hilario also has numbers to back up his confidence.

Kona Grill reported the same strength. In April, the 24-unit chain earned $97,000 in average weekly sales volumes. Year-to-date, the brand saw $88,000 in average weekly sales, or roughly 10 percent more than the AUVs at the time of acquisition in the fall of 2019. The restaurant is on track to meet The ONE Group’s goal of becoming a $5 million AUV brand. For Kona Grill, same-store sales grew 18.6 percent in April compared to two years ago.

READ MORE ABOUT THE ONE GROUP:

STK and Kona Grill Brace for a Dine-In Resurgence

Most importantly, The ONE Group achieved an almost 19 percent restaurant-level profit in the quarter, the highest in company history.

“Consumers more than ever as they become fully vaccinated are looking for a fun and differentiated social time outside of their homes and our concepts featuring vibe dining are well-positioned to deliver,” Hilario said during a conference call. “Our teams are effectively delivering on all operational marketing and culinary strategies. The results are truly remarkable and I couldn’t be prouder of our teams.”

Even with the stellar results, there’s remains opportunity to capture. All of it starts with average capacity, which was just 60 percent in March and 65 percent in April. But now, New York City recently removed all capacity restrictions and its midnight curfew. Las Vegas, another major market for The ONE Group, is scheduled to lift all restrictions June 1.

When capacity returns, that means restaurants will be able to maximize patio seating, something The ONE Group wanted to focus on prior to the pandemic. Right now, patios are difficult to access on Fridays, Saturdays, and Sundays—it’s one of the biggest complaints Hilario hears from Kona Grill guests. The CEO said that once people sit down and have drinks and food in the patio, it’s difficult to turn tables. But he knows that’s a high-class problem.

“We will have to define and really execute at table turns at the patio,” Hilario said. “So I’m super excited to see what happens this year, because hopefully this year there’ll be less limitation. So there’ll be an opportunity here for us to really see what the power of the patios should be. Looking at our AUV for Kona Grill at $100,000 in April, I would say that going into patio season in May, June, July, August, and September, we have a tremendous opportunity to really make lots of revenues out of the patios.” 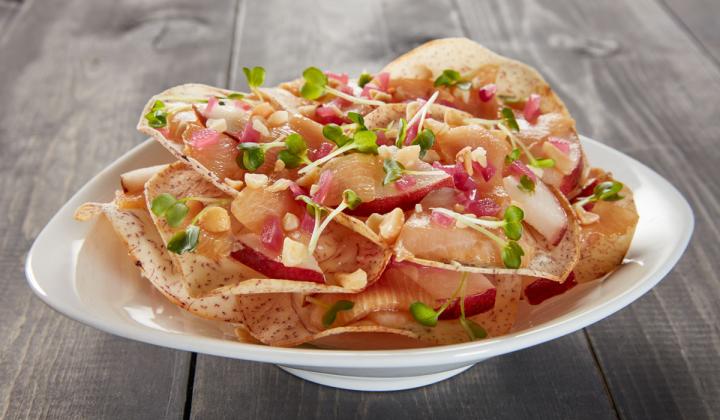 “And I think as capacity keeps coming on, I think we'll continue to see us building into what I think are pretty impressive AUVs. STK is about 260 a week and Kona Grill is in the 100s and starting to pick up,” said The ONE Group CEO Manny Hilario. “So I feel very good about how the units are executing all these programs that we put in place.”

At STK, the momentum of date nights and social events have more than replaced the business traveler and corporate private events, but that business is expected to return in an incremental fashion for Monday through Wednesday, and possibly Thursday.

“And frankly, the phones are now starting to ring,” Hilario said. “I think as vaccines get out into the public eye, we see almost a direct connection and correlation for group events as vaccination levels go up. So I guess we feel very good about where we stand right now."

“And I think as capacity keeps coming on, I think we'll continue to see us building into what I think are pretty impressive AUVs, in STK is about 260 a week and Kona Grill is in the 100s and starting to pick up,” he continued. “So I feel very good about how the units are executing all these programs that we put in place.”

A growing sales driver for The ONE Group is off-premises, a channel that accounted for 30 percent of sales in Q1, or a 155 percent increase year-over-year. Hilario attributed the success to investments in state-of-the-art technology and execution of operations and marketing initiatives, which enabled curbside pickup and delivery from nine separate partners. Although The ONE Group is in the early stages of delivery, it has found that more than 50 percent of transactions are from new customers.

Another significant lever is the new brunch program. The daypart has helped shoulder high demand on Saturdays and Sundays amid capacity restrictions. Hilario sees much potential in the business, and believes that as more people experience it, STK and Kona Grill will receive more repeat business. The brunch program features food items like the Lobster & Eggs Benedict and beverages like the bottomless mimosas. The ONE Group has found the program to be a natural fit for holidays, as seen by the sales success during Easter and Mother’s Day.

Hilaro said the digital marketing team has been aggressive in terms of creating impressions around the new daypart.

“I see that as a very attractive new layer of business because historically nothing happened really in our STKs between 10 a.m. and 4 o'clock on Saturday and Sunday. So that's a huge amount of captured capacity now that we can turn into revenues,” Hilario said. “ … And by the way, we've done brunch with vibe in mind. So it's not just coming in and getting brunch food, but you will see the DJs in our locations. You'll see a lot more energy and a lot more emphasis in making sure that we have a killer drink program that really complements what I believe to be an amazing food offering for brunch.”

Regarding unit development, an STK restaurant opened in Scottsdale, Arizona, in early January, and is averaging $190,000 in weekly sales. On May 1, STK opened its first airport location in Mexico. In the first full week of sales, the location earned roughly $150,000 despite opening during off-peak season. Three more STK stores and four managed F&B venues are under construction. Between 2021 and 2022, The ONE Group plans to open 13 new stores, including eight STK locations and five F&B venues.

In Q1 total revenues increased 24 percent to $50.5 million. Net income was slightly positive, or $0 net income per share, compared to a net loss of $4.6 million or $0.16 net loss per share. Adjusted EBITDA increased 312 percent to $6.5 million.

How Emerging Franchises Weathered the COVID-19 Storm
Huddle House to Open in Jonesboro, Arkansas
On the Border Signs Deals to Open Stores in Alaska and Texas