Through April 25, California, Florida, and Texas, saw comps grow by 8 percent, 20 percent, and 40 percent, respectively, compared to 2019, despite an average capacity of 50 percent.

Ruth’s Chris Steak House CEO Cheryl Henry said in early March there appeared to be a light at the end of the tunnel.

Nearly everything that’s occurred since has proven Henry’s crystal ball to be right. As of April 30, 74 of Ruth’s 76 company-owned stores were offering limited indoor dining, including 11 of 12 California-based units. Additionally, 66 of Ruth’s 72 franchise stores had available dining rooms. Quarter-to-date through April 25, company-run same-store sales increased 2.7 percent compared to 2019. Average weekly sales were $101,000 for the three weeks after Easter, compared to $94,806 in March.

It’s a pretty bright light, to say the least.

“There is no doubt in my mind that the demand for the experience we provide is alive and well,” Henry said during Ruth’s Q1 earnings call. “People are yearning to get together and celebrate birthdays, anniversaries, and graduations safely in groups shoulder to shoulder. It may take a few more months to get there, but it is happening.”

Like most restaurants, Ruth’s is seeing pockets of strengths and weaknesses across its portfolio. Henry mentioned New York and Hawaii—markets that post historically higher AUVs—as the two largest drags. Manhattan is moving in a positive direction and will remove capacity restrictions May 19, but it still remains closed for the most part. Hawaii is still pressured by the lack of international tourism. Seven stores across Manhattan, Hawaii, and Boston lowered systemwide average weekly sales by $3,000 during April.

But in other large, populated markets, the recovery is coming on strong. Through April 25, California, Florida, and Texas, saw comps grow by 8 percent, 20 percent, and 40 percent, respectively, compared to 2019, despite an average capacity of 50 percent.

“What they've been able to do is expand the number of turns we're getting in the restaurants,” said Henry explaining how restaurants overcame capacity restrictions. “So some of that is a partnership with the guests. They're willing to come a little bit earlier and dine a little bit later. We've seen that trend continue as we open. The other piece is really around how we staff and move people through the restaurant, utilizing the private dining space."

The even better news? There are more sales to unlock in these markets. For example, group and business occasions are still soft, but are forecasted to come back in the latter half of 2021. The other opportunity is growing capacity, Henry said. It’s been quite a moving target because of the variables associated with free-standing tables, booths, and what constitutes 6 feet apart. The majority of jurisdictions in Florida have required social distancing, but the state recently announced that local municipalities can’t have their own requirements around spacing.

“I think you're going to start to see more and more of that as we work our way through Q2 and into Q3 from different states as well as local municipalities and counties and so forth,” Henry said. 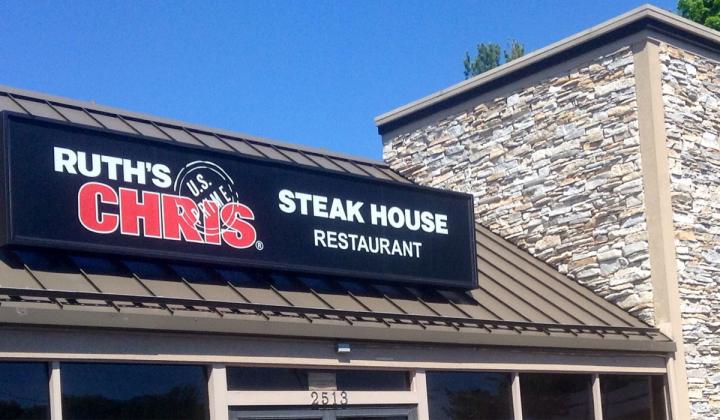 Off-premises accounted for 12 percent of average weekly sales in Q1, or about $10,000 per week.

Henry said that since the beginning of COVID, Ruth’s has worked with one foot in managing pandemic operations and one foot in the future. But with vaccinations increasing, restrictions lifting, and sales rising, the fine-dining chain is now in an offensive position. That means a greater focus on future planning and strategic investments.

As a part of this, Ruth’s will continue to use technology to reduce friction and enhance the guest experience. Off-premises accounted for 12 percent of average weekly sales in Q1, or about $10,000 per week. Henry expects this to land between 5 and 7 percent as dine-in returns, which is still far greater than the 1 to 2 percent mix prior to the pandemic. Throughout COVID, the chain has worked vigorously to mix its high-hospitality, high-touch experience with consumer’s demand for convenience. Henry said the key is just being authentic.

“So it's not necessarily about the things you might see in putting technology directly into the guest hands as they're in the restaurant,” Henry said. “But more about using data and knowing the guests and making sure they understand that we understand them and their needs. And we believe that's where some of the opportunity is. The other piece is really behind the scenes. It's how we enable the team members to use technology, new programs, new processes to really be efficient and productive at what they're doing.”

“So when we talk about data and digital, it's really kind of this tiered approach from enhanced guest experience, removing friction, as well as making sure we have sustainability in our workforce who wants to work in different ways with new information and to be more effective and productive in doing it,” she continued.

Ruth’s proactive mindset is also fueling development. In May, the chain amended its existing credit agreement, allowing it to increase growth capital expenditures by $15 million to $20 million. The boosted funds will further accelerate unit growth, with two to three new company-run stores expected by the end of the year. Another three to four corporate stores and two franchise units are anticipated for 2022.

“We had growth in the pipeline when COVID hit,” Henry said. “So some of this is seeing those units through. We spent some time looking at the marketplace where these units were and working with the landlords, and we have confidence that these locations are valid moving forward. And what's been indicated, as we mentioned, as markets have reopened, is that the demand for the experience that Ruth's expertly has provided for 55 years is in high demand. And so we have a great level of confidence of bringing this pipeline to fruition.”