For July, comp sales were up about 17 percent versus two years ago.

In leading markets, same-store sales are growing as much as 46 percent versus pre-COVID.

As a destination for large, dine-in special occasions, Ruth’s Hospitality Group did not have an easy time navigating the pandemic. But as dining restrictions lifted and consumers became more comfortable eating out, Ruth’s Chris saw consumers race back to a place where they could celebrate, said CEO Cheryl Henry.

Both franchise and company-owned restaurants experienced a resurgence in consumer interest. Comparable franchise restaurant sales increased 200.9 percent from 2020 and 7.5 percent from 2019. On the corporate side, same-store sales jumped 17.5 percent compared to 2019. Altogether, Ruth’s Chris comps grew 5 percent. The brand’s momentum continued into Q3. For July, comp sales were up about 17 percent versus two years ago.

The number of celebrations after surviving a pandemic year led not only to spiking sales, but also rising average check.

“There's this pent-up celebratory occasion that people feel like this has been something they're missing,” Henry said during the Q2 earnings call. “They've known Ruth's. It hasn't necessarily been in their lives during the pandemic. So, when they're coming in, they're making that decision to truly celebrate and build check.”

Consumers are ordering more appetizers, salads, and desserts in addition to the larger entrees they are already purchasing. The average check was $87.85 for the quarter, up roughly $5.

Because of the experiential dining Ruth’s Chris is known for, the brand didn’t receive a huge boost to off-premises sales as much as other full-service restaurants during the pandemic. This quarter, Ruth’s Chris retained between an 8-10 percent off-premises mix and expects the number to dwindle to between 5-7 percent.

“As we think about more people, especially through Q2, being willing to come out, they want to experience the hospitality, the person-to-person relationship that we have with them inside the restaurants,” Henry said, adding the 5-7 percent is much larger than pre-pandemic numbers.

Still, Ruth’s Chris gained the most first-time customers in its Ruth’s Anywhere takeout program. These first-time users tend to be younger, more affluent consumers, and they continue to be an area of opportunity for the steakhouse brand moving forward.

“We are ensuring we're building a relationship with them, staying in touch with them,” Henry said. “And our ultimate goal is to take that first-time guest in that one experience and translate it to a lifetime of usage.”

Not every market recovered from the coronavirus at the same rate, as projected by Ruth’s Chris sales numbers. Boston, Hawaii, and Manhattan struggled to bring in the sales they once did as international travel remains low. With Boston, Hawaii, and Manhattan left out, Ruth’s Chris comp restaurant sales increased 11.1 percent in Q2 compared to 2019. These stores make up roughly 8 percent of unit count and historically contribute 10 percent of company-owned sales in a normal environment.

“Pre-COVID you weren't considering things about who is locked down when and which restrictions lasted longer, and all of that has an impact across the system and the footprint,” Henry said. 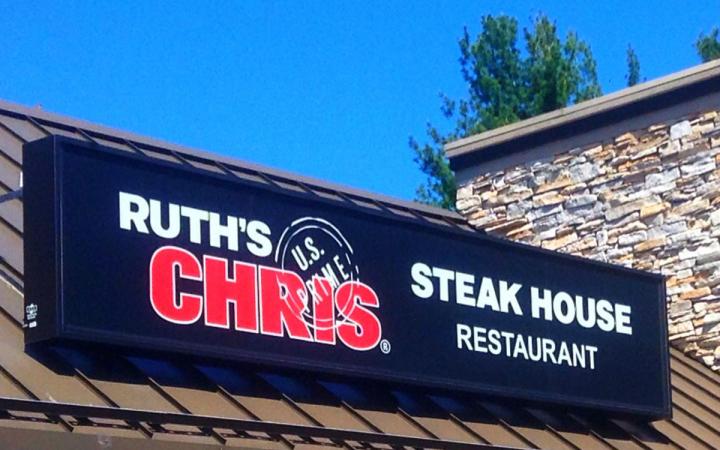 “We are keenly aware that the external environment remains uncertain in the short-term and that inflationary pressures are challenging,” Henry said. “We are confident, however, that with the accelerated demand for our legendary experience, the trust our guests have in our brands, and our team's ability to manage the business, we will weather any near-term impacts and remain committed to investing in the long-term future of our business.”

Ruth’s Chris started seeing some deflation in beef prices, but it’s at a much slower recovery rate than the brand originally anticipated, CFO Kristy Chipman said. To address some of these commodities shortcomings, Ruth’s Chris looks at making price adjustments. For this quarter, pricing stood at around 4 percent.

“We weighed several factors, and we're looking at that from pricing, do we think it's permanent or more transitory?” Henry said. “Do we believe that the guest and the consumer is willing to take the pricing on and that we can see that flow through or they start managing their check?”

Usually, Henry said Ruth’s Chris prices remain lower than competitors to provide customers with more value in the menu. But customers are more frequent now, and because of that, Ruth’s Chris has more flexibility with price depending on how consumers behave and how long pent-up demand for celebratory occasions last.

Slowly but surely, Ruth’s Chris is seeing an uptick in bookings even for the fourth quarter holiday season. This type of growth factors into the steakhouse chain’s plans to open seven company stores and three franchise restaurants by the end of 2022. New Jersey, Long Island, and Mount Pleasant are at the top of the list of markets to receive new units. Ruth’s Chris also anticipates the full-scale benefits of its new POS (point of sale) system to ramp up by 2022.

“All in all, we are a stronger and more nimble enterprise with a balance sheet that affords us flexibility as we navigate the ever-changing environment,” Henry said. “I am extremely proud of our team members and franchise partners and their continued efforts to deliver impressive results, while ensuring that the guest experience in our restaurants is reflective of the hospitality and amazing food that Ruth’s Chris Steak House has been known for over 56 years.”