There are three Cornbread Farm to Soul locations in Brooklyn and Maplewood and Newark, New Jersey.

A Refugee of Civil War, Adenah Bayoh Solidifies Herself as Industry Star

After becoming one of the youngest IHOP franchisees, the operator is now building her own quick-service concept in the Northeast.

Adenah Bayoh is a Liberian-born entrepreneur who operates eight restaurants, including four IHOP franchises. She came to U.S. as a teenager fleeing civil war.

Bayoh grew up in a village in rural Liberia where her grandmother helped raise her. She describes her as a “pioneer business woman.”

“When I think of my grandmother, I think of [political and social activist] Madam C.J. Walker,” Bayoh says. “She was a powerhouse.”

Bayoh’s grandmother had a farm and a restaurant, as well as several pieces of real estate. Some of her earliest memories are serving food in the restaurant and collecting rent from her grandmother’s tenants.

“My grandmother would send me to these little houses and I would go pick up envelopes, but the restaurant is where I really came alive,” she says. Working the register and chatting with customers gave Bayoh her first taste of hospitality

Her peaceful childhood, however, changed one night.

In the middle of the night, Bayoh and her family fleed their village in hopes of making it to Sierra Leone, where her father was from, to escape the civil war happening in Liberia.

“My cousins and uncles were pushing my grandmother in a wheelbarrow toward Sierra Leone,” she says. “At one point we had to leave my grandmother behind in another village so the rest of us could make it to Sierra Leone. That was the most devastating part for me.”

Bayoh and her family made it, but she couldn’t help thinking about her grandmother.

One night, while in Sierra Leone, Bayoh got up and walked back to where they had left her grandmother. The teenaged Bayoh managed to retrace her steps and locate the remote village in Liberia where her grandmother was waiting.

“She was in shock,” she says. “She asked me how I got there and I told her I had remembered every step since we left her.”

Bayoh and her grandmother reunited with the rest of their family. Bayoh says her father, who had already made the journey to the U.S., came back to Africa to help bring his daughter across the pond.

Making it to America was another chapter in Bayoh’s story, but it certainly wasn’t the last. She says she arrived with no more than a second- or third-grade education, but because of her age, was placed in a middle school class.

Initially, she was nervous about not being on the same reading level as her peers. One of her teachers, Mrs. Jackson, asked her to stay behind after class and Bayoh thought her American dream was coming to an end.

“I was petrified. I thought I had been found out,” she says. “I thought they were going to take me back to Africa and I started to cry.”

Her fears were misplaced. Bayoh’s teacher offered to help her with reading and writing. “Teacher’s like the ones I had in middle and high school are a large part of the reason I care so much about community today,” she says. “There were people in my community that saw the potential in me and told me I was smart … that I could be anything I wanted to be. I feel the need to be like a Mrs. Jackson to somebody else.” 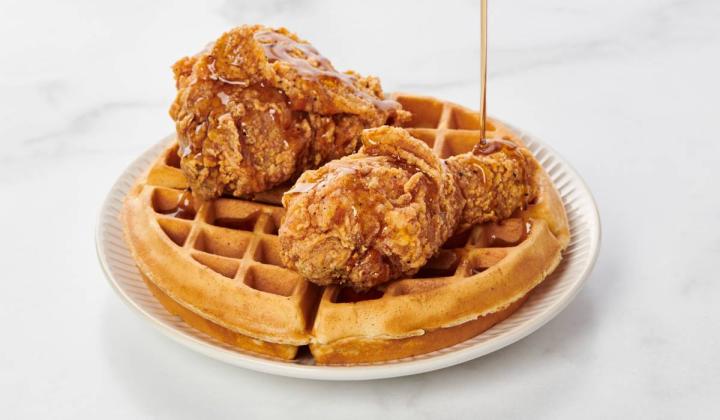 Fried chicken and waffles from Cornbread Farm to Soul.

Community is at the heart of everything Bayoh does. It’s the reason she decided to try and open an IHOP franchise at such a young age. She says growing up in Irvington, New Jersey, there wasn’t much in the way of dining options, describing the area as a “food desert.” In hopes of offering the community more, she headed out to seek a loan to help open her first IHOP.

It would take seven trips to seven different banks before Bayoh was able to secure the capital to get operations off the ground. She says one of the biggest challenges was convincing banks to give a young, Black, immigrant entrepreneur a $2.5 million loan.

“They had all sorts of reasons why they turned me down,” she says. “That was hard for me because the passion was there and the community [Irvington] needed it.”

Bayoh opened the doors to her first IHOP at 27. Irvington had one more dining option, but she wasn’t satisfied.

Bayoh wanted to give her community even more agency when it came time to eat, so she did something unconventional. She started adding her own recipes and menu items to the existing IHOP lineup in an effort to expand her customers' options.

What started off as a supplementary pot of grits to accommodate a regular turned into a handful of recipes revolving around soul food that became mainstays on the daily menu.

Items like chicken and waffles, collard greens, and cornbread were added at the request of community members who frequented the IHOP she ran. The newly added menu items became some of the top-selling dishes week after week, and Bayoh knew she was on to something.

The pop-up items would eventually be removed from the menu after some back-and-forth with corporate, but the success gave Bayoh the inspiration she needed to branch out. She says she spent time traveling across the country to different soul food restaurants.

About three years after debuting the pot of grits at her first IHOP, Bayoh opened the first Cornbread location in New Jersey.

One of the ways she gives back these days is by offering a second chance to formerly incarcerated people. “I don’t think we should judge someone’s whole life based on one terrible thing they did,” she says. “This program hasn’t been easy. It’s been really hard, but I feel like it is the right thing to do. We need to have more compassion.”

Compassion and community took Bayoh further than she dreamed. Today, she is gearing up to open the third location of Cornbread with her business partner, Elzadie Smith, in Brooklyn, New York, which she says will be the biggest test for her concept thus far. Cornbread is part of the expanding portfolio of independent black and brown-owned culinary brands funded by the New Voices Fund, a growth capital fund run by Richelieu Dennis, the founder of SheaMoisture and owner of Essence Ventures.

Two more locations, in Montclair, New Jersey and Jersey City, are in the pipeline as well.

Cornbread is a fast casual inspired by the recipes Bayoh debuted at the Irvington IHOP years ago.

The brand features digital kiosks for ordering. Bayoh adds the Brooklyn market seemed like a fit for the newest Cornbread because she believes customers will understand and embrace the fast-paced, modern concept.

Ultimately, Bayoh wants Cornbread to be the most successful restaurant franchise led by an African American woman, she says.

“Our purpose is to honor the communities we serve,” she says. “The mission is to be committed to taking care of each other.”