In the years since, the strategy hasn’t quite gone according to plan. At the time of purchase, the brand had 12 locations. That total has been whittled to eight restaurants across New York, Boston, New Jersey, Pennsylvania, and Washington, D.C.

Both executives entered the fold in September and were charged with changing every facet of Rosa Mexicano. Amid those early conversations, the most important word was, “energy,” Dunn says. Despite a strong name, loyal following, and nearly 40 years worth of history, the CEO saw a restaurant that had lost a step.

Within two weeks, Dunn changed the music playlist to Hispanic selections with upbeat rhythm and tempo. Uniforms were upgraded and restaurants received new flooring and mosaic patio tables and chairs.

In March, the store in New York City’s Union Square hosted an after-party for “Saturday Night Live.” The brand has also held gatherings for “Sex and the City” and “Gossip Girl,” two popular TV shows that recently relaunched on streaming service HBO Max. 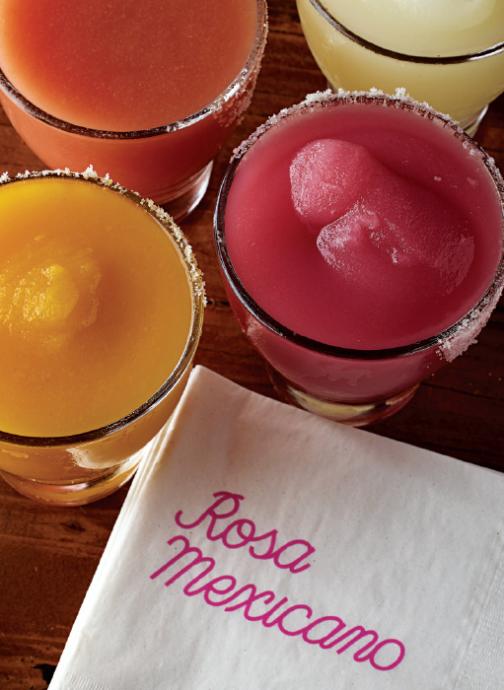 Now, the complete rebrand is more than underway.

“I wanted to spread our demographic a lot more. I wanted to really attract a younger clientele,” Dunn says. “It’s been around since 1984, and it has a fantastic following. But we want to make sure that, with all the cool stuff out there, both physically in Mexican restaurants and with the menu, that we stay up with the market.”

The biggest change was updating roughly 30 percent of the menu. The innovation was developed late last year and launched early in 2022.

Rosa leverages what Dunn calls a “high/low” menu that caters to everyone—from the premium, indulgent consumer to the value-oriented guest. The chain made sure to bring new tastes to each side.

“It’s like a heated platter on steroids,” Dunn says of the Parrilladas. “They go through the restaurant sizzling.”

The beverage program was enhanced, as well, with noteworthy cocktails like the Smokey Cosmorita, Spicy-Cucumber, and the Blood Orange Sunrise. But Rosa Mexicano made sure to keep the classics, like the Josefina Margarita (named after founder Josefina Howard), which has been served since 1984.

Because of the volatile supply chain, the brand paid close attention to sourcing, ensuring all ingredients would be available for the launch. Dunn says it’s been a nightmare at some points, like in February when the U.S. banned the import of avocados from Mexico for a short period.

Among all culinary changes, Rosa only had to pull one item—a sizable pork steak with cracklin—before menus went to print because the restaurant couldn’t guarantee consistent supply. But Dunn is hopeful it will make its way onto the menu in the future.

The CEO describes the launch as “a hell of an undertaking,” from ordering supplies and getting POS organized to situating the back-of-house inventory system and accurately updating recipes. That’s why it took about four months just to get everything properly aligned.

“We have some people that didn’t want anything to change for 30 years,” Dunn says. Classics were left alone, save for Trevino upgrading them or adding a small, personal spin. “It was trying to find that balance of what’s basically untouchable, what needs to remain, what is a great seller, and then trying to bring innovation into it with some new dishes,” he adds.

The CEO adds that many staff members are “juiced” to see the interior design upgrades, music, and food.

“Everybody’s just gotten an electric buzz and woken up, and the staff reaction has been unbelievable,” Dunn says. “Our people have been around for a long, long time—a lot of our staff on the floor, including the managers. So we’ve been very fortunate to hold onto people.”

The updated menu and restaurant aesthetics will be coupled with a growth trajectory the brand hasn’t seen in years.

Four new stores are scheduled to open in a matter of months, including two additional locations in existing markets Boston and Washington, D.C., and stores in new areas, Ardmore, Pennsylvania (just outside of Philadelphia), and West Hartford, Connecticut. As of early April, two were under construction, while the other two were in the final design stages.

“We’re lucky that we have enough of a reputation,” Dunn says. “Most of these markets, we’ve been able to find good people and be ready to start the training.”

Rosa Mexicano claims Josefina Howard became the first chef to introduce fine-dining Mexican food to the New York restaurant scene. Three decades later, Dunn is aware of what the brand must live up to as it continues with the refresh and expansion.

To him, the key is remembering that history, but allowing enough wiggle room to keep Rosa in the modern era.

“We have an incredible amount of hardcore regular fans that have been coming  for years and years, which is why I have to be careful that I don’t make the changes too radical,” Dunn says. “I just want to … bring in some more fun, contemporary things to broaden the demographic to new people in addition to this great following we already have.”

Another Broken Egg Dials In as Growth Heats Up
Fresh Vine Wine Partners with True Food Kitchen
Scofflaw Brewing Co. to Open at The Cotton Companies in Columbus, Georgia