Red Robin said there's an annual opportunity for at least $4 million in revenue if only 3 percent of loyalty members visit more than once.

Red Robin is hardly alone in its staffing saga. Per a Q1 report from Joblist, more than one in three hospitality employees were influenced to quit by people around them doing so. Only 10 percent looking for jobs said they expect to stick around a year. And of all the sectors polled, this was the most likely field to support unionization at 32 percent, perhaps a kickback of what’s unraveling at Starbucks.

Overall, nearly 48 million Americans quit their jobs in 2021. With more than 11 million current openings, or nearly two per unemployed worker, you could make the argument—at least today—candidates seem comfortable quitting one post without another one lined up. North of 80 percent of respondents who left their previous job told Joblist they did so unsure of their future. Simply, workers have more leverage than three years ago.

Restaurants added 61,000 employees in March, according to BLS data. That brought the industry’s total figure to roughly 11.54 million workers, which is 750,000 short of pre-COVID marks. Also, 863,000 leisure and hospitality employees quit in February, representing 21 percent of the private sector—the most since November.

Back in early March, Red Robin labeled staffing its top priority. Omicron and ensuing setbacks created urgency after what felt like an upward turn. The previous May, CEO Paul Murphy suggested to investors Red Robin was on the verge of getting “staffing put to bed, get it stabilized.”

Understandably, Red Robin couldn’t foresee the nature of the coming wave and how it would skew toward call-outs over restrictions. It led the burger chain to shift focus to hiring and training versus growing its Donatos Pizza footprint, which was scheduled to complete in 2022 with the onboarding of 200 more restaurants. Red Robin sliced the projection to 50 and said the remaining 150 will now come online by 2024.

The pizza menu produced $4.8 million in sales the year’s final quarter and exited 2021 at $14.4 million. Fully rolled, Donatos would be at 400 Red Robins and project more than $60 million in sales and profitability over $25 million.

Fifty locations are expected to add Donatos this year.

As noted, though, Red Robin’s staffing concern grabbed near-term precedent. The chain’s January same-store sales declined 1.1 percent, year-over-year, thanks to Omicron. As exclusions decreased, comps climbed 5.3 percent in February. Restaurants at or above 2019 staffing levels in Q4 saw same-store sales lift 6.1 percent on a two-year view. Compared to 2020, they were 49.3 percent higher. Red Robin’s systemwide result (not just at staffed-up units) was 40.1 percent above. So the gap was crystal.

The company brought on Wayne Davis as chief people officer in November to improve application flow and work with a third-party platform to drive recruitment.

It also implemented a more efficient management labor structure, reduced its menu (this was pared back as much as a third during the depths of COVID), and renegotiated leases. 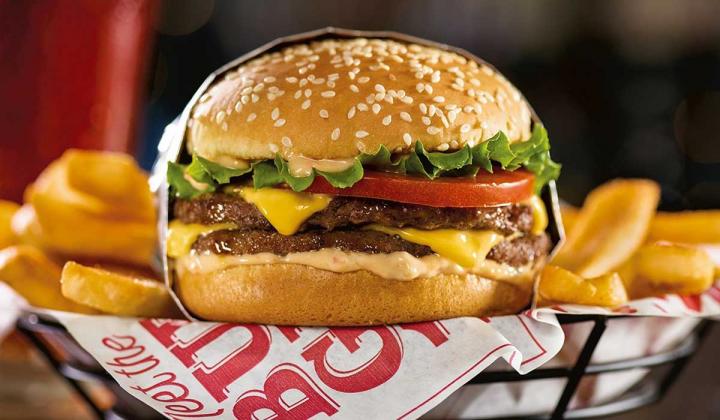 The company said it has a prescriptive plan in place for restaurants that remain low on labor, and is committed to removing obstacles for GMs, improving wage policies and training programs, and increasing the company’s talent pool.

Beyond the goal to have enough support to add complexity back (Donatos), Red Robin’s staffing stretches to one of Murphy’s early initiatives following his September 2019 hire, when he ended a lengthy CEO search that began with the April retirement of Denny Marie Post. Murphy, a Noodles & Company executive chairman, as well Del Taco CEO, championed a new hospitality model called “TGX,” or Total Guest Experience.

Headed into 2021, Red Robin recorded its highest guest satisfaction scores in company history. Murphy, speaking at the ICR Conference, credited TGX. It was a worthwhile notion given the COVID trends at hand and trying to predict which shifts to bank on.

Q4 2022 marked the seventh consecutive quarter of sustained off-premises sales of more than double pre-COVID levels for Red Robin. Off-premises mixed 31.4 percent of its business compared to about 14 percent in Q4 2019. But can Red Robin live off that burst?

Average-unit volumes in 2019 were $2.8 million. Last year, they were a shade under at $2.7 million. So even with elevated digital mix, the brand remains short of where it was pre-virus, highlighting the center of Red Robin’s recovery—the dining room.

It focuses on handheld technology where servers spend more time roaming dining rooms and less on side tasks, like ringing up orders and delivering food. A server inputs orders at the table as they come in from the guest. Meanwhile, Red Robin’s goal is to have a “server partner” who works in tandem. An example Murphy provided: A server dials in an order, the server partner gets drinks ready. In some cases, this results in drinks arriving before the full order is given.

Alongside better service, Red Robin believes this can unlock higher-margin alcohol sales. The faster a drink comes out, the quicker a second can be ordered. “We think we can influence over time the liquor percentage of the Red Robin brand,” Murphy said.

And TGX was far removed from prior setbacks. In 2018, Red Robin decided to eliminate bussers in a goal to cut $8 million and soften labor pressure from rising wage rates. Red Robin removed two positions and added table-cleaning duties to servers’ plates. It also asked hosts to handle carryout orders in addition to dine-in duties.

By August, weekend walkways skyrocketed 85 percent, year-over-year, as total ticket times out of the kitchen climbed about a minute on average. Wait times did, too. Customers stepped into Red Robins stuffed to the lobby walls. Tables were often empty, but not cleaned yet. Peak-hour business tumbled. Red Robin ignited staffing fixes then as well, especially the GM level.

TGX goes a step further, with a renewed focus on table turns and cleanliness. Servers conduct table checks frequently and upsell throughout.

Red Robin’s goal now is to use TGX to “to deliver fun and playful service that is tailored to our guests’ time and occasion,” the company said.

It’s no surprise Red Robin’s current marketing message—the “All the Fulls” campaign— “showcases the soul of the brand, delivering the brand promise: memorable moments connecting family, friends and fun, and a digital media strategy that reaches guests where and how they consume media.”

Restaurant margin split 17.9 and 14.3 percent in those same yearly comps.

Part of this ties to Red Robin’s heavy West Coast concentration and the challenges that’s carried with restrictions. California, Washington, Colorado, Arizona, and Oregon represent 44 percent of Red Robin’s total revenue and 35 percent of its footprint.

The company said it absorbed a sharper blow versus casual peers over the first half of 2021 in response. Today, there are 24 states with at least five company-run Red Robins. 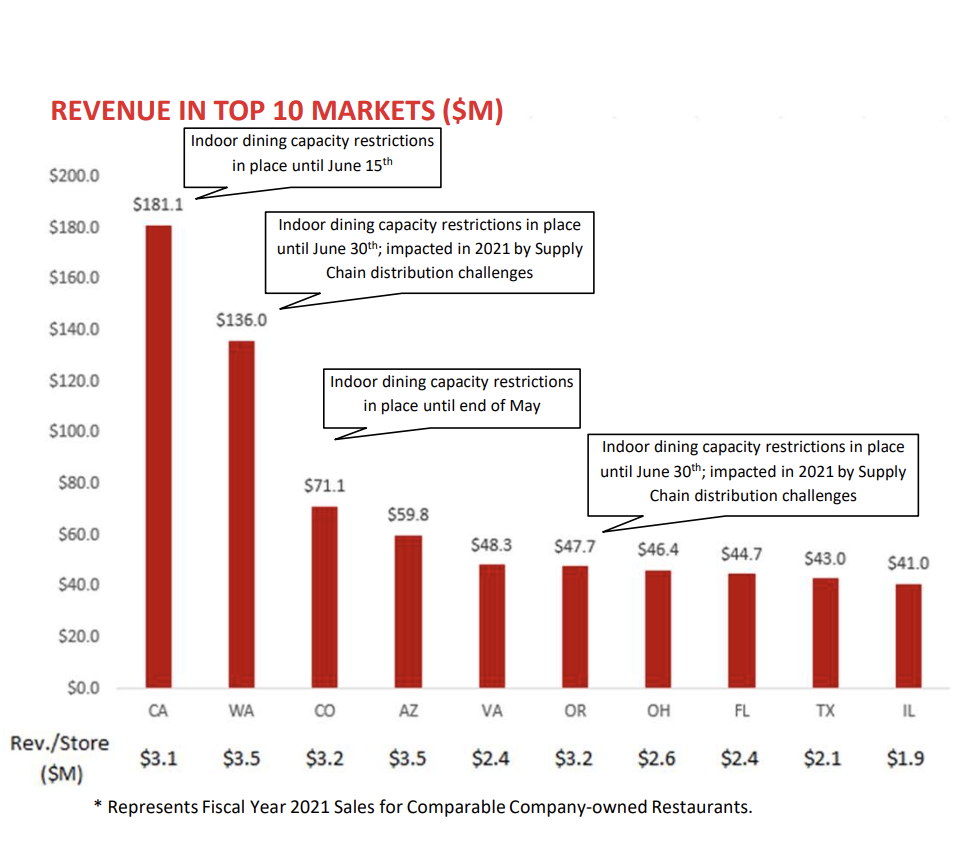 The chain has permanently closed 42 underperforming corporate locations since the beginning of 2019 and refranchised 12 in the Canadian market. But it wants to get back to growth, it said Wednesday. And that will materialize with a new prototype featuring enhanced dine-in, as well as off-premises and curbside service, plus an optimized kitchen layout.

The chain opened one in Q4 2021 that, through period 2, was pushing average weekly sales over $80,000. Red Robin will leverage the prototype to begin “modest” growth in 2023, the company noted. “With proven results, [we] will accelerate development in 2024 and beyond,” it added. 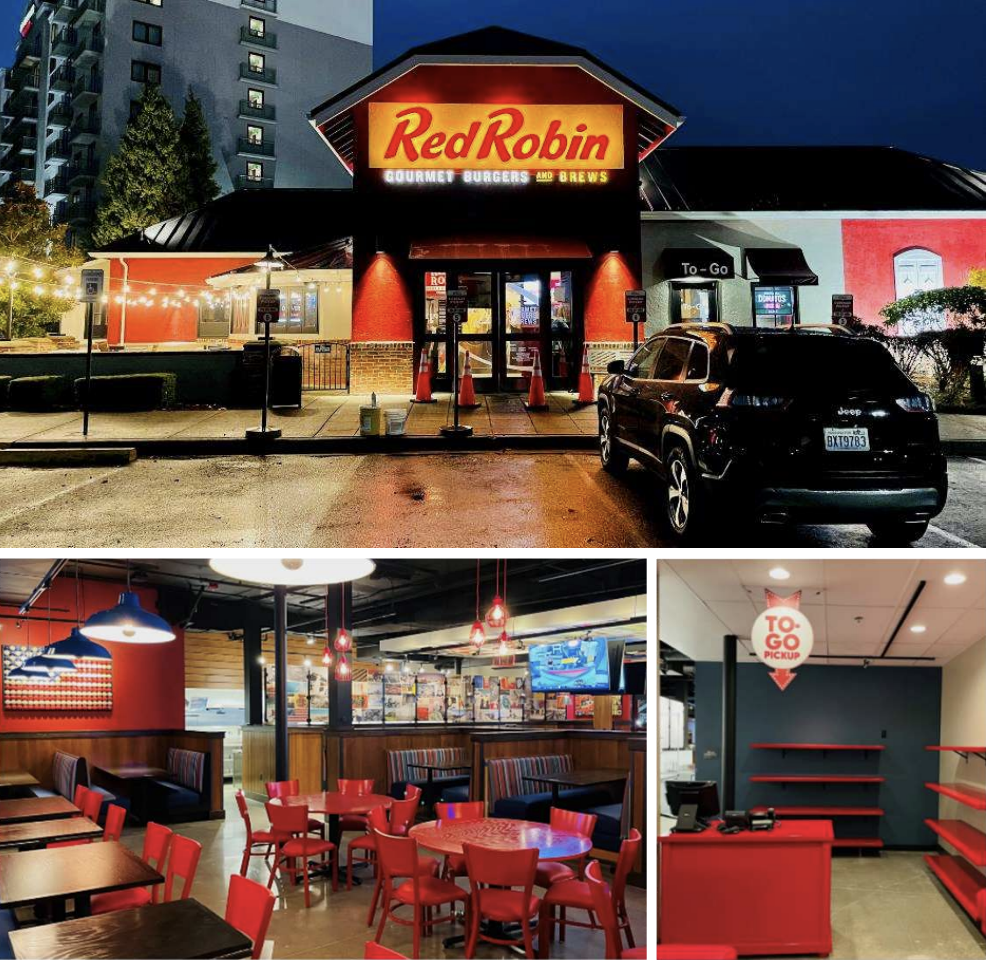 Red Robin launched its first mobile app on iOS and Android, a new loyalty platform, and a fresh website ordering experience (Q1 2022) as well. The chain has more than 10 million members in its loyalty ecosystem. The new design is built, Red Robin said, to generate higher order conversion while offering better upsell capabilities. Marketing began in 2022 to drive awareness and trial.

Red Robin uses loyalty to push incremental traffic via targeted marketing, which it bases on purchasing history. It sends fewer, more personalized emails and SMS to boost frequency among loyal users, and targets return rate with lapsed ones, the company said. “Royalty” members spend about 3X more than non-members over the course of a year.

As Red Robin outlined, there’s an annual opportunity for at least $4 million in revenue if only 3 percent of loyalty members visit more than once.

The company said it plans to deploy a new organic social media and content strategy with a “test and learn” approach starting in Q1 of this year.

Red Robin also launched three virtual brands in 2021 (Chicken Sammy’s, The Wing Dept., and Fresh Set.), and said roughly 70 percent of guests who tapped them had never visited the chain before.

Speaking more to Donatos, Red Robin is eager to move forward given restaurants serving the product pre-2021 posted comps up 8.1 percent in Q4 compared to 2019, without supply chain impacts. The rollout requires capital of $140,000 per store and pre-opening expense of $12,000 (three to four year payback period). There’s also incremental marketing spend of $30,000 per unit in the first year and incremental gross margin of about $45,000 per year, pear location in year 2 and beyond. Checks with pizza have been roughly $10 higher.

In March 2022, Red Robin completed a new $225 million, five-year credit agreement, it said will give it financial flexibility to strategically invest back in the business.

On the menu front, Red Robin has focused intently of late on LTOs, mainly with gourmet burgers. It launched a “Scorpion Gourmet Burger” in Q3 2021 that rose to the brand’s No. 5 mixing burger on its menu of 25-plus option. It was added as a permanent fixture.

Next came the “LTO Cheesy Bacon Fondue Burger” in Q4. That option climbed to No. 3 in the first week and was extended to run 20 weeks. Red Robin said it was the company’s strongest-performing LTO burger in the past decade.”