Combos and customization lead the way.

Like it did for an untold number of restaurant chains, COVID-19 forced Outback to pause and reflect. The landscape throughout March and April grew more complicated, and with it, Bloomin’ Brands’ 708-unit flagship became simpler. Lower mixing appetizers, entrees, and sides exited as Outback cut back about a third of its menu. The brand was “plussing up the stuff that we do so well," CEO David Deno said in July.

Bloomin’s P&L improved across several key areas, which pushed cash flow into positive territory. Cost of goods tracked only 10 basis points higher despite lower check averages. A streamlined menu reduced food waste to record low levels. And hourly labor as a percentage of sales fell 190 basis points in June, from pre-virus levels, thanks to a reduction in food prep hours. Removing complexity from Outback’s day-to-day took hours out of the back and boosted execution.

Following Q2, Bloomin’ leaders said the company, which also directs Carrabba’s, Bonefish, and Fleming’s, wouldn’t abandon COVID-19 efficiency learnings. It flipped sales from blended negative comps of 50 percent in late April to negative 17–19 percent in mid-July. In the three weeks running up, Bloomin also retained more than 50 percent of its off-premises volumes built up during dining-room closures in April.

THE COVID-19 ROAD SO FAR FOR BLOOMIN' BRANDS

Could a Post-COVID Outback Be Even Stronger than Before?

The Recovery is in Full Swing at Bloomin’ Brands

Bloomin’ Brands Gets a Jolt of COVID-19 Recovery Hope

Before COVID-19, Bloomin’ pushed about $10 million per week in total off-premises sales. It peaked around $32 million in April prior to reopenings. With most of the footprint back, Bloomin’ generated $23 million in off-premises dining in mid-July on $52 million of total sales.

Deno said then Outback wasn’t entirely sure which menu items would return and which wouldn’t, but these trends would factor in. Of Outback’s off-premises mix, to-go represented 55 percent, in-house delivery 13 percent, and the rest third-party.

On Tuesday, the company unveiled that updated menu. It focuses on steak, value, and larger portions.

“Our team members are so excited to serve this new menu to our guests. After operating on a limited menu, we are bringing back some favorite items as well as some new additions, quality improvements and lower prices,” Brett Patterson, president of Outback, said in a statement. 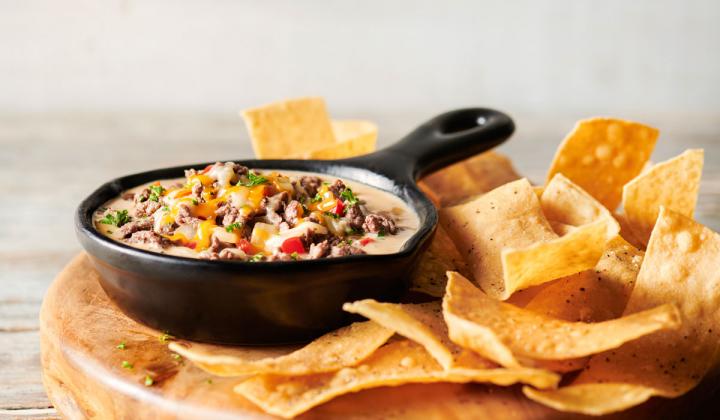 The combos include pairing such as:

Outback said the updated menu is easier to navigate. Namely, it separates steaks by cooking style—Season & Seared, Slow-Roasted, and Char-Grilled. That latter offers a new thick cut Bone-In NY Strip. Prices were adjusted in many cases as well.

“We know value is important to our guests, especially now,” added Danielle Vona, Outback’s chief marketing officer. “In addition to adding a second side to most entrées, we’ve lowered prices on some of our signature appetizers as well as some of our larger cuts of steak.”

Here are some other fresh options:

Outback has steadily climbed its way back from the COVID-19 sales trough. In mid-July, 129 restaurants across Bloomin’s portfolio (105 of which were Outbacks) posted positive same-store sales. Half of those were in the South, despite case surges (roughly 21 percent of Bloomin’s corporate stores reside in its home base of Florida).

Overall, in the week ending July 19, Outback’s same-store sales declined just 10.7 percent versus the prior year at 527 restaurants open with partial dine-in service. Only 36 remained restricted to off-premises only, and they fell 38.6 percent. Heading into August, Outback’s same-store sales (at reopened units) stayed under negative 13.6 percent every week since the end of May.

Nearly all of Bloomin’s domestic restaurants (92 percent) were reopened with limited in-restaurant dining capacity as of July 19.

The company sees this as a chance to reposition assets for a changing landscape. With real estate opening up from widespread industry closures, Outback will have a chance to move restaurants to more convenient trade areas, and build updated units designed to capture off-premises business, Deno said in Q2. Expect to see more to-go rooms and delivery-focused assets. It previously set a target of 100 Outbacks it could relocate.

Before coronavirus, over a four or so year span, Outback spent $400 million in remodels to contemporize the brand and improve curb appeal, and another $50 million on customer experience. Of that, $30 million was dedicated to food quality—portion enhancements and reducing complexity—and $20 million on service, training, and labor.