It isn’t the only virtual strategy unfurling for Bloomin’.

Tender Shack is now available in more than 700 locations.

There’s some prevailing logic behind why restaurant chains launch virtual brands. The low-capital investment. The ability to seed demand without physical infrastructure. An attempt to level the product-crazed playing field of third-party delivery. People looking for chicken tenders on DoorDash probably aren’t searching for a casual-dining steakhouse, for instance.

To date, 80 percent of the company’s customers for Tender Shack, its virtual concept, have never ordered from any of Bloomin’s legacy brands. That includes Outback, Carrabba’s, Fleming’s, and Bonefish Grill.

“And so we believe that this business can certainly stand on its own and we can grow it from there,” Deno said during a conference call.

Alongside its Q4 earnings, Bloomin’ announced Thursday it’s taking Tender Shack, which debuted September in Tampa, Florida, national through DoorDash, all the way to Hawaii. It’s now live in 725 locations, primarily operating out of Outback and Carrabba’s kitchens.

Deno said Bloomin’s goal is to achieve $75 million in incremental sales on an annualized basis. And getting there won’t require Bloomin’ to concern itself with that 80 percent figure. Deno called the path, “guerilla marketing.” Meaning Bloomin’ will use its experience and current channels to spread awareness, yet do so without co-branding with Outback or its other chains. In other terms, it will direct Tender Shack from the proverbial shadows and let it speak for itself. “There's no greater marketing than great operations and great product,” Deno said.

“Chicken is a very large category,” he added.

Tender Shack offers a limited menu fulfilled from Bloomin’s current equipment. Chicken tenders, sandwiches, fries, cookies, and drinks. As the brand rolled, first in Bloomin’s backyard in Tampa, then to 13 additional markets—all outside Florida—Deno said it was clear the company had a winner. “The brand exceeded all of our sales, profit, guests and operating metrics,” he said.

Tender Shack’s guest follows a different ordering pattern, during different times of day than Outback. Some restaurants have generated more than $1,500 per week in sales. And this is just via DoorDash without any significant advertising behind it. Also, the numbers don’t include franchise partners or Brazil.

Tender Shack isn’t the only virtual strategy unfurling for Bloomin’. The company’s Aussie Grill fast casual is being run as a virtual concept in Brazil and Hong Kong. It’s also currently in pilot in New York to see if a broader menu “is more interesting than Tender Shack” to that audience, Deno said. New Aussie Grills are slated for Hong Kong and Saudi Arabia, and four more are on deck for the Tampa area.

Aussie Grill, Outback’s spin-off counter-service model, was originally created for international franchisees hoping to scale quicker with a smaller footprint. The first opened January 2019 in Saudi Arabia. Today, there are two domestic shopping mall units and a free-standing venue that came to market in May, also in Tampa Bay. Originally meant as an incubator to test ideas for international menus, the brand gained traction during COVID. Namely, the latest version includes a drive thru attached to a 687-square-foot box.

“Obviously, we're opening it because we like the volumes and profitability we see out of that business,” Deno said.

There are 19 Aussie Grill virtual businesses in Brazil currently, with plans to get to 50.

“We will continue to examine delivery-only restaurants or different asset configurations in our sit-down restaurants or the virtual brand opportunity with Tender Shack,” CFO Chris Meyer said. “All those things are part of our overall asset portfolio.”

"We're obsessed with tenders—and we know consumers are, too," Kristy Jobe, a Tender Shack spokesperson, said in a statement. "We're going all-in to deliver the best chicken tenders to all the tendie-loving folks out there." 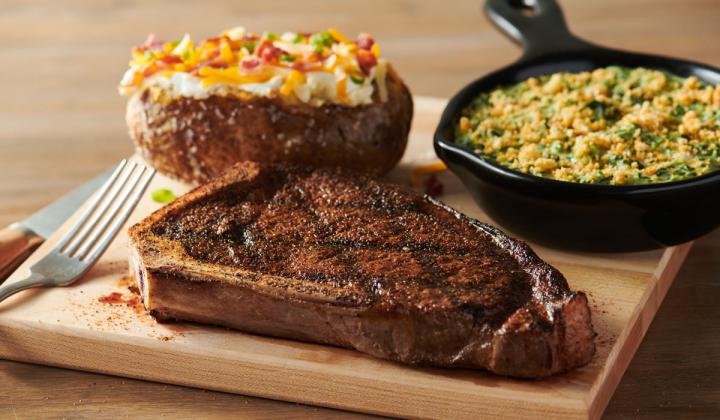 Outback's new menu is all about steak.

Along with Tender Shack, Bloomin’ credited one other major initiative of 2020 for its current trajectory: A new Outback menu that launched in September 2020, which is outperforming test markets.

Thus far, Deno said Outback’s witnessed strong customer preference as guests trade up to larger cuts of steak, appreciate larger portions, and increase attachment rate on appetizers thanks to the lower prices. Additionally, Outback’s efficient menu design reduced complexity and improved consistency. It also led to “record low levels of waste” over the back half of the year.

In terms of Q4 adjusted performance by cost category, COGS was 60 basis points favorable, year-over-year, thanks to that cutback. The company is in the midst of a two-year plan to simplify overhead structure and save $40 million. About $25 million was realized in 2020, with most of the benefits impacting the G&A line, Meyer said. The cumulative total after 2021 will present 100 basis points of operating margin improvement from 2019, when adjusted operating margins were 4.8 percent on $4.1 billion of total revenues.

For more perspective on the menu initiative, before the switch, Outback had six menus present on the table for guests. Everything from drinks to LTOs to Happy Hour. “The amount of time that it took a server to articulate all these menus was inefficient. So simple things like that, honestly … they add up in a redefined service model that we think can be far more efficient moving forward than it was coming into this. And that's just the front of the house,” Meyer said.

In the back, Outback’s been able to significantly reduce prep hours.

So far in Q1, U.S. comps improved to negative 12.9 percent. Dining rooms reopened throughout January. And as of Thursday, 99 percent of Bloomin’s domestic stores were open for some level of in-restaurant dining.

For the seven-week period leading up to February 14:

“There are several factors likely contributing to this momentum, including the reopening of dining rooms, the benefits from government stimulus and, most importantly, momentum behind our growth initiative,” Meyer said.

This past quarter, though, off-premises represented 37 percent of Bloomin’s domestic business. It mixed 40 and 46 percent at Outback and Carrabba’s, respectively.

Bloomin’ worked on expanding this corner of its business well before COVID, investing in white-label channels as well remodeled real estate. “Mix is important. But total revenue per channel is really important,” Deno said. “And our goal, which we are seeing in the first quarter, by the way, as restaurants reopen, our goal is to keep that revenue, profitable revenue and grow it from there.”

“We think about these channels entirely differently,” he added. “So you've got in-restaurant experience and you have a carryout experience and delivery experience. We talked today about Tender Shack. So, these all come together to provide the customer experience. And because it's a largely incremental business, it's a profitable business that flows through to us. And we are very, very, very mindful of the consumer measures that drive success, like delivery times, customer satisfaction, accuracy.”

Deno said Outback, in particular, has an opportunity to expand its footprint. Bloomin’ is testing a smaller building, which it’s done successfully in Brazil. He said a delivery-enabled, smaller unit “makes a lot of sense,” and could unlock expansion. The brand has already done 50 or so Outback relocations and those are generating north of $5 million in revenue with solid profitability and cash flow. “When you have restaurants doing well over $5 million, it's clear that the brand is very highly regarded. And we were just real estate disadvantaged in certain cases and we're trying to correct that,” Deno said.

While still early, he added they’ve see 5–10 percent closures across the restaurant landscape, with a lot of them being independents. He believes it could settle in the 5–15 percent range.

“And we're obviously monitoring that very carefully. We don't wish any ill will on any restaurant operator,” Deno said. “But I think you can imagine, this has enabled real estate opportunities for us for relocations at Outback, new restaurants, et cetera. And we are prepared to, and we have the muscle to go in and do that.”